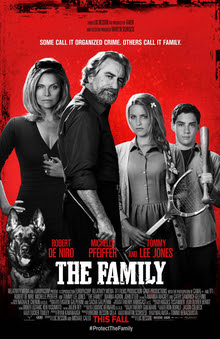 If movies have taught me anything about the Mafia, one thing rises above all else. Don't turn on the Family. They will get you for it and make you pay for it. What about those who do and get away with it? Well, kinda get away it. Let's get going with 2013's The Family.

It's the middle of the night in Normandy and the Blake family has arrived, their furniture, clothes and possessions waiting for them in a quiet, corner house. They move in glumly, unpacking and getting ready to set up their new lives. There's a problem though. This isn't really the Blake family. This is the Manzoni family, including patriarch Giovanni (Robert De Niro), a former Mafia family from New York City now in the Witness Protection program. Giovanni and his wife, Maggie (Michelle Pfeiffer), and their kids, Belle (Dianna Agron) and Warren (John D'Leo), keep getting in trouble though, forcing them to move from town to town all over Europe with the FBI's help and surveillance. They keep reverting to their old ways, forcing the FBI to keep moving them. Their idyllic lives (of sorts) could be in trouble though. Giovanni testified against his former mob boss (Stan Carp) after a failed hit, and wasting away in jail, he's enlisted the help of a hitman to find the Manzonis and kill them.

There sure are a lot of movies out there, huh? Great lead-in, right? I mean it though. This dark Mafia comedy was released in theaters last summer without much in the way of fanfare or positive reviews, but it did okay in theaters, earning over $68 million. It's one of many movies I was aware of, knew what it was about and had some interest in seeing. But getting to the theaters proves to be kinda difficult at times so here we sit courtesy of Netflix. The complaints in negative reviews were pretty much across the board from too violent to too schizophrenic to too goofy. I'm not saying this was a classic movie by any means, but I was entertained throughout, a talented cast and an interesting premise rising above some of its flaws. I find myself saying it more and more as I defend movies, but is it so wrong to just be entertained by a movie?

For starters, 'Family' is very stylish and very dark. It wastes no time revealing its darkness, the lead hit man, Rocco (Jon Freda), blowing away a whole family in the opening scene, an innocent family at that as he suspects they're the Manzonis. That's the whole tone of the movie, the moments where that schizo nature works well. The line "You can take the boy out of the country, but you can't take the country out of the boy" kept coming up for me. You can move this Mafia family to France, but they're still a tough, hard-edged, take no prisoners family. Giovanni still resorts to strong arm tactics to get what he needs (including drastic measures to get clear water, not brown water from the faucet), Maggie doesn't appreciate the American hate and takes out a grocery store, Belle fights off the "charms" of the locals and young Warren sets up a crime ring within days. It's these moments that are the most fun. Even better? Giovanni's mental asides as we see what he'd like to do to those who come up against him for any number of reasons.

I didn't understand the hate some reviews had, mostly because of the cast. The last couple years have been up and down for De Niro with some of his roles, but he shows off here that he as good a dramatic actor as he is, he's also a really funny actor. He doesn't try too hard. He just is funny, getting the laugh from playing a ridiculously brutal straight man. His facial expressions are priceless, his deadpan deliveries even better. He's got an excellent chemistry with Pfeiffer as his wife, a similarly dark, funny part. Her highlight? Her confession to the village priest is so startling (we don't hear it) that the priest wants nothing to do with her. The kids have their moments too, virginal Belle turning back advances from some less than smooth village boys, turning her attention to a dreamy college student/teacher while Warren gets beat up badly the first day at school and goes to work setting up his own little crime ring. As bizarre and dark and goofy as this group is, I liked them all.

There's more though, starting with Tommy Lee Jones as Agent Robert Stansfield, the FBI agent placed in charge of the Manzonis as they move from one place to another in Witness Protection. Jimmy Palumbo and Domenick Lombardozzi have some fun too as the two surveillance agents assigned as security over the Manzonis in their cozy French house.

It all builds to an inevitable showdown, the Mafia finally tracking them down in their new French home. A squad of Italian hit men descend on the village, the Manzonis forced to improvise as they come under attack. There's some cool action in this finale, even if it is more than a little ridiculous in the end results. That's the movie in itself. It is all over the place, struggling to find that one tone that works and sticking with it. The script at times in director Luc Besson's film depends far too much on coincidence -- like how the Mafia finds Giovanni and Co., not to mention finding the house -- for my liking, but the moments that work, really work. How about Giovanni (posing as a writer) asked to be a guest speaker at a film screening, originally intended to be Some Came Running but it ends up being....Goodfellas. Yes, it's a self-conscious script/movie decision (De Niro starred in said movie) but it works and the payoff is excellent.