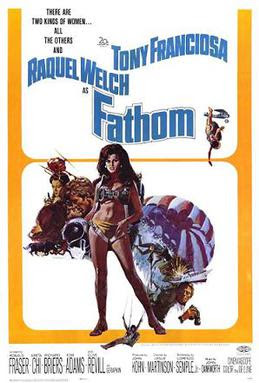 James Bond, Derek Flint, Matt Helms, even the more straight-laced British spy Harry Palmer played by Michael Caine. The 1960s had countless spy and espionage movies for audiences that ate them up. A whole lot of testosterone, huh? How about a female secret agent navigating some international intrigue? I've long been aware of this one and was finally able to catch up with it, 1967's Fathom.

An American skydiver touring Europe with a U.S. parachuting team, Fathom Harvill (Raquel Welch) has become quite the attraction for audiences. Well, now she's getting some attention for another reason. After one successful jump, Fathom is approached by a mysterious security officer, Colonel Douglas Campbell (Ronald Fraser), who enlists her help in a matter of worldwide peace. A trigger/detonator -- dubbed the Fire Dragon -- that can set off a nuclear device has gone missing. The trail has led Campbell to a countryside Spanish villa where an agent working for the Chinese, Peter Merriwether (Tony Franciosa), is staying. With no other alternative to getting into the villa, Fathom will have to parachute in, pretending to have gone off course and accidentally landing at the villa. Find the Fire Dragon, get out and return it. Simple, right? Not everyone is telling her all she needs to know.

This is a fun movie. That's all, and that's not a bad thing so deal with it. From director Leslie H. Martinson, 'Fathom' has that 1960s style that can be so fun to watch now, look back and appreciate. The 1960s are my favorite decade for movies, and while this isn't an all-time classic (far from it), it's what can be so fun about the decade as a whole. It's goal is to be fun, to entertain, to put pretty people in pretty places with some witty repartee (and some subtle sexual innuendos. Scandalous!). 'Fathom' was filmed on location in the Spanish coast and countryside in and around Cartama, Mijas, Malaga, Torremolinos, and Nerja in Andalucia. It is a gorgeous-looking movie, Spain providing quite the visual backdrop....in addition to other things to come. There's also a dreamy theme song, listen and more importantly watch it HERE, with a good score from John Dankworth. The message is simple. This isn't a hard-hitting spy movie. It's not quite a spoof, just somewhere fun in between.

Blah blah blah, let's talk about Raquel Welch! One of the biggest sex symbols of the 1960s (and in Hollywood history in general), Welch was coming off the immensely successful One Million Years, B.C. that really put her and her fur bikini on the map. This is Miss Welch at her best. With the right part in a more dramatic movie, she did have some acting chops she could show off. This is more suited to her comedic ability, a lighter, more fun role that doesn't strain any acting muscles. Welch was a better comedic actress than she's given credit for, and this is a good follow-up rule to her speech-limited part in 'Million.' This movie was one of three female spy movies from Warner Bros. in 1967, and it's not a mystery why this one was remembered better than Caprice (starring Doris Day) and Come Spy With Me (starring Andrea Dromm). It's Raquel Welch.

Let's not misconstrue this, and yes, it's time to be a shallow dude. Raquel Welch is sexy, beautiful and taking her status as a 1960s sex symbol quite, quite seriously. Yes, there's a twisting story with a whuddunnit mystery, but let's get down to basics. This movie exists to get Welch into as many skimpy outfits as humanly possible. We're talking bikinis, short skirts, tight jumpsuits, plunging necklines, any and all. I've long had a crush on Raquel Welch, but I don't know if she ever looked as downright good-looking as she did here. And so ends a rant from this shallow guy. If you're a Welch fan, you'll like this movie.

But onto actual movie analysis! The cast supporting Welch is having some fun, none of the characters telling the complete truth and all of them having a secret or two. Actually the top-billed star here, Franciosa does what he does best, a roguish charming renegade, here as Merriwether, an agent working for the Chinese. He has a great chemistry with Welch, calling her 'Poppet' for some reason. He also gets some help from Greta Chi's Major Jo-May Soon, a real-life Chinese agent. Having some fun as the security officer who sends Fathom on her mission, Fraser does a good job as the equally mysterious Col. Douglas, Richard Briers playing his assistant, Lt. Timothy Webb, who has an interest in Welch's Fathom. Also hamming it up in Bond villain-esque mode is Clive Revill as Serapkin, the monocle-wearing Russian black market dealer with a low body temperature, forcing him to...."seek warmth" with Fathom at basically all times. Also look for Tom Adams (a supporting player in The Great Escape) as Mike, a hotel owner with an interest in everything going on.

In a 99-minute movie, 'Fathom' packs one surprise/twist on top of each other in waves. We're never sure who's working with who, which side is trying to scam Fathom out of the Fire Dragon (it ain't what it seems), and who will end up with it in the end. Getting there? Basically nonstop action, lots of fun, some cool stunts that force Welch to run, jump and fly across Spain. A very entertaining movie throughout.