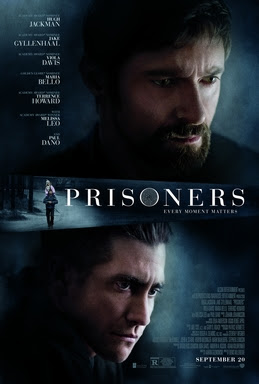 It was a movie that seemed like it was a sure thing to snag some Oscar nominations. Powerful, dramatic acting, incredibly dark subject matter, and a whole lot of talent assembled for a cast. And what did 2013's Prisoners get nominated for? Exactly....one, that nomination for Best Cinematography. Okay, yes, that's fair. It's certainly a visually interesting film, but nothing else?!? Come on now. So....anyways, yeah, this was an excellent movie.

On a gloomy, rainy Thanksgiving Day, Keller Dover (Hugh Jackman) and his family walk down the street to celebrate the holiday with their neighbors, the Birch's. After dinner as the Dovers get ready to go, they realize their daughter and the Birch's youngest daughter are both missing, nowhere to be found. Minutes turn to hours, hours to a day, and there's no trace of either girl. The police are called in, including lead detective David Loki (Jake Gyllenhaal), a suspect, Alex Jones (Paul Dano), found just a few hours after the disappearance was first reported. Looking for clues/evidence tying Jones to the girls though, the police come up empty and are forced to release him after a 48-hour hold. Keller remains convinced that Jones is the one who kidnapped the two girls and decides to take drastic measures to bring them back. All the while, Loki becomes progressively more obsessed with the case, leads drying up in one dead end after another. The clock is ticking for the two girls.

From director Denis Villeneuve and writer Aaron Guzkowski, this movie is a doozy. Movies about serial killers, murderers, diseases running rampant, they can all be uncomfortable in countless ways. But as for a movie about someone kidnapping two young children? Unsettling doesn't begin to describe that ever-developing story. I watched this one, and I couldn't help but think of my five-year old niece. This is a movie that isn't intended to entertain (obviously) but one you appreciate. Audiences responded to the film, 'Prisoners' earning $122 million, and it's easy to see why. The acting here is what acting is all about. It's human and real, and when it calls for some big, dramatic moments, it doesn't feel authentic. It is authentic, credit to Villeneuve and cinematographer Roger Deakins for making a film with a bleak, dreary look that doesn't pull any punches. Deakins picked up an Oscar nomination for his cinematography. Tough to see him winning against Nebraska or Gravity, but he deserved that nomination.

The 2013 film year was very loaded when it comes to acting, especially for Best Actor and Best Supporting Actor. Maybe the issue here was deciding between Jackman and Gyllenhaal in nominations? These are two powerhouse performances and for different reasons. A family man and middle-class dad torn apart by his daughter's kidnapping? A detective with a troubled childhood past who similarly becomes obsessed with finding two missing girls? These are great parts, both actors stepping up to the plate and delivering. Jackman handles his role in the right way with scenes that could feel forced or overdone. He's driven down a road that most would never want to even contemplate, but he's going to get his daughter back. He doesn't care what he does, if it's right, morally or in the eyes of the law, or what his decisions will ultimately do to him. I thought Gyllenhaal's part was underrated, reminding me some of his part in Zodiac. His detective is tough, brutally efficient and the pressure is starting to wear on him, especially with Jackman's Keller pressuring him to close the case and bring his daughters back.

Brace yourself for the rest of the cast though. It is a halfway decent group if you're into that sort of thing. Maria Bello plays Keller's wife, Grace, progressively losing her mind as hours turn into days, needing her husband more than ever as he takes desperate measures to get their child back, Dylan Minnette playing their teenage son. The parents of the second kidnapped girl are played to perfection by Terrence Howard and Viola Davis while Zoe Borde plays their teenage daughter. Dano seems to be typecast a bit as the possibly crazy/unhinged guy but there's a reason. He's good at it, really good. We're never quite sure of his intentions, his background, his motivation, Melissa Leo playing his aunt. Also look for Wayne Duvall, Len Cariou and David Dastmalchian in key supporting parts.

Beyond the general uncomfortable feeling in tone and emotion that basically permeates every single scene in a 153-minute movie (It never drags), what makes it especially memorable and tolerable is that the story becomes a whudunnit story. Yes, obviously, we want to see the girls rescued. But as clues and leads and evidence dry up, we also want to see who did the kidnapping. Why did they do it? Guzkowski's script does a great job keeping us guessing right until the reveal. Hints are dropped here and there, but it's difficult to peg everything down as it comes along. Uncomfortable? Yes, but the mystery aspect makes it interesting on a far different level.

It all builds to an impressive reveal and finale, including a great final scene. Some viewers/critics call it ambiguous, but it really isn't if you think it through. I very much liked this movie, or at least as much as you're supposed to like a movie about child kidnapping. Appreciate it for the top to bottom strengths of the cast.