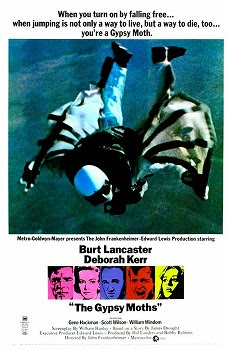 Skydiving has always fascinated me, but I've never had the guts to do it. Odd considering I'm typically scared to death of heights, huh? Meh, big deal! Years ago on a DVD I can't remember, I caught a trailer for a movie from the 1960s about skydiving with a great cast that looked like a light, fun and entertaining flick. Well, I caught up with how many years later, and let me tell you, 1969's The Gypsy Moths ain't what I thought it was going to be.

It's the Fourth of July weekend when a three-man skydiving team, Mike Rettig (Burt Lancaster), an experienced diver, Joe Browdy (Gene Hackman), the motor-mouthed owner/diver, and Malcolm Webson (Scott Wilson), a young but talented diver, drive into a small Kansas town looking to put on a show and make some cash. Malcolm grew up in the little town, the group even staying at the home of some of Malcolm's family. Their mindsets on basically everything is vastly different from the townspeople, including the family, causing some riffs between the barnstorming skydivers and the town-based population. Joe's team gets out on the town though, advertising and getting the word out about their coming show. It won't be easy to put the show together though with weather concerns, and those problems are amplified when the group argues over whether Mike should do a dangerous cape jump as a grand finale.

This 1969 flick comes from one of my favorite directors, John Frankenheimer, the man behind The Train, The Manchurian Candidate and Seven Days in May among others. 'Moths' never got a full theatrical release in the United States, audiences only discovering it years later. The reasoning? My guess would be it was a couple years too early. In the 1970s, this movie may have flourished. There's surprising amounts of nudity, a forthright attitude about sex, adultery, life in general. Whatever the reason though, it didn't really get a chance with American audiences. Frankenheimer has even said in interviews that this was his favorite film he directed. That's all the convincing I need, but in very disappointing fashion, the movie doesn't amount to a great final package.

Some of that definitely comes from a perception of mine because I thought I was getting a different movie. That's not all of it though. I adjusted and went with a far darker story than I thought I would be watching. The screenplay from William Hanley looks to give a little slice of smalltown America and what better time to do that than a 4th of July weekend? Frankenheimer filmed on location all around Kansas, giving an authenticity that wouldn't work if it was filmed on a Hollywood backlot. It doesn't translate overall though. I think the movie is too thoughtful, too introspective, too brooding for its own good. These skydivers sure are moody, depressed, fighting amongst themselves and instantly clashing with the townspeople with their callous(?) outlooks on life. The first hour is painfully slow and so darkly down and depressing that I couldn't get into it at all. For me, that's saying something. I'm usually a big proponent of the darker the better in terms of story.

Whatever the tone though, 'Moths' has quite the cast. Are they used well? Eh, not really. I didn't really understand Lancaster's Mike character. He's a longtime skydiving veteran, an adrenaline junkie who's beginning to see the adrenaline wear off. Are his skydiving days beyond him? He may have found a future with Deborah Kerr's Elizabeth Brandon, a married woman and Malcolm's quasi-aunt. They're instantly drawn to each other, but it's never clear why. As near as I can figure, they're drawn to something different, Mike a settled down life with a wife and family, Elizabeth a wild and free life lived on the road to the fullest. Mostly, this relationship comes out of nowhere, one of those horrible movie relationships where two people fall for each other immediately with some knowing looks. This affair/relationship does push the story to some surprising twists, but the twist didn't have quite the dramatic shock I'm assuming was intended. Surprising? Yes. Effective dramatically? Eh, not quite.

The rest of the cast okay, nothing special. There is a chemistry among Lancaster, Hackman and Wilson, but there's not enough of it. When it does come around, it's too late. Hackman is solid as ever, a fast-talking charmer, the engine that makes the team go. He meets and clicks with a waitress (Sheree North, topless dancing and all) immediately as the skydiving show fast approaches. Wilson is moody and worrying and quiet as Malcolm, an underdeveloped character that falls for a young boarder, Annie (Bonnie Bedelia), at her aunt's home. These are all potentially interesting characters, but something just doesn't click to bring it all together. Also look for William Windom as Kerr's husband, seemingly seeing what's going on but not doing much about it.

The final 45 minutes at least make an effort to get the audience's adrenaline pumping. After all the introspective, slow-moving drama of the first hour, it is desperately needed as the skydiving team heads to their show. The footage is pretty crazy, cameramen jumping with the actual skydivers to get some great skydiving action. There are these ridiculous moments where you sit back and think "Man, that guy is hanging off the plane's wing waiting to drop. What if his parachute doesn't open?" The skydiving footage is the high point of the movie, no doubt about it, but it wasn't enough to save this Frankenheimer film for me. Unfortunate end result, a disappointing effort in the end that never connects.