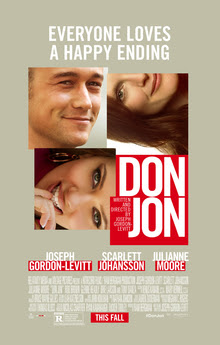 Is there a bigger rising star out there right now than Joseph Gordon-Levitt? The child star of 3rd Rock from the Sun has turned himself into a legitimate dramatic and comedic actor since then with countless roles like The Lookout, The Dark Knight Rises, 500 Days of Summer, Inception and Looper. Well, he's stepping behind the camera now, starring in while also writing and directing 2013's Don Jon.

I'm not sure what I was expecting heading into this movie. I saw the trailer. I was intrigued from the cast to the pretty racy story and a lot in between. Director/writer/star Gordon-Levitt received almost uniformly positive reviews for his film, and I did know what it was about. I swear. So what happened? I really didn't like it. It's funny, but not funny in the way you'd think it would be. Who knows? Maybe it was supposed to be funny in a painfully awkward way, but I was groaning and groaning early and often.

Did you watch MTV's Jersey Shore during its infamous run? I'm not proud to admit it, but I did. It was like a trainwreck episode in and episode out. Can you see where I'm going with this? Gordon-Levitt's Jon could have been plucked right out of the show without missing a beat. Above all else, above any other criticisms I had, I just didn't like the main character. He's such a cliched stereotype of a club-hopping, one-night stand seeking tool with his muscle shirts and heavily-gelled hair that it's hard to sympathize with him in the slightest. He preens, struts, smirks and mumbles his way through life. There are moments that provide some laughs, his weekly confessions at church totaling up the times he had sex with a girl and times he masturbated while watching porn especially. You laugh, but it's almost uncomfortable. Confession cures all though, right? Joseph Gordon-Levitt is a very talented actor, but I couldn't stand this character.

Scarlett Johansson is my big crush out there so her part here was a big selling point. Her part is excellent if frightening in its craziness as more and more is revealed. Shallow dude moment, but she looks good....craziness aside. Julianne Moore has an interesting part as Esther, a woman Jon meets at a night class he's taking. Moore is okay in the part, but I'm not sure if it is the right casting choice. Tony Danza and Glenne Headley are high points as Jon's parents, his Dad getting in constant screaming matches, his Mom nagging him about finding the right girl and settling down. Brie Larson is good too as Jon's younger sister. Also look for Rob Brown and Jeremy Luke as Jon's best friends.

In a 90-minute movie, the first hour was rough to get through while the last half hour was far more tolerable. It doesn't play like an instructional guide to how to be a Club Tool, actually exploring some human emotions. Personally, it was a case of too little too late. The ending does provide a saving grace of sorts, but the first hour left such a bad taste in my mouth that it was hard for the story to recover. A valiant effort from Gordon-Levitt but one that falls short in the end.