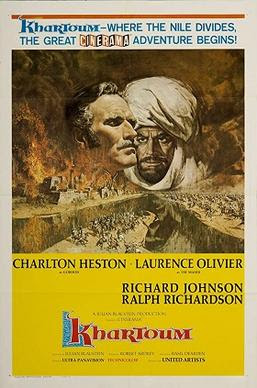 That British Empire, it got around in its heyday. You couldn't go far without stepping on some territory that Great Britain had an interest in. So with so big an empire, things didn't always go well, and in steps film and movies. Today's entry is 1966's Khartoum, an epic story about a little-known part of history (to me at least) with some impressive scale.

In 1883, an English general marches into the Sudan with 10,000 Egyptian troops looking to capture or put down a rebellion of Muslim zealots being led by the Mahdi (Laurence Olivier), believing himself to be the one appointed by Muhammad as a savior. The army is massacred to a man, leaving the British government in a spot.  The Prime Minister, William Gladstone (Ralph Richardson), doesn't want to commit a British army to the Sudan to resolve the situation, but what other measure can be taken? A solution is found in the form of a British military hero, General Charles "Chinese" Gordon (Charlton Heston), the man who helped rid the Sudan of slavery. The plan seems doomed to failure -- the British admitting to him they will only offer military assistance as a last ditch effort -- but Gordon takes the job just the same. What is his reasoning? Can he accomplish a mission with little hope of success? What does the Mahdi have in store? It's all going to be played out on an international stage.

I love a good epic from The Alamo to Spartacus, Ben-Hur to Lawrence of Arabia. This 1966 epic from director Basil Dearden doesn't quite have the huge scale of those other movies, but it is most definitely a gem. It clocks in at a modest 134 minutes (not quite the 3-hour behemoths) but accomplishes a lot in its running time. 'Khartoum' is based on a true story about Britain's quasi-involvement in the Sudan during the 1880s, filming on location in Egypt to give it some authenticity. Most importantly, it has the feel of an epic from the look to the far-reaching story to the music (composer Frank Cordell's score is solid) to the action. It doesn't have quite the reputation or following of so many other historical epics from the 1950s and 1960s, but it is well worth seeking out.

Who better to lead the way in this epic than Mr. Epic himself, Charlton Heston? Here's a case of some excellent casting. This is an underrated performance in a career that featured plenty of memorable roles, his Gordon interesting because there's so much mystery. A military hero, he's religious, loyal, intelligent, stubborn, and so much more. Does he take on this mission because he believes he can accomplish the impossible? Or is it ego, his vanity? Is it more than that? Is it something else? Whatever the answer, this is a layered, deep character who possibly only has one for sure intention...to do good. Gordon himself -- read about him HERE -- was a fascinating person, and Heston more than does him justice. We see all the sides of Gordon, a capable leader, a strong military strategist, and a man brimming with personality. It's easy to see why people believed in him, why people followed him and turned to Gordon when times were tough. An excellent performance from Heston.

The depth of the cast isn't the cast of thousands we've come to expect from an epic, but what's there is excellent. Olivier's part isn't huge -- kinda an extended cameo -- but once you get past the point that the very British actor is playing a very Muslim Arab, it's a good part. His scenes with Heston's Gordon are a high point, two Hollywood legends going toe-to-toe in quiet, underplayed scenes dripping with tension. Richard Johnson is excellent too as Colonel J.D.H. Stewart, the one officer granted to Gordon, working as his aide who sees the writing on the wall with their desperate mission. Richardson leads the government contingent as the wishy-washy prime minister, Michael Hordern, Hugh Williams and Ralph Michael as his government tools. In the military department, Nigel Green plays General Wolseley, the army commander tasked with "rescuing" Gordon, while Peter Arne plays Major Kitchener, the signal corps officer sent somewhat close to Khartoum to aid the defense. Also look for Johnny Sekka as Khaleel, Gordon's house servant, and Alexander Knox as a British official working with Gordon in Khartoum.

Enough with all this acting stuff, let's talk about some epic scale! I liked the story and the characters, feeling like I really learned something from this historic story. What resonated most though in 'Khartoum' was the impressive scale from three extended battle sequences. The opening massacre really sets the tone, the Mahdi's army swarming down hillsides at an exhausted army. Seemingly thousands of extras fill the screen in an amazingly tone-setting sequence. The middle action sequence has Gordon's forces holding off a nighttime ambush of the Mahdi's forces while the final assault on Khartoum packs the screen with Gordon's small forces in the city and the Mahdi's army charging the city in endless waves. Cinematographer Edward Scaife and second unit director Yakima Canutt (a former stunt man, a hugely underrated name in Hollywood stunt/action history) film right there in the dirt and sand with the action. They put the cameras on trucks and speed right into the battle like cavalry charging into its own battle. Great, adrenaline-pumping sequences that belong in the conversation of memorable battle scenes.

I liked a lot about this 1966 epic. It's able to cover a lot of ground, the siege of Khartoum lasting almost a full year. Things never feel rushed as we get to know Gordon, his motivations (sort of), the international situation, the British "solution" to the plan, and the slow-burn Gladstone and Parliament use to hopefully resolve it all. While it's an up and close and personal story, the script from Robert Ardrey does a good job keeping it in an international perspective. All the while, the doom builds right up until the conclusion. I liked it a lot, the expansive look from the opening prologue narrated by Leo Genn to the desert scenes and everything in between. Highly recommended.