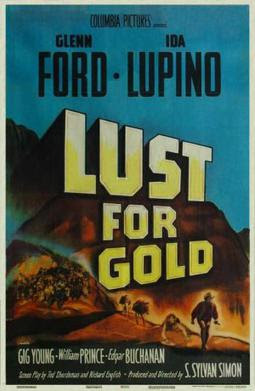 As Gordon Gekko profoundly said, 'Greed is good.' One of the all-time great films dealing with one of the seven deadly sins was released in 1948, Treasure of the Sierra Madre, a frightening look at what gold can do to one's minds. It's one of the all-time classics, making 1949's Lust for Gold an odd choice. Was it an effort to build off its success? Whatever the reason, it doesn't work despite some potential.

It's 1948 in Arizona, a treasure-hunter of sorts, Barry Storm (William Prince), is walking through the Superstition Mountains looking for a supposedly long-lost mine, the Lost Dutchman. He's actually following a famous treasure hunter who states he's got the mystery figured out, but Storm is stunned when he hears a gunshot and soon after finds the treasure hunter dead. He walks to the nearest town, still several days away, to report the murder, quickly realizing this isn't some innocent old treasure hunt. Storm is quickly cleared of suspicion, but his interest makes some curious as he claims to be the grandson of the original owner of the Dutchman mine. As the police waits for a break in the case, Storm sits back and listens to the legendary story of how the mine came to be, including how his grandfather, Jacob Walz (Glenn Ford), came to be involved.

This was an interesting movie, not always for the good. From director S. Sylvan Simon (and an uncredited George Marshall), 'Lust' does have its positives and negatives. It plays at times like a pseudo-documentary, a film noir meets a rough and tumble western. Unfortunately, it never really gels as one coherent film. I liked the framing device in the story, a 90-minute story split about 55 (the Glenn Ford part) and 35 (the 1948 part) divvying things up appropriately. It comes with a message from the state of Arizona -- almost like a Welcome Guide, "Come and see Arizona!" -- stating that the mine is still out there somewhere. It is based off a book by the real Barry Storm, called Thunder Gods Gold, and it plays like a pandering effort to sell some copies of the book. Prince's Storm's narration is a little much too, almost an attempt to sound like a James Cagney-esque gangster. "The gold's out there, I tells ya! Don't believe me, eh?!?"

Oddly enough though, I enjoyed the 1948 portion of the story far more than the 1885 portion. Prince is okay as the intrepidly curious Storm, jobless and interested in finding the lost mine that's supposedly filled with literally tons of gold. The film noir in the desert plays well, dead bodies and potshots piling up over the years as treasure hunters supposedly near the location of the lost mine. In addition to Prince, look for Paul Ford as the local sheriff with Will Geer and an uncredited Jay Silverheels (later Tonto on The Lone Ranger) as his two deputies. The mystery builds nicely and when things wrap up back in 1885, we get some solid resolution. The ending was pretty exciting, wrapping things up that the first 20-25 minutes set up.

Surprising for me was how dull the actual 1880 Arizona western was. It starts off well, greed, murder and betrayal introduced early to the point I thought I had stumbled onto a hidden gem from a genre I love. Well, I didn't. The story detours quickly and is never able to recover. Glenn Ford gets a rare turn as a bad guy -- an out and out bad guy -- but it's wasted because after he finds the gold mine by some rather duplicitous means (read = Murder) the story hamstrings the character as it devolves into a forced love triangle with Ida Lupino's Julia and her husband who she fights with constantly and would like to divorce, played to smarmy annoyingness by Gig Young. Wait, she loves her husband, but she doesn't because she loves Jacob but she doesn't love him either. Gag me, the story goes nowhere, turning a potentially really good story about what greed can do to people into a lame, glacially-moving love triangle. A love triangle of sorts. You've gotta be kidding me.

In the flashback portion, also look for Edgar Buchanan as a grizzled old trail hand working with Ford's Jacob and uncredited parts for Arthur Hunnicutt and Antonio Moreno as two rivals who may hold the key to the location of the lost gold mine. Even western veteran John Doucette turns up for a quick appearance in a barber shop talking about how much gold may be out there.

There are parts that worked surprisingly well. The explanation of how the gold came to be in the mine is a gem, an Apache war party descending on a heavily-guarded escort in a surprisingly graphic action scene. The same for the intro to the 1880s flashback, Glenn Ford's Jacob straight up murdering folks. How many movies can you say that about? Glenn Ford is a good guy for goodness sake! The ending in the flashback has some potential too, but by then I was so bored with the Ford-Lupino-Young part of the story I just didn't care. A movie that has its moments, but not enough of them unfortunately.