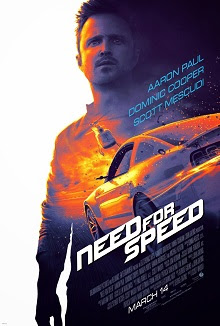 Ah, racing and car movies, my Kryptonite, right up there with westerns and heist movies. Yes, I love them all, from the Fast and the Furious movies to classic films like Bullitt. Need something to tide you over until the next Fast and the Furious movie next year? Okay, funny guy, even if you said 'No' here's a good, old-fashioned popcorn movie for you, 2014's Need for Speed.

A blue collar mechanic who owns a custom car shop (he inherited from his father) he runs with his friends, Tobey Marshall (Aaron Paul) has earned the shop quite a payday on building a Shelby Mustang, a rare muscle car, for a former friend turned rival and highly successful driver, Dino Brewster (Dominic Cooper). In a three-racer race, Dino causes an accident that claims the life of one of Tobey's friends but denies his involvement, sending Tobey instead to jail for a two-year sentence. Serving his sentence, Tobey vows to exact his revenge on Dino the only way he knows how....racing. Tobey seeks entry into the hyped De Leon road race, highly dangerous, highly illegal, driving the Shelby Mustang, but first he's got to get across the country in 48 hours. With a car-knowledgable passenger, Julia (Imogen Poots), along for the ride, Tobey hits the road, Dino doing all he can to slow him up and maybe more.

So a movie with a video game background seems kinda ominous, right? I thought so, and that's as a fan of the Need for Speed video game series. Though there are issues here, its video game background has nothing to do with so any worries are unfounded. Maybe the biggest compliment you can give this movie is that it has a respect for car flicks and the genre movies that came before it. It's little things like showing Steve McQueen's Bullitt on a drive-in screen, shooting on location in San Francisco like Bullitt, including one familiar hotel location for fans of the 1968 movie. From Bullitt, Grand Prix, Vanishing Point, Death Race 2000, Gone in 60 Seconds and The Driver as the classics to more recent racing flicks like Fast and Furious, Drive, Death Proof, 'Speed' knows what audiences full of motorheads and car guys are looking for. Have no worries in that department. A little long at times at 130 minutes, it's still a lot of fun.

This is a movie about the racing. That's all. The in-between portions of the story are okay, sometimes fun, sometimes a tad awkward. Director Scott Waugh knows this is a movie about sexy, exotic, high-speed cars hauling ass down roads, highways and desert roads. Maybe that's why the movie's length is a little long in the tooth, there's simply non-stop racing sequences. We get an opening drag race, the deadly road race soon after, one sequence after another as Tobey and Julia gun it across the country, and the epic finale at the De Leon, six ridiculously cool, high-end cars going toe to toe for the win. What I liked was that these sequences let the cars do the talking for themselves. Composer Nathan Furst's score is good but kept in the background of the action. Let these cars with huge horsepower provide their own soundtrack, much like the iconic sequence in Bullitt. We see the cast doing some driving, the editing isn't too fast or choppy, and things never get tedious with a variety of sequences. Follow the racing formula and things will work out in the end.

Breaking Bad fans can rejoice, Jessie Pinkman himself gets a starring role here, and Aaron Paul doesn't disappoint. The Paul casting in a lead role was interesting because he isn't a prototypical action star and he's far from a bankable movie star. And you know what? Both those reasons end up being major positives. Paul comes in with little baggage so it's cool to see him step up and embrace a leading role. His Tobey is an everyman, a working man and blue collar kind of guy with a freaky ability to get the most out of every car he drives. He goes down familiar anti-hero routes, a man of few words who's loyal, tough as nails and is gonna get the girl at the end of the road. I liked Paul's on-screen presence, able to handle the intense scenes with his low, gravelly voice but also handling the lighter scenes with his friends that provide some comic relief. It seems like the future is bright for Paul in the movie business.

Basically across the board, 'Speed' doesn't boast any star power. Like Paul's casting though, it works as we see some familiar faces if not hugely recognizable names. Poots grew on me, her character showing she's not just a pretty face with a hot British accent. Cooper's part as Dino is horrifically underwritten, Cooper getting by with some evil-looking glares. Michael Keaton overacts like his paycheck depended on it as the Monarch, the mysterious, rich organizer of the De Leon race. Toby's friends and fellow mechanics helping him get across the country include rapper Kid Cudi as Benny, able to fly anything and with a smart-ass comment ready for anything, Finn (Rami Malek), able to identify a car's problems in a snap, Peck (Ramon Rodriguez), the relatively normal guy who has cool facial hair, and Little Pete (Harrison Gilbertson), the ultra-confident youngest member of the group. Also look for Dakota Johnson as Pete's older sister, now dating Dino but who also has some epic sexual tension with Tobey.

There's plenty of questions here. How does Benny continuously acquire planes-helicopters-army transport? What exactly is Dino's deal? If he's a Nascar/Formula 1 driver, why the hell does he join the De Leon? Can a helicopter even hold a souped-up Mustang Shelby that drives off a cliff? Why is Dino so stupid? The movie really isn't interested in spelling too many things out. You'd think the police would commit more effort to tracking Tobey down after all the vehicular shenanigans he pulls, but nah! Oh, fast cars doing tricks! That's the movie. Enjoy it for what it is, one exciting driving sequence on top of another.