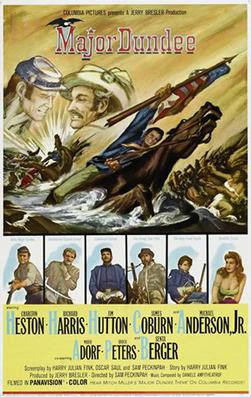 With his 1962 western Ride the High Country, director Sam Peckinpah put himself on the map, springboarding his directing and writing success on TV into feature films. It took him three years to do a follow-up, a western that had countless production issues and was eventually taken away from Peckinpah in the editing phase. It's everything that was good and bad about Peckinpah as a director. It's not a western often remembered as one of his bests, but 1965's Major Dundee is one of my favorites.

It's late in 1864, the Civil War raging back east, but in the New Mexico territory, an Apache war party led by Sierra Charriba (Michael Pate), massacres a troop of U.S. cavalry, kidnapping three boys from a local ranch at the same time. The commander of a nearby Confederate prison camp, Major Amos Dundee (Charlton Heston) decides to go after the Apaches, rescuing the kids and bringing Charriba to justice. Without abandoning the camp though, he must assemble a ragtag group of Confederate prisoners, black infantry, inexperienced officers, cowboys, drunks, bandits and thieves to capture the Apaches. At his right hand is a Confederate officer and friend from the past but now a sworn enemy, Capt. Benjamin Tyreen (Richard Harris). Dundee's company of irregular cavalry hits the trail, following the Apache war party into Mexico, tangling with occupying French forces as well. The Apaches and the French are just two enemies though, the Union and Confederate loyalties among the company threatening to tear Dundee's command apart from the inside.

The production history of this Peckinpah western has quite the checkered past. The production in Mexico went way over budget and way over schedule. Depending on what you read, Peckinpah's original cut for 'Dundee' was anywhere between three and four hours long. When the studio took it away from him, it was cut down to just over two hours. A DVD released in 2005 had a new, never before seen version with almost 15 additional minutes added to the running time. Some additional footage was found that was unable to be reinserted back into the film, but as is, we'll probably never know/see Peckinpah's intended version. So what's the end result with the 136-minute version? A far better western than the 123-minute version that features some good performances, a ridiculously deep cast, some ahead of its time vicious action, and a story that drifts needlessly at times.

What was Peckinpah's goal? He wanted to make an epic western, a new western in the vein of the John Ford cavalry movies. It was supposed to be big and violent full of scope and vision. 'Dundee' doesn't quite live up to that, but in terms of pure entertainment, it's hard to beat. It starts with Charlton Heston in the titular role. Like Peckinpah's best movies, Dundee is the flawed anti-hero like nobody's business. The story almost becomes Moby Dick in the Civil War west. Dundee has been posted to this isolated prison camp because of a command decision he made at Gettysburg (hinted at, never spelled out), and he intends to right that wrong. His plan? Get the kids back, take out Sierra Charriba, become a hero again. The problem? Dundee may not be cut out for command. He's equal parts brilliant strategist with overreaching egoist. His pride and ego get in the way of things, the mission into Mexico becoming an obsession. Quite the performance, one that doesn't always get the notoriety it deserves in Heston's already impressive filmography.

One of Peckinpah's favorite storytelling devices was the anti-hero and his right hand man, sometimes a former friend turned unwilling ally, a device used to its best ability four years later in The Wild Bunch. Here, that relationship is between Heston's Dundee and Richard Harris' Capt. Ben Tyreen. Again, their checkered history (friendship turned bitter rivalry, even hatred) all leads up to this, two men forced to work together. Harris is one of my favorite actors, and this is my favorite performance of many, one of my all-time favorite characters in any film. Harris' Tyreen is everything Dundee wants to be; intelligent, charming, a good leader, and well liked and respected by his men. Tyreen has one great line after another, Harris bringing this character to life, a Irish immigrant turned cashiered American officer to Confederate renegade. The dynamic between Dundee and Tyreen provides some of the movie's best dialogue scenes, the confrontations crackling with energy. Kudos to both actors for developing that chemistry to its fullest.

Brace yourself though. This movie has one sick cast of tough guy actors, many from the Peckinpah stock character Hall of Fame. Jim Hutton provides some laughs as Lt. Graham, a bumbling artillery officer assigned to the cavalry. James Coburn is a scene-stealer as Samuel Potts, Dundee's one-armed, bearded, quick-witted scout, as is Mario Adorf as the feisty, loyal Sgt. Gomez, Dundee's most capable Union soldier. Michael Anderson Jr. does a fine job too as Trooper Ryan, Dundee's young bugler, providing the narration from his in-mission journal. There's also Brock Peters as Aesop, the leader of the small contingent of black infantry, Slim Pickens as Wiley, the drunken mule-packer, R.G. Armstrong as Reverend Dahlstrom, the shotgun-wielding preacher, and Dub Taylor as Priam, the disheveled horse thief. As for Tyreen's Confederates, there's Ben Johnson as the tough Sgt. Chillum, L.Q. Jones and Warren Oates as Arthur and O.W. Hadley, and John Davis Chandler as Jimmy Lee, the troublemaker. Also look for Karl Swenson as Dundee's second-in-command at the prison camp. Just a ridiculously deep cast full of great characters.

Where the movie struggles some -- but is also damn entertaining in those struggles -- is the final 40 minutes. The story does drift too much from the Apaches to the French to Dundee's lost weekend in Durango and a brief love affair with Senta Berger's Teresa. Trooper Ryan's narration gets choppy, weeks slipping by in a flash. The saving grace is back-to-back action sequences, one a showdown with the Apaches in a box canyon, the other a bloody, violent battle with French lancers in the Rio Grande. This is Peckinpah at his action best, clearly an indicator of where his movies would go, especially with The Wild Bunch. Watch the scene with the French and see how brutal it is, how graphic it could have been if censors allowed it. Characters are unceremoniously killed off (blink and you'll miss it), including one surprising death, but it's just a great action scene leading to a quick ending.

Most Peckinpah fans don't list this as their favorite, maybe not even one of their favorites. I just really like this movie, always have, and the longer version with the additional 15 minutes or so really does help make it better. The musical score from composer Daniele Amfitheatrof takes some heat, especially the Major Dundee theme (listen HERE), but I like it, almost as a guilty pleasure. Filming on location in Mexico, including stops in Durango, a gorgeous waterfall location at El Saltito, and many more, all add to that authentic flavor. You really feel like you're on an odyssey across Mexico, seeing a variety of spots, locations and cities. One of my favorite westerns, a heavily flawed but just a damn entertaining movie in the end. Hard to beat, even if we'll never see that epic 4-hour version Peckinpah intended.