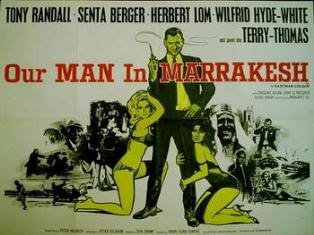 B-movies can be really good when handled right. Now the counter, they can be really, really bad when handled wrong. Whole studios between the 1940s and 1960s were devoted to B-movies, like American International Pictures with its horror, thriller and westerns. How about a spy spoof that has some fun with the James Bond formula, the mistaken identity genre like North by Northwest and a generally fun attitude? That would be 1966's Bang! Bang! You're Dead, released in Europe as Our Man in Marrakesh.

On vacation from his job with an oil company, Andrew Jessel (Tony Randall) is spending his time away from work in northern Africa in Morocco. He boards a bus headed to Marrakesh with five other passengers, not knowing that one of them is carrying two million dollars intended for Mr. Casimir (Herbert Lom), a powerful man with his hand in everything underworld. Where's that money heading? Paid here and there to help fix an upcoming vote at the United Nations. Casimir is trying to find out who, Jessep finding himself mixed up in it all when he finds a dead body in his hotel room closet. One of the other passengers, Kyra Stanovy (Senta Berger), stumbles into the room and sees the dead body, stunned even more when she recognizes who it is. Now, Andrew is very much involved, trapped in a foreign country and trying to hide a corpse. Mr. Casimir is right with him, watching his every step.

I don't hide my feelings about spoofs. I'm usually not a fan. It's the rare spoof I like -- Blazing Saddles, Young Frankenstein, Spinal Tap -- with most of them trying too hard to...well, be a spoof. From director Don Sharp, 'Bang' isn't a literal spoof as I think of a spoof, instead having some fun with a typically pretty serious topic, international intrigue. In the end, I liked it but didn't love it. It's pretty light, fun at times, obnoxious at others, and a decent enough waste of time for 90 minutes or so. The on-location shooting in Marrakesh, Morocco is a definite plus, even if some scenes are undone by some really obvious green-screen shots. Still, Marrakesh in the 1960s sure looked cool, the time capsule effect a big positive.

Leading the way in the Mistaken Identity department is Tony Randall, Mr. Felix Unger himself. Doesn't Randall scream tough guy hero in a spy flick with international intrigue? Yeah, I guess not. He has some fun with the Everyman part, the normal guy thrust into a crazy situation full of conniving crooks, beautiful, mysterious women, wishy-washy motives, lots of enforcers, hit men and car chases, and life and death opportunities around every corner. Randall shows off his impeccable comedic timing throughout, questioning all the craziness that's going on but mostly going along with it. Would you question too much if you got to hang out with Senta Berger? Okay, maybe once a dead body showed up, but I'd still debate it. One of the more unlikely action heroes, Randall throws himself into the mix in the chase and action scenes, his goofiness and lighter tone playing well with the kooky story.

Across the board, the cast is the biggest selling point for this spy spoof. As the sexy sidekick, Berger is just that, pretty sexy. Skimpy and/or tight outfits, sexy Euro accent, how can you lose? Playing the slimy, slick villain, there weren't many better than Herbert Lom, an oiliness to his impeccably smooth and suave Mr. Casimir. Klaus Kinski makes the most of a small(ish) but intimidating part as Jonquil, Casimir's brutally effective enforcer while Margaret Lee sex kittens it up as Casimir's young lady friend/lover who's always asking him to "come lay down with him." Oh, scandalous! As for the other suspects on the bus to Marrakesh, look for Wilfrid Hyde-White as Fairbrother, a Brit working with a septic company (maybeeeeeee) and John Le Mesurier as Lillywhite, another Brith looking to expand his own business. Who is the courier with all that cash? What's everyone up to? There's also some fun parts for Terry-Thomas as El Caid, the son of a former crook trying to go straight...well, sorta, and Gregoire Aslan as Achmed, a truck driver who sides with Andrew and Kyra as things escalate.

My typical issue with movies with a twist, stories with some mystery, is that they try to be too cute in keeping that mystery under wraps. Without going back and rewatching 'Bang,' I'd wager Berger's Kyra tell Randall's Andrew "I'll tell you everything that's going on tomorrow!" Or.....or, just sit down and tell us now. Whatever works. Don't be too cute. Don't leave audiences on the hook for the sake of that cuteness. Thankfully, the last 30-40 minutes pick up the pace once we figure everything out. The finale is pretty fun as everything comes together, one extended chase and action sequence. It's a fun movie, easily digested and onto the next movie!