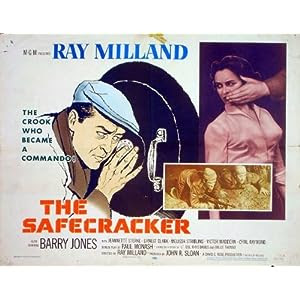 One of England's most prolific character actors, Percy Herbert had a face that any moviegoer would recognize.  With over 100 film and television roles, it would be hard for someone not to at least stumbled across Herbert in a movie.  Now, whether you knew who he was or what his name was, that's a different story. With his steely scowl and Cockney accent, he was always a welcome addition to a movie and never disappointed in his supporting roles.  He made a career of those parts, often in WWII stories where he was the tough drill sergeant, a smart-mouthed soldier, or even just the reliable veteran in the background.  Never a star but always visible, Herbert is one of my favorites.

Like so many of his movies, 1958's The Safecracker doesn't give him much in the way of screen-time, but he makes the most of his limited appearance. That's part of the fun of so many British movies from the 1950s and 1960s.  There were always the established stars out front leading the way, but the rest of the cast was always peppered with these great character actors, instantly recognizable faces and talented individuals who have a knack for bringing a movie up a notch just by being there.  Too often they don't get enough recognition for their talents, but they always brighten up a movie for me, especially here with such a different WWII story that isn't as good as it could have been.  More on the cast later because there's a handful of worthwhile supporting roles.

An honest worker who creates safes while opening safes that banks/businesses/individuals have lost the combination for, Colly Dawson (Ray Milland) is bored with his profession.  He's the best at what he does, but what does he have to show for it?  He takes up with an unscrupulous art dealer, Bennett Carfield (Barry Jones), who puts Colly to work stealing art from otherwise unbreakable safes.  Colly pushes too far though and is thrown in jail in 1939 for a 10-year sentence. But by 1941, Great Britain is up to its neck in WWII and on a dangerous mission the army needs a safecracker to be dropped into Belgium with a commando team. The only candidate with the required skills for the job is Colly who agrees only when told that his sentence will be commuted upon return.  But can this safecracker keep up with the commandos behind enemy lines?

For a movie that I'd never heard of, I was looking forward to seeing this safecracker turned commando WWII story.  But starring and directing, Milland makes two different movies rolled into one 96-minute feature length movie. The first 50 minutes covers his exploits as a locksmith turned master thief while the remaining 45 minutes show his participation on the commando raid into Belgium.  Both segments would have been interesting movies on their own, but here they are too rushed to be any good.  The master thief segment is surprisingly boring maybe because Milland's Colly is too good at what he does.  Up until the job he is arrested on, he's never as much as questioned or spotted during a robbery.  Long scenes with no dialogue and no tension help make an easy decision to fast forward this slow-moving story.

Thankfully, Milland rights the ship in the second half with the training for and execution of the commando raid.  It's a case of too little too late, but is still head and shoulder above the rest of the movie.  Ernest Clark plays Major Adbury, commander of the raid, with Herbert as the tough sergeant with Victor Maddern and a young Bernard Fox as two of the 8-man commando team. The training portion provides some laughs as the older, out of shape Colly struggles to keep up with the younger, fitter commandos as he goes through hikes, runs, and parachute training.  The mission itself is the best part of the movie with Colly's services needed to crack a safe that holds a list of all the German agents working in England.  Performed at night, it's a tense, well-executed scene that helps the movie overcome its painfully slow first half.

A problem I've come across with movies starring Ray Milland is that Ray Milland is in them.  That's not to say he's a bad actor, far from it, he's very good.  It's that no matter the part he is playing, he comes across as a cocky, downright arrogant individual who is hard to put up with at all, much less like him.  Whether it's his upper-class British accent or his general demeanor, you can feel him glaring down his nose at you.  Watching his Colly Dawson go about his job, I actively disliked this character.  For lack of a better description, he's an asshole.  Too old to begin with for the part, he's in it for himself and doesn't care about the consequences as they affect everyone else.  Then there's the ending where his character makes a decision so epically stupid that says everything about his character.  A final scene tries to make him a hero -- and to a point, he is -- but it comes across as a whitewash, covering up something else as it really happened.  Milland is a talented actor, but it's hard to like him or his characters.

Two movies edited into one, Milland the director could have chosen one or the other and made a single movie about a safecracker or a commando.  There was certainly potential here, and it's not an awful movie.  The second half saves it from being unwatchable, but that's still only half a movie.  Just start at the 50-minute mark and imagine an hour-long TV show instead.