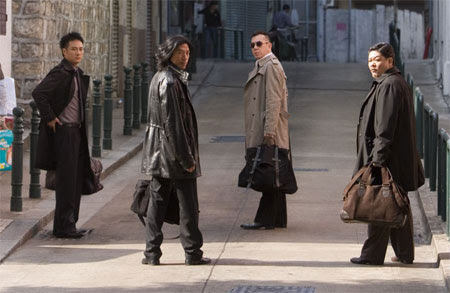 A few weeks ago I reviewed The Mission, a Hong Kong action movie from director Johnnie To. It was a solid action movie that I'd never heard of but ended up loving it.  As I was reviewing it, I saw many of the same names popping up repeatedly in another movie from To with similarly positive reviews.  The movie, 2006's Exiled, was available on Netflix so I gave it a try especially when the description included a mix of spaghetti western and Hong Kong action backgrounds.  Glad I did.

The Mission was the story of five bodyguards working together and gelling as a team only to discover one of the group has committed an act that can only be resolved through his death.  The ending was good but not great and left me wanting a little more closure.  Take it for what this is worth because I've read descriptions of the movie that both agree and disagree, but Exiled is an unofficial sequel to The Mission.  It basically picks up where the 1999 action movie leaves off, a few months later with similar characters but different names.  To has insisted in interviews this movie was not intended as a sequel, and he's probably telling the truth.  But it's just too similar, too close for it not to be. However you interpret it -- sequel or not -- the truth is it's just a really solid movie.

It's 1998 in Macao and China is about to regain control of the island.  Mob wars are starting up everywhere as mobsters and gangsters make plays for power.  Waiting outside a small apartment are four men, all hitmen assigned a mission concerning a former gangster named Wo (Nick Cheung). It's a case of two vs. two as Blaze (Anthony Wong Chau-Sang) and Fat (Suet Lam) have been ordered to kill Wo while Tai (Francis Ng) and Cat (Roy Cheung) are prepared to protect Wo even if it means a shootout. All five men are childhood friends who have gone their separate ways but end up working against each other.  Friendship ends up affecting the mission though as all four men decide to help Wo and his wife Jin (Josie Ho) escape certain death. Their decision has quick consequences though as the mob boss who hired them, Boss Fay (Simon Yam), doesn't appreciate their change of heart and orders them taken out.

Reuniting four of the five main characters from The Mission including another key figure, Exiled certainly feels like a direct sequel.  It certainly helps things get into a flow because if you've seen the first movie, you're already familiar with the characters and their disagreement.  Instead of Shin having a target on his back, we get Wo, a family man with a wife and infant.  The story does have some odd elements and drifts at times more than it probably should.  The idea of combining some spaghetti western background with the typically action-packed Hong Kong crime thrillers doesn't always mix smoothly -- a running gag with shooting an empty pop can is tedious, a flying door spins through a gunfight -- but the positives most definitely outweigh the negatives.

Maybe the biggest difference I noticed here was a bigger budget given to To.  The movie is more polished, more professional looking, most evident during the action scenes.  Stylish with uses of shadow and light, slow motion, blood squibs that look like a fiery mist, the movie's action is truly something to behold.  Roger Ebert complained in his review that thousands of bullets are fired and no one ever gets shot.  Well, I don't know what movie he was watching because the action is everywhere.  The opening apartment shootout is a little more understated than the rest, building up to the bigger set pieces like a restaurant shootout (watch HERE), the fallout at an illegal doctor's apartment (HERE), and the two-part finale that involves a heist of a gold transport and the showdown in the finale at a upper class hotel.  Like few other directors can do, To conjures up comparisons to Sam Peckinpah and The Wild Bunch with his action.  Not a bad comparison.

More than just the action, Exiled is a modern western of sorts, and not just a spaghetti western.  The characters are the modern day equivalents of wild west gunfighters, guns for hire who take on a job as long as it pays.  Then when the chips are down, their true colors come out.  Wong's Blaze is the unwilling leader, Ng's Tai as his temperamental right hand man, Lam and Cheung as the loyal sidekicks, and Wo the root of all their problems.  But just like movie portrayals of gunfighters -- especially The Magnificent Seven and The Wild Bunch -- these men have a code they live by, one that depends on honor, loyalty, and in the end doing what's right no matter the cost.  So here even though it'd be easier to just shoot it out over Wo's fate, the quartet bands together and does what they believe in, even knowing the extreme risks they're all taking.

What can separate a good action movie from a great action movie is the characters.  Just like The Mission, we're given a reason to support these characters even when they are not particularly likable.  We're given little background information, but we don't need much.  Wong is the quiet scene-stealer, Ng the fiery hot-head, and Yam is the nearly psychotic bad guy.  I can't say I liked the movie more than The Mission, but it was close.  Very stylized action -- including a great opening sequence straight out of a Leone western -- and overall a movie that's a lot of fun to watch.