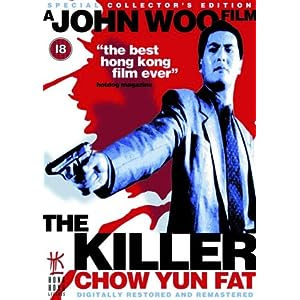 My lone experience with director John Woo has been in his ventures into the U.S., most notably Mission: Impossible 2 and Face/Off.  Neither are classic movies, but I enjoyed both of them.  That's not to say I'm not aware of Woo's other movies, I just never sought them out.  As a fan of just about any sort of action movie, I've stumbled across his name countless times, and finally got around to actually watching one of his non-American movies.  I started at the top with most likely is most well-respected -- critically and among fans -- movie, 1989's The Killer.

Above all else, Woo is known for an ability to assemble an action sequence like few others can. As a fan of director Sam Peckinpah, I thought I had seen my fair share of epic slow-motion violence accompanied by excessive, graphic uses of blood squibs.  Well, that was until I saw this flick.  Some of the best, most interestingly choreographed gunfights I've ever seen dominate the movie.  Woo must have been impacted by Peckinpah's movies -- especially The Wild Bunch -- because not only is the effect felt on the action, but on the story too.  Here though instead of the wild west, it's Hong Kong with hired killers filling in for aging gunfighters.  Dealing with similar themes and topics, The Killer is must-see for action fans, especially anyone familiar with Peckinpah.

After years of working as a hired killer, Ah Jong (Chow Yun Fat) has grown tired with the business as the realization what he's done during his career wears him down. He has unwillingly taken on one more hit, a high-ranking mob official with ties in the government mostly out of guilt.  During a recent hit, a beautiful young singer, Jennie (Sally Yeh) was blinded, and Jong intends to use the money he earns helping her pay for a vision-repairing surgery. The hit is a set-up though by his superiors, and Jong barely survives. He manages to escape though but is now facing problems on all sides.  The mob and a hit squad is closing in, he doesn't have the necessary money for Jennie's surgery, and a persistent but similarly disillusioned cop, Inspector Ying (Danny Lee), is hot on his tail. There's only one way out for Jong, and that's doing what he does best, picking up a gun again.

My first reaction reading the plot of this movie was a little disappointed.  This was a story seen in countless other cop/crook movies like Heat, The Boondock Saints, and any number of Melville crime thrillers from the 1960s and 1970s.  And really, Woo doesn't bring anything new to the table.  The story is solid if unspectacular, but Woo is so clearly comfortable with the setting that it works in spite of the 'been there, done that' feel to it.  It deals with issues that are regularly seen in westerns, men with a code of honor and living, making the right decision regardless of the difficult consequences.  They are brothers in arms who bond through their similar beliefs, principles and actions.  The end result is a costly one often enough, but for these men sacrificing for what they believe is right is worth it when all is said and done.

Besides the action, the biggest similarity The Killer has to The Wild Bunch is the relationship between the two main characters.  Where William Holden and Robert Ryan played the roles originally, Yun Fat and Lee are channeling those two American actors.  Yun Fat is the troubled killer struggling desperately to get away from the life and profession he is so good at.  He has no equal but lives by a code that allows him to continue to kill, hopefully dispatching the bad and not the good.  Lee is the police inspector fed up with the behind the scenes politicking on the force.  In Ah Jong, his Ying sees everything that could be right with such a bizarre profession.  Ying chases and chases, but by the end these two not so different men are fighting alongside the other, not against each other.  The relationship provides some touching moments as the duo faces almost certain death, including an incredibly moving ending.

Just like Peckinpah though, Woo clearly has a fascination with violence and its depiction.  Peckinpah became synonymous with extreme, graphic, slo-mo violence, and Woo follows suit.  A 'ballet of death' indeed. The action through the first hour is solid but nothing too memorable.  The last 30-45 minutes take this movie to another level with two extended shootouts, starting HERE with Jong and Ying battling a small army of hit-men. As good as that firefight is, the scene that has become one of the more iconic shootouts in movie history is the finale in a candle-lit church with slow-motion, blood squibs and symbolic white doves flying through the scene.  Watch it HERE (SPOILERS obviously) and continue it into Part 11.

Some directors just know how to direct action, and this is Woo at his absolute best.  The action is so over the top and ridiculous that it borders on the cartoonish, but because Woo and his cast and crew commit to what's happening on-screen it avoids becoming cliched.  This style of action/violence clearly has impacted just about every action movie released in the 20-plus years since, and it's easy to see why.  Stylish in a way that somehow makes the graphic depictions of violence like a work of art, the church shootout is one of the best action sequences ever.  The ending delivers one cruel twist of fate to a key character (I'm cynical, but it even bothered me in how cruel it is), but the final shot of the movie will almost certainly hit you square in the stomach.  Surprising? No, but it's moving even knowing what's about to happen.  An action classic and a great introduction to the films of John Woo.