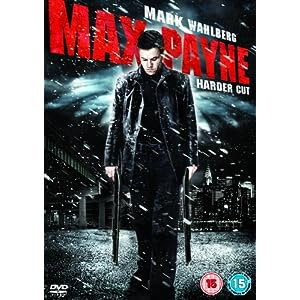 Everything from books to songs to poetry to comic books have been transformed into feature films so why not video games?  Whole series like Mortal Kombat, Lara Croft, House of the Dead have been turned from a video/arcade game into successful (depending on the series) movie franchises.  One of the more popular video game series through the early 2000s was Max Payne, the story of a NYPD cop looking for revenge after the murder of his family.  It's a popular series that didn't translate well to theaters, both critically and in the box office, but here's the counter argument because I liked 2008's Max Payne.

Complaints range all over the place, and nothing is free of scrutiny here when it comes to diehard fans of the original game.  I never played any of the Payne series so I had no preconceived notions about what the movie version should be in terms of casting, characters, and storytelling.  I went in as a fan of star Mark Wahlberg and thought the supporting cast and the premise sounded interesting. Is it a great movie? Not at all.  It doesn't really add anything to an action genre that's seen just about everything.  It feels like a mix of several different movies, everything from The Matrix to Sin City and a ton more in between. So be forewarned, I know little to nothing about Max Payne and still liked it.

It's been several years since NYPD detective Max Payne (Wahlberg) came home to find his wife and baby son killed by three gangsters.  He's been relegated to Cold Case files and is hidden away in the archives of the police department.  At night though, Payne comes to life, walking the streets looking for clues as to the killer of his family and kicking some ass in the process.  Low-level crooks watch out, Max Payne is gunning for you.  His former partner (Donal Logue) stumbles onto a clue that could help Max out, but he's gunned down before he can tell him the actual news. Max is on the hunt now, and he doesn't care much what his badge represents by now.  With some help from a mafia-connected hit woman, Mona (Mila Kunis) also looking for revenge, Max follows the lone clue he has available to him and walks into something bigger than he had planned on.

I'm always surprised when I see a movie that I enjoyed only to read reviews and message boards that spew just posts and posts of hatred for the film version of Max Payne.  It starts with Wahlberg who it seems moviegoers either love or hate.  I like him, and while I can see the criticism that he always plays variations of himself, it doesn't bother me.  His Max is that prototypical man seeking vengeance, and that's a hard character to mess up.  He's got the sympathy vote because who doesn't feel for a guy who saw his wife and infant son murdered? His Max is a man of few words, and at times (like a few other Wahlberg parts I can think of) he reminds me of Steve McQueen in his loner, antisocial anti-hero parts, especially in The Getaway as Doc McCoy.  Wahlberg is a more than capable actor, and he can handle all sorts of action scenes.  Was he the best choice to play Max? I don't know, but from someone with no background in the game or character, the casting worked for me.

In terms of style, visually this movie looks a lot like Sin City.  The whole story takes place almost completely at night so visually we're talking a modern film noir with shadows and darkness, and a little CGI thrown in for good measure and tone-setting.  It's New York City, but it has a feel of a darker, more sinister city, like Gotham before Batman did his thing.  Sometimes the style comes at the expense of the story, but most action movies lean in that direction.  With the story, there are elements of the video game thrown in, and even a little comic book style too.  Nothing is particularly new or innovative, but it's a well-made, good looking action movie and stays well within a comfort zone throughout.

With a movie that in its unrated director's cut clocks in at 103 minutes, there are certain sacrifices made.  The story is disjointed at times with too many elements bouncing around.  In an investigation -- rogue cop or not -- we're going to meet a lot of characters, but there's just too many here.  Kunis continues to show she's capable of being in action movies (check out Book of Eli too), although it's weird hearing Meg Griffin's voice so clearly at times.  She's that perfect female co-star, beautiful and badass, especially late when she's covering Max's back with a machine gun.  The rest of the cast includes rapper Ludacris again proving he's got some work to do in the acting department, Logue in a small part as Max's former partner, Beau Bridges as an old family friend, Chris O'Donnell as a former co-worker of Max's wife, an underused Olga Kurylenko as Kunis' sister, and Amaury Nolasco as Lupino, a super-soldier who can't be stopped.

So if all else, it's a video game movie, and there's plenty of quality action...right? Finally something I think most viewers can agree on.  Criticize just about anything else you want from this flick, but I think the action sequences are pretty untouchable.  Two shootouts stand out, one a running firefight in a crowded office with some nice use of slow-motion, and two, the finale as Max goes gunning for the man who pulls all the strings and was responsible for the death of his wife.  All in all, pleasantly surprised with this one.  I can't speak for anyone else, but it's a solid action flick with a good cast.