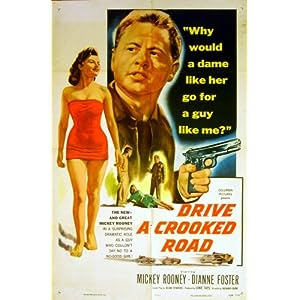 Thanks to a heavy day of programming in late December with movies I'm interested in, I've been on Mickey Rooney overload over the last week or so. That's not a bad thing because as I've pointed out in recent reviews, he's one of my favorite character actors once he grew up into an adult actor.  The latest Rooney flick I reviewed, My Outlaw Brother, wasn't a great showcase for his abilities, but an unknown noir that's slipped through the cracks over the years, 1954's Drive a Crooked Road, certainly does.

There's nothing about Rooney that upon looking at him screams 'I'm a movie star!' He stood only 5'3 and wasn't a classically handsome guy.  For me though, that's part of his appeal.  He was the anti-star who overcame an early career as a child star to become an adult star.  In this age of failed celebrities, how rare does that actually happen?  He was capable of humor (Mad, Mad World), drama, action, and combinations of the three like his parts in Ambush Bay or The Secret Invasion where he got to ham it up with scenery-chewing parts.  Of all the Rooney roles I've seen though, 'Crooked Road' may be the best.

Working as a mechanic in a Los Angeles garage, Eddie Shannon (Rooney) leads a quiet life.  He rents a small apartment and lives alone, sometimes entering road races on the weekend for some extra cash.  Eddie has a scar across his forehead from an incident in his past, one that clearly troubles him as he goes through his lonely life.  One day, he meets the very beautiful Barbara (Dianne Foster) when she brings her car into the garage Eddie works at.  He can't explain it, but for some reason Barbara is interested in him, and they start seeing each other.  It all seems too good to be true, and it is.  After several weeks, Barbara introduces him to two friends of hers, Steve (Kevin McCarthy) and Harold (Jack Kelly) who have a business proposition for him. Steve has planned the perfect robbery, and all he needs is a skilled driver for the getaway. Torn about what to do, Eddie balances out his feelings for Barbara with the knowledge he's going down a road he can't return on.

If you're not familiar with Rooney or any of his roles, or you are familiar with him and didn't think much of him as an actor, check this movie out.  As Foster's Barbara describes Rooney's Eddie, he is a 'lonely, little animal' who is just looking for some sort of happiness.  His facial scar is left unexplained for the most part other than a throwaway line explaining it was 'part of a car accident.' Maybe that line is truthful, but there is something more to it that we never find out about it.  Was someone else in the car with him, someone he cared or loved about very much?  His Eddie Shannon character doesn't have a mean bone in his body, going about his business quietly even as co-workers (including Jerry Paris, Paul Picerni, Harry Landers and Dick Crockett) poke fun at him.

What takes this character to another level is his relationship with the very pretty Barbara, someone he clicks with right away.  You can tell through his interactions that he's somewhat skeptical about the developments.  He's burn hurt in the past somehow and isn't quite ready to open up to someone new, even if he does have strong feelings for her.  The tragic character description comes through when Barbara introduces him to Steve and Harold, and you start to question what her motives were all along.  Was it as a favor to old friend Steve, or at any point were there genuine feelings involved?  Pushed too far and already head over heels, Eddie continues because he genuinely cares for her and thinks this is what she wants him to do. Rooney does a fabulous job bringing this character to life, a vulnerable but kind-hearted man just looking for some sort of normalcy, some sort of happiness. He sees his shot -- however slim -- in getting to that point in a relationship doomed from the start.

Something appealed to me about this movie that I can't quite put my finger on, even now a day after finishing it.  Director Richard Quine doesn't do anything too spectacular here, nothing out of left field, but everything from casting to locations to story is handled professionally and capably.  The movie is shot in black and white giving the Los Angeles locations an old nostalgic feel of a time long since passed.  Foster is the femme fatale, the female character you're just not sure of.  She seems perfect early on, basically the ideal woman even though later we find out everything isn't as it seems.  McCarthy plays the impossibly smooth friend/crook who gets Eddie involved in the heist while Kelly plays his partner and heavy doomed to meet a nasty fate.  The heist itself is nothing special and is more of a vehicle to the end than anything else although Eddie's getaway across a desert road is a highlight.

So what worked so well?  All the little pieces add up nicely, but the selling point here is Mickey Rooney.  With a B-movie, a noir like this, I think it would have been hard for Rooney to get anything in the way of recognition from the Academy Awards, but I feel safe saying he certainly deserved a nomination here.  It's an understated performance that doesn't get caught up in theatrics, and credit to Rooney for that.  Like many heist/robbery movies, the heist is actually the easy part, it's the fallout that causes the problems.  It's there where the movie goes into tragic territory. A great part, a moving, heart-breaking ending, and a movie that has been wrongfully forgotten in the years since.