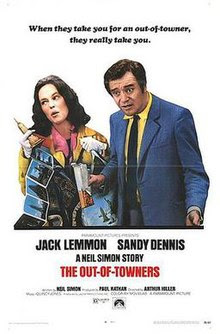 I thought it was appropriate this time of the year with the holidays to throw traveling under the bus.  Once you get to your location, traveling is typically okay, but it's the getting there that's the "fun" part...even more so with the recent news about the intense TSA searches.  And honestly, everyone has their horrible travel stories, myself included.  It's a ritual of growing up almost.  But what about the trip where absolutely NOTHING went the way you planned? I've been lucky and never had a trip quite like that.  But after seeing 1970's The Out-of-Towners, I feel like I experienced the worst trip imaginable.

One of the first things that jumped into my head when watching the movie was the premise that it was a comedy.  A trip where nothing goes right isn't exactly a formula for a hilarious movie.  But with a script by Neil Simon and two stars that more than do justice to the story, they make the most out of a story which in the wrong hands would have produced groans more than laughs. Is it a classic? I don't think so. It gets to be almost surreal in the way the story throws one obstacle after another at this poor couple.  We should all just hope nothing like this ever happens again in real life.

With a huge job interview that could end up getting him a major promotion, family man George Hellerman (Jack Lemmon) is flying from his home in Ohio to New York for an overnight trip with his wife, Gwen (Sandy Dennis). George has everything planned down to the minute including a romantic dinner and dancing and a night at one of the nicest hotels in New York City, all before going to his interview the next morning at 9 a.m.  But almost from the start, George's highly-detailed plans are derailed when the airplane is delayed landing at Kennedy Airport.  Things get worse when the plane is re-routed to Boston because of inclement weather, and as the cherry on top...their luggage is nowhere to be found.  George and Gwen couldn't imagine what other shenanigans await them.

Without giving everything away, here's just some of what awaits this couple on their short trip to NYC.  Start with luggage getting lost, sent to Boston instead of NYC, riding on a crowded train with no food to NYC, starving the whole way because they were looking forward to a classy restaurant, mugged twice, hotel reservation canceled, walking through the city in the rain, unhelpful police, no money, and the most unfriendly, unhelpful people in the history of the world.  At a certain point as a viewer, you just want to roll over and take a nap.  Sure, it's just a movie, but how could any two sane, normal people survive this much being thrown at them?  The laughs come out of their reactions because no one should have to go through even half this stuff.

If you're looking for someone to play a nervous, twitchy, disheveled man, there's nowhere better to start than with Jack Lemmon, one of my all-time favorite actors and not just limited to comedies. Nervous about this upcoming interview and already the owner of an ulcer in his stomach, his Frank Hellerman is basically a ticking time bomb, waiting for that one last thing that will push him over the edge. Of course at a certain point, if he'd just calm down and listen for once maybe some of his problems would be solved, but that would make for a short movie, wouldn't it? As his wife Gwen, Dennis basically the female equivalent of Lemmon here if a little more patient.  She's got all the twitching and awkward shrugs down perfectly, and her 'Oh my God' delivery produced laughs each and every time it was delivered. They're a believable married couple, and that definitely helps.

Now at a certain point, it would just have to become too much to handle, right? Where this Arthur Hiller-directed comedy hits new heights is in the last 30-45 minutes.  After sleeping the night in Central Park, George and Gwen wake up, wondering what they should do.  This is where the movie goes to new heights as the story takes on an almost-surreal feel to it. Both of the Hellermans are near just throwing in the towel and heading for home.  Check out IMDB's Memorable Quotes (and there's a lot of them), and at least half come from a quick 15-20 minute window late in the story. I laughed more in that quick turnaround than the rest of the movie combined, including my favorite, Dennis running to Lemmon shouting 'I found breakfast, honey! A box of Cracker Jack on a bench!' That's just good stuff.

It's kind of a one-track movie so there's not much more to praise or criticize here.  It's a good movie definitely upgraded because of the performances of Jack Lemmon and Sandy Dennis.  Lemmon especially stands out, his ranting and raving on a street corner worth the price of admission on its own.  And just when you think nothing else bad can happen, well, I won't spoil it here.  Just stick around for the ending.  It's well worth, and was repeated years later in an episode of Seinfeld. You can check the whole movie out at Youtube starting with Part 1 of 9.