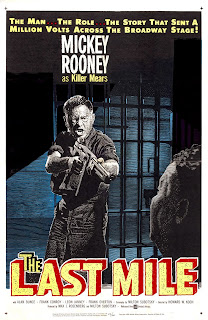 I've always believed one of the best things about movies is that they let you get away from everything, just sit back and enjoy something entertaining for a few hours if you so choose.  They let you step into the shoes of someone else, something else, anything.  You can be an astronaut, a cop, a businessman, a gunfighter, name a profession and there's most likely a movie out there about it.  But what about the movies that aren't specifically made to entertain, but instead deliver a message, an objective of some kind?  That's mostly what I thought about while watching 1959's The Last Mile.

Have you ever wondered it would be like to be a Death Row inmate awaiting your coming death, those last few days, hours and minutes both flying by and dragging at the same time?  I can't say I have, but it's an interesting premise.  People die from any number of things, some by surprise and quickly in car accidents or as innocent bystanders.  Others pass on from medical issues, diseases that ravage your body.  But what about an individual who did something so horrifically wrong that they too are sentenced to die for their actions?  All they can do is wait and wonder...what if?  That's this movie, an unsettling look at life in the death house, the prisoners awaiting their final judgment in the electric chair.

Sentenced to death for a murder he committed, Richard Walters (Clifford David) is assigned to Death Row, the aptly titled 'Death House' where all prisoners awaiting corporal punishment are held. Walters is just two weeks away from his date with the electric chair and has nothing to do but sit back and wait, pondering all the thoughts that race through his head in his final days.  It is during these days that he meets and bonds with his fellow cellmates even though he can't see them, only hear them.  He especially forms a bond with his next-door neighbor, Johnny Mears (Mickey Rooney).  As the date of his execution nears, Walters begins to fear that the stay of execution will not come in time, but in the next cell over, Mears has a plan that could save them all, or get them all killed in the process.

Director Howard Koch makes a wise decision in telling this story that's a remake of a 1932 film and loosely based on a real-life incident in a Southwestern prison. With eight cells in 'the death house,' it would have been incredibly easy to vilify these main characters.  It's safe to assume if you're awaiting your execution, you've done something horrific to get to that point.  But with a movie meant to condemn the unnecessary brutality of the prison system, you just can't delve into the crimes these men have committed if as a director you want the viewer to have any sort of sympathy for these men.  We find out Walters killed a man -- he claims he didn't mean to -- but never the circumstances or situation that prompted the act.  It's a wise choice in story-telling because when the sh*t does hit the fan, you're oddly drawn to these Death Row inmates.

Filmed in black and white with minimal sets -- the eight cells of the death house dominate the movie -- Koch's movie has the distinct feel of a stage play.  The camera rarely ventures into the cells, choosing to stay on the other side of the imposing bars of the cell.  The black and white camerawork keeps everything in the shadows, the prisoners hiding in the darkness of their cells, the guards lurking around just out of sight.  It's an incredibly uncomfortable movie to watch, seeing men waiting for their death, hopeless waiting for some sort of reprieve.  An early segment shows a prisoner (John Vari) in his final hours, finally being pulled from his chair and sent to the electric chair.  We don't see the results first hand, instead only witnessing the overhead lights flickering as the switch is pulled. It's a startling opening and does a great job of setting the mood for what's to come, especially when Walters' death sentence nears.

The opening credits of the movie list only Mickey Rooney as the star, and for good reason.  This is his movie from the beginning.  He plays Johnny Mears, a condemned killer who is typically quiet, subdued and a calming influence on the other prisoners.  Rooney's stature can throw you off.  He's not tall, and you wouldn't normally think of him as an intimidating, imposing person.  But this Mears character, when he blows, he blows in a big way.  Pushed too far, he takes matters into his own hands leading a violent, take no prisoners approach to the standoff.  It's the type of performance that you just can't take your eyes off of.  Rooney steals the movie, including one of the great final lines and shots of a movie I can remember.  The other prisoners include David, Vari, Michael Constantine, George Marcy, John McCurry, Ford Rainey, Johnny Seven, and Sully Michaels.  They're all relative unknowns, and are good enough in their parts without distracting from Rooney.  Also look for Frank Overton as Father O'Connors, the prison priest, and Clifton James, Red Barry, Leon Janney and Clifton James as the most sadistic guards.

So the story builds and builds, and all the while I'm thinking this could be the most depressing movie I've ever seen.  90 minutes of sitting around listening to a group of men talk about their fear of death?  Rooney's Mears leads a prison revolt that gets bloody very quickly with hostages taken.  It's an interesting balance because Mears and his fellow prisoners stand to lose nothing.  What are the guards and warden going to do? Kill them twice? From the warden's perspective, he can't give in to their demands without causing a domino effect in prisons across the country.  The ending keeps things on line with the whole movie's tone and demeanor, staying cynical to the end.  Stick around until the end credits though because that ending is a whopper of a good one.