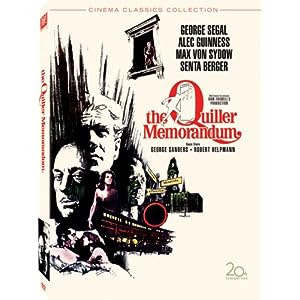 By 1966, the James Bond phenomenon had taken over the world with the huge successes of Dr. No, From Russia With Love, Goldfinger and Thunderball.  Audiences wanted more spy movies, and studios obliged them whenever they could.  A wall of international intrigue movies hit theaters ranging from Bond knockoffs to spoofs like the Matt Helm and Derek Flint series to attempts that took a more serious approach to the spy genre, including 1966's The Quiller Memorandum.

This is the anti James Bond movie, a spy story focusing on the more subtle but still very dangerous life of a espionage agent.  There is no globe-trotting heroics, no ridiculously over the top shootouts and chases, no bedding down of countless women, just a good old-fashioned story of a spy with a dangerous mission that could easily cost him his life.  You know what though? All those things about the Bond series that viewers typically either hate or love...they were fun to watch.  That's missing here.  It's a dull transition to the screen from a novel by Trevor Dudley Smith that lacks anything in the way of excitement or thrills.  I'm all for more realistic spy movies, but at least make them enjoyable to sit through.

Two British agents in post-WWII Berlin have been murdered so a new American agent, Quiller (George Segal), is brought in to pick up the investigation where his predecessors left off. His superior, Pol (Alec Guinness), tells him something else about the mission that could put him in even more danger.  Both murdered agents were investigating the possible reemergence of an extremist Nazi group that wants to again claim power in Germany. If possible, Quiller must infiltrate this Nazi group (headed by Max von Sydow) and find their hideout before any of their plan can take effect. One of the few clues Quiller has though to get close to the group is a schoolteacher, Inge (Senta Berger), who may or may not know more than she's letting on.

There was a lot about this movie that appealed to me.  The setting of post-World War II Berlin is a really unique to tell this hard-boiled story that remains rooted in a believable plot, not a plan to take over the world.  Director Michael Anderson is a visual director, using some great on-location shoots as Segal's Quiller explores Berlin looking for clues.  I've never thought of Berlin as a particularly pretty city, but the locations here are a great scene-setter and background.  It's refreshing also to see a spy movie so heavy on dialogue -- and good, snappy dialogue at that -- instead of relying so heavily on babes and action.  Visually, a great movie to watch and listen to when it's 'on' but not always an exciting movie to watch.

That last part surprised me because with the cast involved and the basic premise, it sounded like a real winner.  A second Nazi party looking to regain power? Now that's a prime villain if there ever was one.  Maybe the movie's best scene are these Nazis including von Sydow interrogating Segal in a great, very unique scene unlike any other interrogation I've seen in a movie.  Watch it HERE. That's the whole movie though, great moments broken up by long periods of nothing.  There is no real plot to begin with, and Segal's Quiller makes some unbelievably stupid decisions for someone who is considered such a top spy.  His character drifts along and stumbles into clues rather than deducing anything for himself.  Add in an oddly out of place and overbearing John Barry score, and the plotline is cartoonish with this blaring music being played over it.

I don't fault Segal for bad acting here because it's the writing, not his acting.  His Quiller is just not a very strong main character.  A very capable spy by reputation, he makes decision after decision that should have ended with him getting a bullet in the head yet somehow he survives time and time again.  I have always liked Segal as an actor, but this wasn't his best part.  His romance with the lovely Senta Berger never goes anywhere and has a forced feeling to it.  They've got a decent chemistry together, but the story gets bogged down in their romantic interludes.  Worst of all, a somewhat coherent twist late in the movie between the two characters is so poorly handled that it misses having any impact.  The movie just ends with no resolution, or not one I was satisfied with.

Now I can't say I was surprised by the positives in this movie, both of them..Guinness and von Sydow.  Guinness' part as Pol is nothing more than three or four scenes that probably total 10-15 minutes on-screen, and he steals every scene he is in, especially an explanation of the trials Quiller will face from both sides.  Underused, sure, but what's there is choice.  Playing a steely-eyed, blonde and blue eye Nazi villain, who is better than von Sydow? His character is pretty one-note with no surprises, but he brings such a feeling of menace and intensity to it you can't help but remember his smallish part. Also watch for George Sanders in a humorous cameo as a higher-up agent in London.