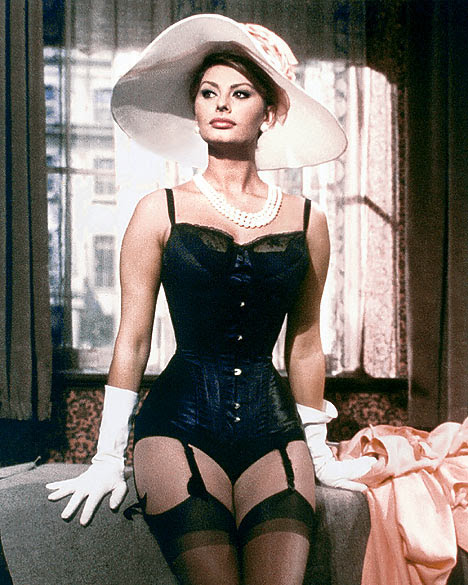 Each and every movie genre has its fair share of predictability, but depending on the viewer it might not be as big a deal.  For me, westerns can be easy to predict where they're going, but part of the fun is how it gets to the end result.  Yeah, the good guy usually wins, but how does he get to that point? What challenges does he face?  The journey getting there can overcome any predictability in the overall story.  How about romantic comedies though? The guy always gets the girl, but it's hard to get wrapped up in a story like that -- for me at least.

Something else has to work for a romantic comedy to be anything but average.  That's why typically I avoid rom-coms unless something secondary jumps out at me.  Interesting leads in the cast always help, and that's why I watched 1960's The Millionairess with Sophia Loren and Peter Sellers in the leads. Loren for all her beauty was an underrated comedic actress, and Sellers is one of the most accomplished comedic actors in movie history.  But the pairing just felt odd to me taking all considerations of talent aside.  Well, my worries were legitimate because even as talented as both actors are, they lack any real chemistry.  It's not entirely their fault because the script is rather lacking, but no chemistry is a deal-killer here in this romantic comedy.

After her extraordinarily rich father dies, Epifania Parerga (Loren) inherits so much money that she becomes the richest woman in the world.  But for all the money, the clothes, the glitz and glamor, Epifania just isn't happy with her life, especially when her choice for a husband ends up cheating on her.  She sets out to find a new husband -- because as comedies tell us, an unmarried woman is a failure at life -- who lives up to her recently passed father's expectations.  She can't find anyone until she meets an Indian doctor, Ahmed el Kabir (Sellers), who she quickly falls for.  The only problem?  Dr. Kabir has no interest in her whatsoever, and no matter what advances she makes, he wants nothing to do with her.

Depending on the quality of the movie and the timeliness, a movie can age well or not at all, and this one feels like a very 1960s comedy.  It's still funny that so many of these comedies were right at home with the premise that a woman might as well roll over and die if she wasn't married by a certain age.  That's Loren's character who has all the money in the world, runs a variety of successful businesses, and basically has the world at her disposal, but because she can't, and I quote "Make a man happy" she thinks her life is being wasted.  Any story that needs that kind of gimmick already has a strike against it before anything else happens.

It never helps then that an actress as beautiful as Loren plays a character so shrill, so downright annoying that you don't care how she ends up.  Her ploy to seducing Sellers is to continuously attempt to kill herself only to have the good doctor rescue her at the last second.  If that's not love, I don't know what is.  Her tactics border on stalkerish, and it's understandable why Seller's Dr. Kabir has no interest in this intensely shallow woman.  What's worse is that because the movie requires it, he eventually gets worn down and falls in love with her too.  Now it is Loren at her most drop-dead gorgeous so instead of a well-written character, we get to see her in various stages of undress that include lingerie, a *gasp* naked back, and all sorts of tight-fitting, very stylish outfits.  So the character's annoying, but she's nice to look at.

A concern I had reading the description was that Sellers -- a very British actor -- was going to play an Indian doctor.  It takes a very talented actor to play a different race, and that's just for starters.  There's nothing like a bad makeup job to make a pasty Sellers look like a middle-aged Indian man.  Well, my concerns were unfounded although at times it did sound like Sellers was doing Apu from The Simpsons.  He underplays his role so well that his Dr. Kabir is one of the more redeeming things about the movie.  His character is likable, and that's key when you hate his counterpart.  I've always liked Sellers as an actor, but he's much better when he isn't hamming it up like the Pink Panther movies. His humor is more subtle here, and the movie is better for it.

Still, as good as Sellers is, that doesn't overcome a lack of chemistry with Loren.  I assumed with two actors as immensely talented as them that an on-screen chemistry would just happen naturally, but it never develops.  I don't think it's their fault so chalk it up to the awful script or the directing or both. The script just doesn't give a lot of chances for anyone to be funny or a chance for the characters to interact in a humorous way. Alastair Sim has a funny part as Loren's lawyer Julius, and Vittorio De Sica is good as a sweatshop owner who meets Loren, but that's about it for the cast. A romantic comedy doesn't have to be hilarious to be good, but it can't be downright dull.  All other things aside, this movie was dull no matter the talent involved.