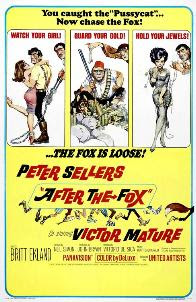 The years following World War II changed the way many countries made movies, and nowhere was that more evident than in war-torn Italy.  A whole genre of films devoted to dealing and discussing how a country moves on following such a world-shattering event emerged called Italian neorealism. If you want a cliff note's version of the genre, they're usually artsy movies that border on the existential with images, stories and characters that force the viewer to make up their own minds and interpret something. There's the part of me that avoids these movies because they sound pretentious and overbearing, all the while knowing there has to be something to these well-received films.

So what does that intro to a review have to do with anything? Well, I didn't actually watch an Italian neorealist film (not yet at least). Instead I watched an Italian comedy that spoofed the genre with star Peter Sellers impersonating a director that sounds suspiciously a lot like famous Italian director Federico Fellini, 1966's After the Fox. This isn't an obvious spoof like Airplane! or The Naked Gun series, but it certainly pokes fun at these art-house movies that are held in such high regard.  Not a hilarious movie, but still a funny one with Sellers dominating the movie like so few can.

Serving a sentence in an Italian mountaintop prison, infamous master thief Aldo Vanucci (Sellers) hears his younger sister, Gina (Britt Ekland), is in trouble and promptly breaks out of prison as easy as snapping his fingers.  When he quickly realizes there's nothing he can do to help his aspiring actress of a sister, Aldo decides to take part in a dangerous job of helping transport 300 gold bars from Egypt into Italy. Every police and detective agency in Europe knows the gold is coming so how can Aldo and his "gang" help get the gold into the country? He develops a plan where he'll pose as an Italian filmmaker filming a movie in a small coastal village about what else? A ship carrying bars of gold landing in Italy after a successful heist of course. The plan seems ludicrous, but could it somehow work?

Growing up watching movies, I was never a huge fan of Peter Sellers.  Aware of him, yes, but I never sought out his movies.  The original Pink Panther didn't hit me right, but I'd like to give it another try at some point.  One criticism I've had of Sellers is that he seems to play the same niche role.  Like Eddie Murphy has done over the last 15 or 20 years, Sellers would play two or three roles in a single movie, and something that I can't explain always bugged me about that.  We get it, you're talented. Now back off.  As I see more of him though, it's easy to see why he's got such a strong fan following.  Regardless of the role, the man is extremely funny.  His deliveries are impeccable, that perfect mix of subtle laughs and more obvious physical, slapstick humor.

Nowhere is that more evident than the second half of After the Fox when Sellers' Aldo unleashes his plan to get the gold into Italy.  He dupes an entire town, a police chief, and even an American actor (Victor Mature poking fun at himself) to star in this "film." The only problem is the timing doesn't work out quite to plan so Aldo -- renaming himself Federico Fabrizi -- has to actually stage scenes to buy himself some time.  So with no script and no real movie at all (with an entire village watching all the time), Aldo improvises and comes up with a neorealistic film about two lost loves (Mature and Ekland) finding each other in this other-worldly depiction of love.  This is Sellers at his best, big and loud, screaming and directing like a nut.  These are the inspired scenes that produce the biggest laughs.

With Sellers posing like a madman as he "directs" his movie all in hopes of actually pulling off this heist, it's Victor Mature as past his prime American actor Tony Powell who steals the movie.  Looking to legitimize his fake film, Sellers somehow convinces Mature's Powell to take part in this innovative new project.  Martin Balsam as Mature's questioning, worrying agent is priceless as well.  So hard up for work and desperately looking to get back into the limelight, Powell goes for it hook, line and sinker. Every request, every command Aldo makes, Powell goes for it, enthusiastically replying 'Beautiful!' before immediately complying.  Mature is playing a variation on himself by this point in his career and nails the part.  It's a bit of a dig without being mean or cruel, but because he commits so forcefully to this wacky movie you can't help but laugh.

All told, I liked this movie but didn't love it.  Director Vittorio De Sica takes his time getting the story where it needs to be so that first hour takes a little while to develop. Sellers helps things along and keeps them moving thankfully.  For the rest of the cast, Ekland doesn't look Italian even with brown hair instead of her usual blonde, but she makes the most of a smaller part.  Akim Tamiroff is the stupidly evil plotter of the gold heist always ready with a double-cross with the beautiful Maria Grazia Buccella as his eye candy. Paolo Stoppa, Tino Buazzelli, and Mac Ronay are very funny as Aldo's inept gang too. A funny movie in the vein of a light-hearted spoof, worthwhile for Sellers and Mature.