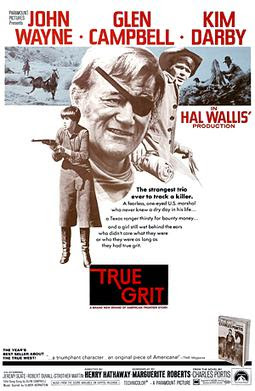 Through a career that spanned four decades by the time 1969 had rolled around, John Wayne had somehow only been nominated for one Oscar in his entire career.  His part in 1949's Sands of Iwo Jima earned him a Best Actor nod which he would lose to Broderick Crawford in All the King's Men.  My complaint isn't that Wayne lost, but he had some excellent parts during his career that included The Searchers, The Quiet Man, Red River, and She Wore a Yellow Ribbon among others.  Well, in 1969 Wayne won his first and only Oscar for his performance in True Grit, an award that obviously came about because of that movie but was almost a symbolic Lifetime achievement award.

Recently this flick has been in the news because the Coen brothers remade it with their movie hitting theaters in the last few weeks.  My worry was that it was a movie that didn't need to be remade so why touch it?  Honestly, the 1969 version isn't a great western, but it is remembered so fondly because of what it meant for John Wayne, his career and his fans.  It's a pretty standard oater and a good example of the type of movies Wayne made at this later point in his career.  Familiar story, good vs. bad, lots of recognizable faces, and nothing really groundbreaking.  But in the end, it's entertaining and a pleasant enough way to pass a couple of hours.

For those not familiar with the story, here's a basic description. The 1969 and 2010 versions are pretty identical story-wise, but here goes. Teenager Mattie Ross (Kim Darby) travels to Fort Smith, Arkansas in 1880 looking for help in tracking down the man, Tom Chaney (Jeff Corey), who gunned down her father in cold blood. She finds no takers other than U.S. Marshal Rooster Cogburn (Wayne), a one-eyed, drunk who is a few years past his prime.  With a Texas Ranger, La Beouf (country singer Glen Campbell), Mattie and Rooster head into the Indian territory to hunt down Chaney and bring him back, hearing rumors he has joined up with outlaw Lucky Ned Pepper (Robert Duvall) and his gang.

Call it his best performance if you want (I don't think it's even close, he had much better) but this may be the one Wayne is most remembered for.  Criticisms aside, and I don't have many, but he had better parts that showed off his ability, Wayne does deliver a great performance and one that he fully deserved his Oscar for.  To a certain point, he is playing a caricature of himself.  He later joked that if he knew all it would take to win an Oscar was put on an eye patch he would have done it years before.  Wayne was an underrated comedic actor, and his Rueben 'Rooster' J. Cogburn shows that off.  He's rough and ready but has a softer side to when it comes to Mattie who can both drive him nuts and have him develop a fatherly bond with her at the same time.  Watch his Oscar acceptance speech HERE for a simple, effective and very moving look at Wayne and this part which finally earned him some Academy Award consideration.

So Wayne is obviously the biggest selling point here, but the problem is what else is there to sell?  As good as Wayne is as Rooster, his two main supporting parts are about as awful as they can be. The Mattie character is key, and as was the case with the remake, annoying but endearing in an odd way.  You're supposed to root for in spite of how ridiculously annoying, how brutally honest she is.  Darby just can't manage it in one of the most grating performances I've ever come across.  You just can't get behind this character.  A similar problem exists for Campbell as Texas Ranger La Beouf.  First, this country singer can't act a lick.  His character is supposed to be the polar opposite of Rooster, but just like Darby's Mattie it's hard to find a reason to like him.  If nothing else, his character redeems himself in the end...twice actually.  Still, it's not enough to save the part.  Check out the remake for how these characters should and could have been played.

Having watched both versions in little less than a week, I had to laugh at the idea that the Coen brothers did something vastly different with their version. Working off the Charles Portis novel, whole scenes, whole exchanges of dialogue are exactly the same between the two movies.  The tone is obviously different -- more light-hearted here -- and the only huge difference is the period authentic dress, dialogue, and accuracy in general.  Director Henry Hathaway films this story in Mexico, California and Colorado and ends up with a beautifully photographed film that looks absolutely nothing like the setting it takes place in, but that's just a minor detail, right? Elmer Bernstein's score sounds like a mix of a lot of his movies, but not necessarily in a bad way.  You'll notice a lot of familiar notes if you're familiar with his work at all, but the main theme is a good one.

You can't help but compare the two, and all I could come up with involving both was that the story itself is lacking something.  Portis was known for straightforward stories that didn't pull punches.  If anything, True Grit is too simplistic, too straightforward.  At times, it's even a little dull.  This is a movie about characters, and for the most part they're interesting even if we don't like them.  Story gets lost in the shuffle at times, but sit back and enjoy getting to know the main characters.  Of the rest of the cast, Duvall makes basically a small cameo, Jeremy Slate and Dennis Hopper are two of his gang, and Strother Martin is a haggling horse trader who incurs Mattie's wrath.