How I Won the War 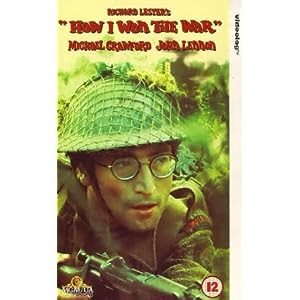 Spoofs are almost a necessary evils of movies being successful in theaters.  Disaster, slashers, ridiculous action, sex comedies, they're all ripe for the picking.  But what about war movies?  There's two ways you can go.  Dark, cynical movies that barely even register as a spoof like Catch-22, basically a blueprint of how to make an anti-war movie.  Then there's the out and out ridiculous look at war, like Hot Shots.  So how about that middle ground in between?  I'll say it's not a good spot to start a movie, and because of the choice to have a story somewhere in between, 1967's How I Won the War is one of the worst movies I've ever seen.

If a director is going to make anti-war movie, more power to you, but pick what kind of anti-war movie you're going to make.  Don't bounce back and forth in tone between jovial and laughing to dark and serious.  Director Richard Lester chooses to bounce back and forth, unfortunately for him and for us as viewers.  There are moments with lots of potential and some great film-making techniques, but they're ruined by the movie's tone that relies on existential, slapstick, and subtle humor all at the same time.  It's the rare movie that I can't find something to recommend, but this was awful.  I physically wanted to hurt someone watching it, but instead watched most of it on fast-forward.  It was a good choice. This movie couldn't have ended soon enough.

Joining the army in 1939 as World War II begins, a young man named Goodbody (Michael Crawford) is deemed officer material and is given the rank of lieutenant.  He's placed in charge of a squad of misfit soldiers who hopefully will never see combat, but of course they do. It's not long before Lt. Goodbody and his men are part of the British forces sent to North Africa to fight the Germans.  But before they can even reach the beaches as part of an invasion force, they're assigned a dangerous but necessary mission.  Three days before the invasion, they will land in North Africa and travel behind enemy lines to build a...wait for it...cricket pitch. Can they get the job done, or will they all get killed in the process?

Just judging this flick as something visual to watch or look at, Lester clearly pulls out all the stops.  His story is non-linear, starting the movie in 1945 as the Allies fight their way across the Rhine River into Germany, then bounces back to 1939 when Goodbody meets his squad and follows their "adventures" in the war.  Then periodically, it jumps back to 1945 to show the lieutenant's interactions with the German officer who captured him. Lester also has all his characters address the camera in first person as if they're talking right to the viewer.  He uses stock footage spliced in with his footage, and then gets artsy with dead soldiers returning as statue-like individuals painted in bright colors tagging along with the survivors as silent partners.

All those filmmaking techniques are fine and dandy though in a war movie, but not one as schizophrenic as this one.  There's all this ridiculous humor followed by moments that are supposed to shock you with its violence.  Don't combine stock footage of dead soldiers with jovial images of a squad of British soldiers literally marching into German machine guns only to have the Germans stand up and surrender.  I know it's a movie, and maybe this wasn't the intention, but it felt very disrespectful to me of those soldiers who did give their lives.  Also, piece of advice, don't compare yourself to other movies.  Soundtrack cues from Bridge on the River Kwai and Lawrence of Arabia were both used at different points.  Used for comic relief? Maybe, but all I could think was that I should be watching those GOOD movies instead of this slop.

My all-time favorite literary character is John Yossarrian, Joseph Heller's main character in Catch-22.  He's a perfect cookie cutter for how to do a lead character in an anti-war flick.  Brash, honest, fully sane (maybe), but just fed up with the situation he's in.  In 'Won the War,' none of that exists with Crawford's Goodbody.  I've rarely come across a main character more shrill, more obnoxious, just out out and annoying than this one.  From an upper class family, he has the mindset that war is fun, even heroic giving men a chance to prove their worth. He is oblivious to everything around him and has no clue that his men despise him. Goodbody continues to preach about the glory and honor of war, but all I could think was that he deserved to be shot by his own men.  In his squad look for Beatle John Lennon in his only non-Beatles role, Roy Kinnear, Lee Montague, and several other random actors that played parts that left little impression on me.

One scene -- yes, that's it -- actually made an impression on me, when Goodbody's squad is killed by a German tank column supported by infantry.  It's shot in a hazy fog and has the look of a dream gone bad. When ripped to pieces by German mortars, Lennon looks at the camera and confusedly states 'You knew this would happen.' Kinnear tries to talk to his German captor only to be bayoneted in the stomach. It's just a small snippet that shows Lester could have made a powerful anti-war movie. As a viewer, I felt nothing for these characters, but because it is shot so well in such a dark fashion, their deaths hit me like a punch to the gut. Watch it HERE starting at about the 4-minute mark and continuing into Part 11.

Writing about that one scene, I can't completely rip this movie.  That one scene is actually that good. I can't say it's the worst movie I've ever seen, but it's up there.  I wish Lester would have picked one route and gone with it.  It is nearly impossible to deliver an anti-war message with a tone and humor as broad as the one here.  War is insane, no one can disagree with that, but by making the soldiers lunatics, cowards, straight up idiots, you're ignoring and disrespecting the people who actually fought and weren't all those things.  How I Won the War is one of the strangest movies I've ever seen, and while I can't recommend it as a movie, it's something you just have to decide for yourself how good or bad it is.  Give it a try at Youtube.