The Sins of Rachel Cade 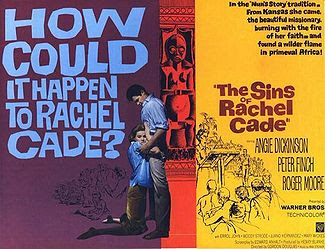 Where many actresses get lost in the shuffle of male-dominated ensemble casts, Angie Dickinson seemed to revel in it.  Movies like Rio Bravo, Ocean's 11, Death Hunt, and many more were all examples of male-heavy casts with a female character that in the wrong hands could have been thrown by the wayside. But even looking like a typical cute blonde who probably weighed 90 or so pounds, she always handled herself well.  Given a rare chance to star in her own movie, she delivers a strong performance in an otherwise average movie, 1961's The Sins of Rachel Cade.

In the Belgian Congo in 1939, American missionary and nurse Rachel Cade (Dickinson) arrives at a somewhat isolated mission only to have the doctor in charge drop dead from a heart attack.  Forced to take over the not so friendly mission, Rachel does her best to offer medical treatment to the African villagers while also trying to teach them the ways of God, Jesus and the Bible from a Christian perspective.  Nothing goes smoothly, but it gets more interesting when two different men, local commander Henri Derode (Peter Finch) and a suave doctor (Roger Moore) begin to show interest in the pretty young nurse, forcing her to decide if she can live by the lessons and teachings she gives to the local villagers.

After seeing Dickinson in mostly supporting roles or at least parts that usually relegated her to love interests, it was cool to see actually see her in a starring role.  Her Rachel Cade is an interesting character, starting off as innocent, somewhat naive, and in some ways condescending to others' beliefs.  I realize as a missionary that is her job, her mission, but she dismisses the beliefs of the villagers who have had those beliefs their whole lives.  Still, even as she struggles with some inner demons and hypocritical feelings, it is a fascinating character to watch.  Dickinson never gets too high or too low so Rachel is a little too laid back at times, but because we see her develop over several years, that's the character.  Relatively calm even when everything around her seems to be falling apart.

Finch and Moore provide some interesting counters, and not just in who they play.  Both Englishmen, Finch plays a French officer (thankfully not trying an accent) and a very young-looking Moore plays an American doctor from Boston (still sounding like a Brit).  Rachel feels something for both men and ends up getting involved in a very serious way with one -- no SPOILERS today, folks -- that makes her question the morality of what's she doing.  Of the two, Finch delivers the better performance, Moore playing his typically suave, ultra-charming character he perfected years later with the James Bond movies.  Other good parts include Errol John as Kulu, Rachel's assistant open to embracing a Christian God, Frederick O'Neal as the local chief curious to Rachel's motivations and actions, and Rafer Johnson and Charles Wood as two of Rachel's helpers in the makeshift hospital.

Dealing with conversations about personal religious beliefs and what religion works and doesn't work, I struggled at times with how preachy the story could be.  I haven't read the novel the movie was based on so I don't know what director Gordon Douglas was working with, but it is a very one-track story.  Christianity good, African beliefs bad, no middle ground.  Juano Hernandez plays a local medicine man/chief who may or may not believe in what he preaches, and Woody Strode plays an imposing medicine man who looks more like a witch doctor than anything else. The portrayal -- however true it is, I don't know -- seems very stereotypical to me and full of political incorrectness.  Because of that portrayal, it seems obvious that of course Rachel is going to have success with converts to Christianity.

Simply in the moviemaking process, I struggled to get into this movie.  It was filmed on an indoor set for this African village/mission Rachel comes to work at.  Filming in Africa would have been no doubt rather expensive, but find somewhere outdoors that could have even slightly resembled the African jungle.  You're very aware you're watching a movie that was filmed on a studio set and not anywhere on location.  Composer Max Steiner's score is all right but doesn't leave much of a lasting impression. I had a hard time really getting into this story, and I don't know why.

The story lacks a certain amount of energy as it finds a rhythm among Rachel's mission, her personal feelings, and all the conflicts going around in the village.  When issues do come up with Rachel finally caving in to some of her wants and desires, it is handled in such a PG fashion that it lacks any punch.  Were we supposed to be shocked when Rachel reveals she is pregnant?  Douglas probably couldn't get away with much by 1961 standards, but watching the movie some 50 years later, it is very noticeable.  The whole movie is fairly dated, but some good acting brings it up a notch and at least makes the movie watchable.