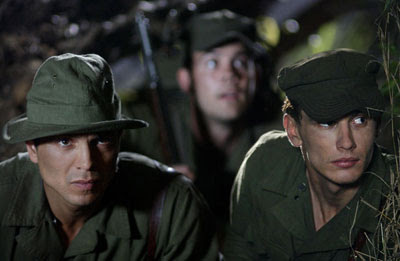 If there was anything that could make war more terrifying, more horrific, it would have to come from the closing days in that war.  The victorious armies march forward to victory while the losing side does whatever they can to slow down that march.  Often enough, the losing armies have nothing to lose and begin to commit atrocities against prisoners of war and civilian populations, or in some cases, trying to cover up those atrocities and war crimes.  Based on a true story, 2005's The Great Raid explores this concept of a war long since lost but both sides must fight on.

Released in late summer 2005 with absolutely no fanfare or advertising, this WWII story not surprisingly bombed in theaters, making barely $10 million dollars.  The movie had already sat on a shelf for over a year because the studio had no idea what to do with it in terms of marketing and ads.  I was one of the few lucky ones to see it in theaters, and with all the crap and below average movies in theaters, it was good to see a well-made, exciting movie that felt like a throwback to war movies of the 1940s and 1950s.  No huge stars, no groundbreaking story, just an enjoyable finished product that is well worth catching up with.

In January 1945, Allied forces led by Douglas MacArthur have landed in the Philippines and are advancing quickly.  Reports start to filter in that several Japanese P.O.W. camps still remain with Allied prisoners, many of them survivors of the Bataan death march.  With concerns the Japanese captors will execute the prisoners (including highest ranking officer Joseph Fiennes), a rescue effort is mounted. A Ranger company of 120 men commanded by Lt. Colonel Henry Mucci (Benjamin Bratt) and Capt. Robert Prince (James Franco) will march 30 miles through Japanese territory and rescue 500 prisoners at Cabanatuan prison before they can be executed. Meanwhile in Manila, an American nurse (Connie Nielsen) does her best working with the underground to supply the POWs with medical and food supplies.

After reviewing a couple of Errol Flynn WWII movies the last few days, you'd think I'd be up for a change in watching some movies.  But even though 'Raid' was released some 60-plus years later, the tone is not that much different.  Director John Dahl made an unapologetically patriotic story about the heroism of American Rangers, American POWs, and the resistance effort during WWII in the Philippines.  None of this is a bad thing in the least because it is still realistic without being sappy, exciting without any pandering, and in the end, just a good movie.  It is the type of story that sounds perfectly written for a movie, only then you find out it is based on a true story, and to his credit Dahl keeps most of the facts straight.

My one complaint is that there's too much going on with the three different storylines, all of them interweaving at different points.  The problem is that all three plot lines could easily have been their own movie.  Instead, we get a 132-minute movie with all three working together.  Because everything moves along so much, the pacing is never slow and is always on the move, but at times I wished it would slow down.  Not surprisingly, I got the most enjoyment out of the Ranger patrol portions of the story, followed by the predicament of the American prisoners of war and then Nielsen's Margaret Utinsky character. That's not to say I disliked any of the segments, I just liked some more than others.

Not having a cast full of huge stars might have been the wisest choice here.  Instead of seeing the big name stars, it feels like the actors involved are actually playing their characters instead of thinking 'Hey, look, George Clooney in a war movie."  Bratt and Franco are paired nicely as the two Ranger officers leading this dangerous mission, Franco especially standing out as the tactically minded Capt. Prince.  None of the soldiers especially stand out, but Filipino actor Cesar Montano is a scene-stealer as Capt. Pajota, a leader of Filipino guerrilla fighters. Fiennes and Nielsen have a fabricated love sub-plot (Fiennes's character is fictional) and make the most of underwritten parts.  Marton Csokas and Logan Marshall-Green represent themselves well as two POWs.

The high point of 'Raid' is the actual assault on the Cabanatuan prison camp in the movie's finale, an almost 35 minutes long segment.  The Rangers must crawl across an open field where they could be easily detected to even be in range of the camp, and then have to ambush the Japanese guards and rescue the prisoners.  In a beautifully shot night scene, the raid is chaotic and loud but never confusing.  Just minutes before, Franco's Captain Prince has laid out exactly how the attack is going to go.  When the attack comes, it goes down exactly as we've been told.  It's an excellent end to a story about courage, heroism and bravery for a mission that served no real strategic purpose, but it was for a lot more.