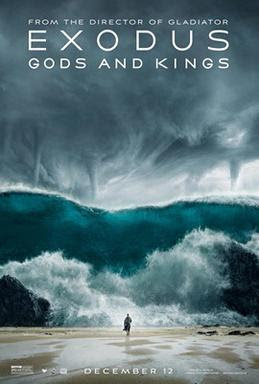 Like the western, the historical epic has seemingly gone the way of the dodo bird. The genre was at its most popular in the 1950s and 1960s, turning out gigantic epics like The Ten Commandments, Ben-Hur, El Cid, Spartacus, The Greatest Story Ever Told, and that's just some of the biblical epics. About a year ago, I was naturally curious when I read that director Ridley Scott was at the helm of a new epic about Moses and the Hebrews' escape from Egypt. Reviews were mixed to negative, but it managed to make decent money in theaters. So where does 2014's Exodus: Gods and Kings fall? Let's see.

In ancient Egypt, a new pharaoh, Ramses II (Joel Edgerton), has been appointed after his father dies. The fiery new pharaoh has help at his side in the form of his stepbrother, Moses (Christian Bale). Many years before, an orphaned infant Moses was picked up in the Nile River and taken into the home and temple of the then pharaoh, Ramses' father. The Hebrew man grew up somewhat knowing his past, his blood, but he's moved on...until now. Seeing his stepbrother as a potential threat to his throne, Ramses exiles his brother. Moses survives though, starts a family in a far-off, isolated village and moves on. Years pass though and he continues to hear the plight of the Hebrew people working as slaves under Egyptian rule, still the cruel Ramses. There has long been rumors and teachings that someone will save the Hebrews, and that man may just be Moses himself. Can he realize it? Can he go back to Egypt and convince his brother to peacefully let the slaves go?

So basically everyone knows the story of Moses, of the Hebrew slaves in Egypt, the plagues one after another, the parting of the Red Sea and the eventual 40 years of wandering in the desert. I read about it a ton as a kid growing up, at home and in school, and then I saw the 1956 epic The Ten Commandments, still shown on ABC every Easter. That's both a good and bad thing for Scott's epic. It's familiar...but it's familiar. I liked it but didn't love it. There's the necessary spectacle and scale you need in a biblical/historical epic and a solid cast, but there are equal part flaws and misses that handicap the movie's potential.

There seems to be a trend going on in history books, on history documentaries, miniseries, all of the above. I think it's a good trend, one I've enjoyed watching as it develops. It's pretty simple. Look at history with a questioning eye. Did the Exodus story happen just as the Old Testament said it did? No, probably not, and that's where Scott steps in. In the movie's strongest moments, he's able to blend that Old Testament story with a fresh eye, a clean look at the story. In a different sense (and a necessary one), he tries to distance himself from The Ten Commandments, many viewers most familiar connection to the story. What was Moses like? What was Ramses like? What was the world they lived in throughout ancient Egypt? It provides a fascinating jumping off point into a dark, dirty, violent and particularly nasty world that we thought we knew.

Christian Bale is one of my favorites. I thought he was the best thing going by far in American Hustle, his Batman movies are great, and if he's in a cast, I'm pretty likely to at least give the movie a chance. In a cast that features quite a cast but not much in the term of characters, Bale is the one to get out unscathed and represent himself quite well. His Moses is a three-dimensional person, a man struggling with what may be his destiny, his fate, the thing he's supposed to do with his life. Is it going to be easy? Not in the least, and that's what he's grappling with. When it comes right down to it, will he make that difficult decision? Bale isn't great, but he's pretty good in a cool leading role. Edgerton too is one of my favorites, a budding star looking for those great roles that will propel him into stardom, but this isn't it. The script does him no favors, an old school, power-hungry villain who comes across as more cliched than a real person. Too bad because Bale and Edgerton's scenes together are a high point. I just wish there was more of them.

The rest of the cast is given little to nothing to do. The names are impressive but any sense of character development was left by the wayside. Look for John Turturro, Sigourney Weaver, Aaron Paul, Maria Valverde, Andrew Tarbet and Ben Kingsley in smaller parts. Two solid smaller parts go to Ben Mendelsohn as a cruel district commander who couldn't care less about the slaves he rules over and young Isaac Andrews as Malak, a child who is God's human representation on Earth, communicating with Moses about what's to come. A scary, intense performance from a talented young actor. I especially liked Bale and Andrews together in their scenes, especially when Paul's Joshua looks on, not seeing Bale talk to anything at all. What he sees is a man seemingly talking to himself in the middle of the desert. Uh-oh, here we go with some faith-based questions again!

Now if the focus isn't on character development, it's gotta be somewhere else, right? You would be correct. 'Exodus' embraces the moment in terms of scale and gigantic qualities you'd come to expect from a historical and Biblical epic. The plaques and plights an angry, violent Old Testament God sends down upon Ramses and Egypt are a sight to behold from the locusts, frogs, blood in the water, to the diseases, and most frighteningly, the killing of all the first born sons of Egyptians, these scenes are the movie at its best, strongest and most comfortable. But by far, the most exhilarating scene is the chase across the Red Sea, Moses and thousands of fleeing Hebrews pursued by Ramses and his chariot army as the receding sea charges back at them, the waves growing ever-higher. An incredible sequence, one of those great uses of computer-generated imagery. So in epic terms, this movie is a huge success and well worth seeking out.

I just wish there was more heart somewhere mixed in with the scale and spectacle. It's a pretty decent movie with some great moments. Still worth recommending -- especially to fans of biblical and historical epics -- but it's good. It could have been much more.