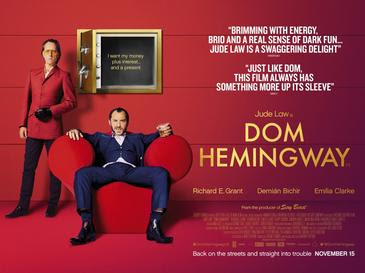 I don't know if you can peg it down definitely to one film or one year. But somewhere around 2000, Jude Law seemed poise to become the next big thing. An incredibly talented actor, he was also a fan favorite for the ladies and more than capable of handling an action movie or heavy drama. Then...it never quite happened. He's got a long list of really good movies to his name, but it's been interesting watching his career over the last 10 years or so. Today's entry? A dark, truly fun performance from Law in 2013's Dom Hemingway.

It's been a long, slow 12 years, but Dom Hemingway (Law) has put his time in. Sentenced to a lengthy jail sentence after being caught red-handed during a robbery, Dom opted to not rat out his employer and paid the price. His time is up though, and he's finally free. Dom meets up with his friend and former partner, Dickie (Richard E. Grant), as soon as he gets out and proceeds to Live It Up for several days, more than making up for lost time. Now though, it's time to get down to business. Dom is supposed to meet that employer he never ratted out, Mr. Fontaine (Demian Bichir), a menacing, powerful crime boss who could wipe out a rival with the snap of a finger. Dom has an idea of what to expect from their meeting, hopefully receiving a sizable reward for keeping his mouth shut. Ever the live-wire though, Dom catching up with the spirits blows up in spectacular fashion when he meets Fontaine. Well, things just got interesting. Has this low-level safecracker pushed his luck too far?

Yowza. What a movie. There's something to be said for British crime movies, especially those like 'Hemingway' that just throw caution to the wind and go for it. From director and screenwriter Richard Shepard, this is an extremely dark, truly funny, vulgar, vicious crime flick. I loved it. It is highly stylized and clearly influenced by both Guy Ritchie and Quentin Tarantino, both in terms of that style but also the dialogue and the violence (mostly kept off-screen). Title cards introduce new chapters almost like we're reading a book. Everyone (and I mean EVERYONE) is particularly nasty in this crime-riddled world where all our players typically look out for No. 1 above all else. Now all that said, this is pretty vulgar basically from the get-go so it most definitely is NOT for everyone. If you're looking for a good test, here it is. The opening scene has a woman performing a sexual act on Dom as he talks up a freaking, filthy storm. It goes on for at least a couple minutes.

Easily offended? Probably not for you.

And there's that Jude Law fella. I saw a trailer for this crime drama/comedy at least a year ago and was curious immediately. Reviews were almost uniformly mixed, but they all seemingly loved what Mr. Law did with the titular character. They were right. Law makes this movie. He just goes for it from the opening scene and things are off and running. His energy can only be described as manic mixed with rage, fury, frustration and fear. If you combine those things, how can't it be entertaining?!? He's not the most likable individual, but my goodness, is Law's Dom Hemingway endlessly fascinating. You see the ups -- getting out of prison, reuniting with Dickie -- and the bad that's usually self-inflicted as he puts his foot in his mouth over and over again.

Kudos to Jude Law for playing this part. It isn't a pretty boy performance or even remotely glamorous. He reportedly gained 20-plus pounds to play Dom Hemingway, doesn't hide his receding hairline, and favors an amazing beard that blends well with his suit that's...well, 12 years old. There is a dark, dirty and funny style to this safecracker trying to prove he's not past his prime. I loved the dynamic he has with Grant's Dickie, two friends and partners who bitch and moan at each other like brothers. Differences and heated arguments aside, they are friends, however twisted. Their dialogue crackles, and their scenes together just flow so effortlessly. It is in those moments that the movie is at its fast-moving, stylish best.

This is Law's movie, and the cast doesn't feature a ton of huge names but there are some solid parts just the same. As I mentioned, I especially liked Grant as Dickie, Dom's longtime partner and friend. Bichir doesn't have a huge part, but his scenes are certainly memorable, a seductively intimidating crime boss who could kill with a snap of his finger. Madalina Diana Ghenea is his girlfriend, accustomed to the finer things in life. Emilia Clarke (of Game of Thrones fame) plays Dom's estranged daughter, now married and with a son while Kerry Condon plays Melody, a prostitute Dom keeps crossing paths with. And last but not least, Jumayn Hunter as Lestor, the son of Dom's old nemesis, potentially holding a job offer but who might -- just might -- still be holding a grudge for a past transgression.

I wasn't always sure where this film was going. When the storyline featuring Dom's estranged daughter was brought up, I was worried things might get a little sappy, too familiar. It doesn't. Like so much else here, it all blends together pretty seamlessly. It does know where it's going, and often times via impeccable timing and some lucky coincidences. Here's the thing though. Yeah, this is dark and dirty and downright filthy at times, but I can't remember the last time I laughed this much at a movie. True, real, out-loud laughs. A highly recommended flick, especially for those fans who love dark British humor mixed with the almost always reliable British crime angle. Well worth a watch.