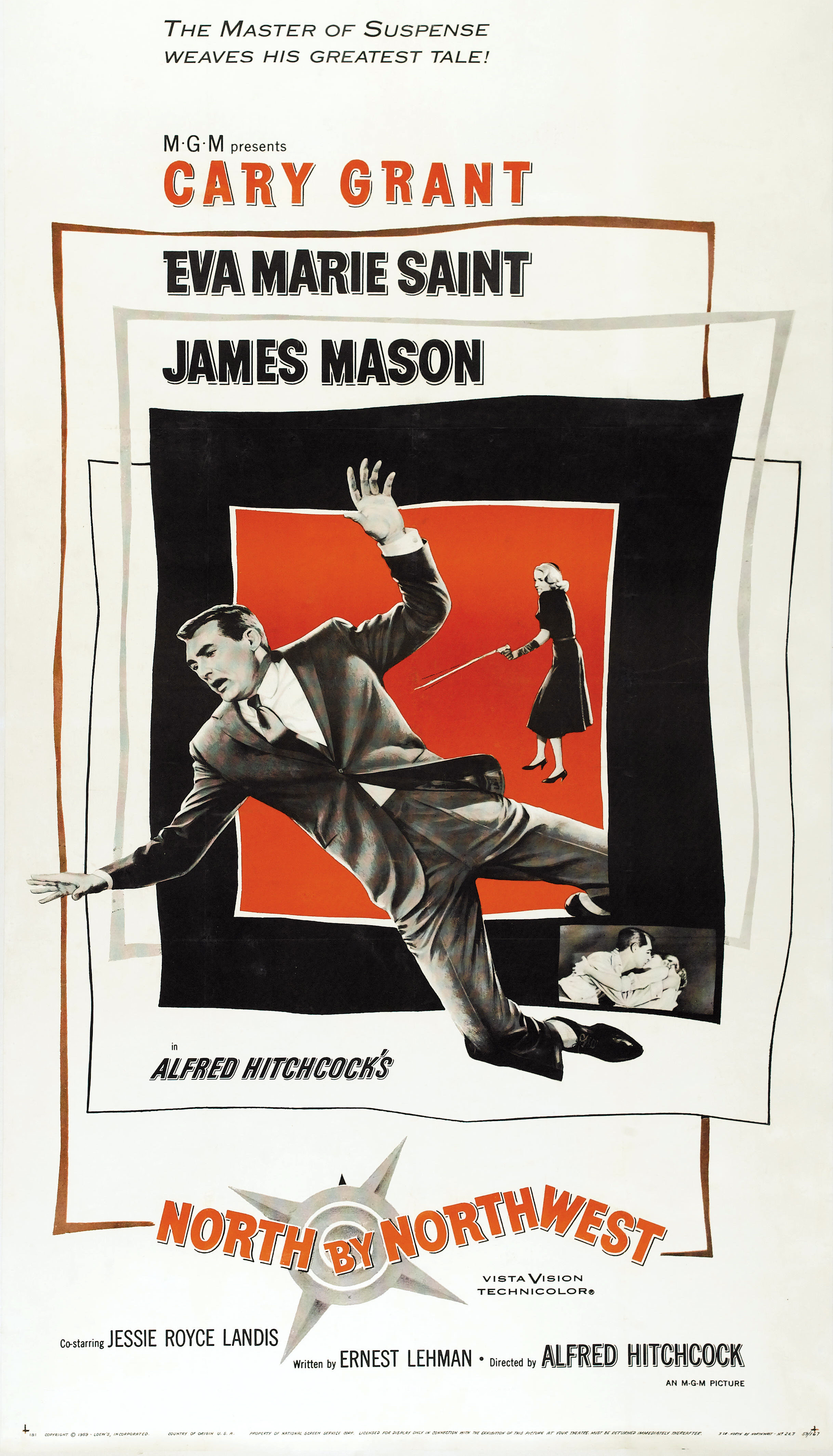 Name a great director. A truly great one. Someone like Stanley Kubrick, John Ford, Billy Wilder, Orson Welles, and for today's review, Alfred Hitchcock. Ask any fan what their favorite movie is from their favorite actor, and you'll no doubt get some great answers; some agreed upon on and others surprising. For Mr. Hitchcock though, the Master of Suspense himself, that favorite movie is not worth arguing about, and I don't think it's that close either. Here's 1959's North by Northwest, my favorite Hitchcock movie by far and one of the best movies ever.

Working as an ad executive in New York City, Roger Thornhill (Cary Grant) leads quite the bachelor life in Manhattan. Well, he did lead quite the bachelor life. Visiting clients at lunch, Thornhill is taken by gunpoint out of the restaurant and driven to an isolated countryside mansion far from the city. There he meets a mysterious but eerily calm man, Vandamm (James Mason), who begins to ask him questions, questions that Thornhill has absolutely no idea how to answer. What do the questions lead Thornhill to believe? These men believe he's some sort of secret agent, a government official who's trying to stop them from doing...well, something. Vandamm and Co. have had enough though and decide to kill Thornhill, but he manages to escape. Now what? No one believes his improbable story. NO ONE. These men won't leave him alone though, and now, Thornhill is being framed for murder. He goes on the run, and the key to his safety may be a similarly mysterious but very beautiful young woman (Eva Marie Saint). Can Thornhill figure it out before his time runs out?

Sometimes, you just tip your cap to someone at the top of their game. That's Alfred Hitchcock here directing this 1959 mystery thriller. With more than a few genuine classics to his name already, Hitchcock hits this one out of the stadium. It's perfect. Smart, funny, frightening, impressive, so many adjectives come to mind. It's that Hitchcock does it all so seamlessly too. One scene, the tension is dripping off the screen. The next Grant and Saint engage some of the more scandalous dialogue to come out of the dialogue. Next up, a ridiculously charged chase scene. The movie clocks in at 136 minutes and covers a ton of ground, impressive when you consider the story basically has no plot, no huge reveals. So as I said, tip your cap. Some movies are untouchable, and this is planted firmly on that list. A master director at his absolute best.

A true test of a director's legacy is that all-important impact he/she makes with their films. One of Hitchcock's many, even countless impressions he's made is a little ditty called the 'macguffin.' It is a plot device that is SO FREAKING IMPORTANT, but never gets explained in the least. Like AT ALL. That's this entire movie. It's a movie about secret agents and the hidden government offices who run them. It's about bad guys who hold diabolical government secrets and must be stopped at all costs. So in that sense, there's literally no plot here. Yeah, Grant's Thornhill must stop Mason's Vandamm but...whatever. This is an epic case of mistaken identity that snowballs into something far more sinister, dangerous and potentially deadly. It takes a brave, talented and gutsy director to pull something like that off. I've always thought the 1950s were Hitchcock's strongest decade, and this is leading the way out front.

I got the sense watching 'Northwest' recently for this review that the Thornhill character was probably written for a younger actor. You know what though? It doesn't matter. Yeah, maybe Cary Grant was a little older than intended for the character, but his charming, likable on-screen persona and his smooth, deadpan delivery is beyond perfect for the part. As this case of mistaken identity unravels, Grant's charming, gentlemanly indignation fits effortlessly into the story. His chemistry with the lovely Eva Marie Saint is one of the best in film history, simple as that. Their dialogue is scandalous even a little bit now, ahead of its time for sure. You watch their scenes together and marvel. Just sit back and enjoy it. Hitchcock reveled in thumbing his nose at Hollywood's so-called rules, and my goodness, he pushes the envelope any time he can. I have to wonder, did the censors and studio just allow it? It's just too good to pass up.

The cast is so disgustingly good everywhere you look. Mason is the perfect foil to Grant, similarly charming, calculating and with a touch of diabolical intent. His henchmen are terrifying without saying more than a few words, Martin Landau and the creepiest eyes ever and Adam Williams as his knife-wielding enforcer. Just eight years older than Cary Grant, Jessie Royce Landis has a ball as Thornhill's worrying mother, the comic straight woman to all these antics, including her classic encounter with Landau and Williams in a packed elevator. There's also a great little part as Leo G. Carroll as the Professor, a mysterious, distinguished man interested in seeing how the proceedings develop. There's too many other familiar faces with small parts that pop up here and there to mention, but I noticed a cool, quick and you'll blink moment with a young Jeremy Slate as an alert policeman in Grant Central Station. A cool, very early part for a Just Hit Play favorite!

I hadn't watched this movie in years straight through, and man, it was fun catching up with this classic film. From Saul Bass' incredible credit sequence -- watch it HERE -- to composer Bernard Herrmann's phenomenal musical score -- give it a listen HERE -- this movie is technically perfect. Hitchcock uses some great visual tricks from matte paintings and green-screen techniques that trick your eye into seeing something you're not and doing it without calling attention to those techniques. Again, Hitchcock puts it all together. Sit back and take it all in.

Talk to fans of the movie, and there's countless scenes that they'll mention as their favorites. There's the climactic chase ON Mount Rushmore (WHAT?!?), the painfully tension-riddled scene at an isolated crossroads with quite a twist in maybe the movie's most iconic scenes, and that's just two I'm willing to mention. If you haven't seen this movie, you are in for a treat. If you have seen it, go back and revisit 'Northwest.' There are few movies that click on all cylinders like Hitchcock's classic film does. From New York City to Chicago to Rapid City, a thrill a minute ride. A true, TRUE classic.