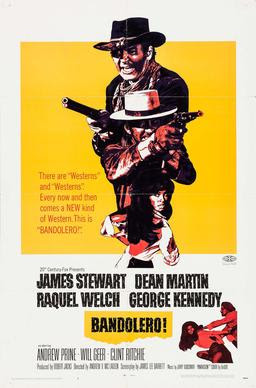 With 1960's The Alamo -- one of my two favorite movies -- producer-director-star John Wayne built an entire set in Bracketville, Texas, that included the famous Alamo mission and nearby San Antonio. It was a set that was used in many, many films in the years following, even becoming quite the tourist attraction, before closing in the last few years. One of the best and one of my favorites? A 1968 western called Bandolero!

It's 1867 in Val Verde, Texas -- a small border town not far from the Rio Grande -- where noted outlaw Dee Bishop (Dean Martin) and his gang is caught trying to rob a bank, killing two people in the process. Sentenced to hang, the entire gang is rescued on the gallows by Mace Bishop (James Stewart), who is posing as the hangman. Dee and his men escape, riding out of town hell bent for leather trying to reach Mexico ahead of a posse led by the stubborn Val Verde sheriff, July Johnson (George Kennedy). On the trail, the Bishop gang takes a hostage, Maria Stoner (Raquel Welch), a widow of one of the men killed in the robbery, and continue on to Mexico with the posse close behind. Embarrassed in his town, July Johnson has another reason to pursue the gang as far as they go. He's long been in love with Maria. All sides cross into Mexico into what Maria calls 'territorio bandolero.' Translation? Bandit country, bandits who will kill any and all gringos they come across.

This isn't a classic western, but for me, it's always been one that is a lot of fun. It's from director Andrew McLaglen, a director who specialized in pretty straightforward, almost always pretty entertaining guy's guys movies like this, The Wild Geese, McClintock, The Devil's Brigade and many others. He's one of my favorites just because of that, he made movies that were fun, that were entertaining. This is one of his better efforts, a western with a great cast, an interesting premise, and some tweaks and twists and turns in a story that tries to blaze its own trail. Again, not a classic, but damn entertaining and one of my little-known movies I consider a personal favorite.

It starts with two of my favorite actors, Jimmy Stewart and Dean Martin, in lead roles. The character premise is familiar but handled nicely. These are two brothers torn apart by the Civil War, Stewart's Mace fighting for the Union while Martin's Dee fought with the South, specifically Quantrill's Raiders. Now, years later they're brought back together by dumb luck, some coincidence and one brother desperately trying to help the others. These are two good actors, and they carry the dramatic moments. It's especially cool to see Martin in a villain role, albeit a likable villain. The middle portion of the movie is carried by their scenes as they reunite, talk things out, plan for the future, all the while trying to mend their differences. So yeah, they're on the wrong side of the law, but...meh, it's Jimmy Stewart and Dean Martin so you kinda go with it.

As for the Bishop gang, look for Will Geer as the crotchety old man, Pop Chaney, his ill-mannered, probably a little off son, Joe (Tom Heaton), Babe Jenkins (Clint Richie), a deadshot with a rifle and a bit of a ladies man, and Robbie O'Hare (Sean McClory), the hard-living, loving-life Scotsman. An interesting, nasty group to round out the gang.

The rest of the cast ranges from interesting to good to good-looking. Kennedy is underused but very solid as Sheriff Johnson, the peace officer trying to do his job but he's got some ulterior motives for his actions. I also have always liked Andrew Prine as Roscoe Bookbinder, Johnson's loyal deputy. Lonesome Dove author Larry McMurtry was apparently a big fan of this movie and used both character names and general descriptions in that novel. As for Raquel Welch, she's trying, really doing up a Mexican accent. It isn't nearly as bad as some reviews make it out to be -- the script doesn't do her any favors -- but it isn't especially good either. Shallow dude time though, she looks as beautiful as ever. Plenty more familiar faces though including Denver Pyle, Rudy Diaz (the bandit leader), Harry Carey Jr., Perry Lopez, and Dub Taylor.

Now for that Alamo Village portion of our programming. McLaglen uses the Alamo set to good use with two extended set pieces, the opening being Val Verde, the robbery and then the eventual escape. The finale is actually on the Alamo mission set, an abandoned town set among the ruins of the bombed out fort. They try to disguise the recognizable chapel face, but you can't miss it if you're paying attention. It's a great use of the locations, Utah and Arizona also serving as some locations. Also, one more thing. I love composer Jerry Goldsmith, but this is one of his favorites, a score I absolutely love. The use of a mouth harp over the opening credits is an odd choice, but does it ever work. The rest of the score is more action-packed western themes, but it's catchy, memorable and a great support to all the action. Give it a listen HERE.

If there's an issue in this McLaglen western, it's that the script has a great opening set piece and a memorable, blood and guts finale. In the middle....yeah, things drag at times. There's a couple campfire scenes, Maria getting to know Dee, Dee reacquainting himself with Mace, and all the while Johnson's posse tangles with a large gang of bandits. Never boring, but never as exciting as the beginning and end. Now that ending/finale? Yikes, it packs a wallop, packs quite a punch and does so while delivering some genuine surprises. Quite an ending to one of my favorites. A perfectly entertaining little western. Nothing more, nothing less.

New comments are not allowed.