The Secret of Santa Vittoria 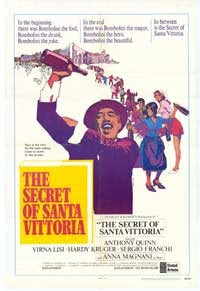 Sometimes you just have to hit me over the head to get your message or an idea across. Today's lesson? Something I've picked up over recent weeks as I've watched Ride, Vaquero!, Guns for San Sebastian, today's review for 1969's The Secret of Santa Vittoria, and hopefully a couple more soon that are sitting on my DVR. I've always liked Anthony Quinn a lot, but my goodness, could this guy act. Today's review is one that's unfortunately been forgotten over the years, a World War II drama with some laughs mixed in. Oh, and a scene-stealing part for Mr. Quinn.

It's the middle of World War II and Italian dictator Benito Mussolini has been deposed, leaving the country up for grabs by occupying German forces fighting the Allied advance. And then there's the mountain town of Santa Vittoria where a man named Italo Bombolini (Quinn) has lived his whole life. A drunk, a bit of a goof, he is well-liked if not well respected by the town. In fact, he's a bit of a punchline. Through a series of misunderstandings, Bombolini is named Mayor of the town. Ever one to embrace the spotlight, the jovial Italo takes the position but news soon reaches the town that German forces will occupy the town soon. What does the town hold dearest? What is it most known for? It's wine, made and bottled locally. Check that. A LOT of wine, 1.3 million bottles. The Germans no doubt want to get their hands on the product. What is Bombolini to do? With the Germans, including commander, Captain Von Prum (Hardy Kruger), fast approaching, the town comes up with a plan...to hide the wine. Can they do it without endangering their lives?

I remember clearly stumbling across this movie back in 2008. It was right in my period of awakening when it came to movies that....my goodness, there's HUNDREDS and THOUSANDS of movies out there I haven't seen. Sure, there are some duds (a lot of them I suppose), but then you come across gems like this. I loved this movie then and still love it now. The weirdest part? It hasn't held much of a reputation in the years since. So what can we take away from that thought? Go track down a copy. Look for it On-Demand. Check iTunes. Look on Turner Classic Movie's schedule. If you're a fan of Anthony Quinn, of war movies, of Italy, of wine, any and all, you'll like this movie. Go find it!

'Secret' comes from director Stanley Kramer who by 1969 had a long list of classic and near-classic films to his name. Personally, I put this WWII drama (with some comedy) at or near the top of that list. Yeah, it's a little broad at times, a little stereotypical, but never anything that cripples the message. This isn't a battlefront movie or a story about the horrors of war. It is about the people, the human beings that become involved in a cat and mouse game with....wine on the line? To these people in Santa Vittoria, that wine is their identity. It's what their town stands for. So when someone is going to come and just take it away, they decide to do something about it. The extended scene where the townspeople actually hide the wine through some ingenious thinking is one of the movie's highlights. I can't put my finger on why this movie doesn't have more of a following. One big reason to like it though is simple. It's different and tries to be different...and succeeds on all levels.

So, yeah, here we sit again. That Anthony Quinn fella, man, he could act. This performance is Quinn at his big, boisterous, loving life, larger than life persona. In another actor's hands, you might accuse him of chewing the scenery, but with Quinn, it never feels forced. His Italo Bombolini character is a scream. He loves life, loves wine, loves his family and friends...but he loves all those things at the cost of, well, a work ethic. Not the town drunk, this is a man who isn't taken very seriously by the town and its people. Thrust into a power position, he takes advantage, especially when news of the German's coming occupation is discovered. Quinn fills the screen with this manic energy no matter what the scene calls for. Pure joy and blind rage, he's able to flip the switch back and forth with ease and without driving the audience away. It's not a part remembered as his best or most memorable, but it's one of my favorites for a ridiculously talented actor.

There isn't a misfire in the entire cast. Not huge names, but some very talented actors and actresses. Anna Magnani is excellent as Rosa, Italo's wife who's grown sick of his antics and kicks him out their house, with Patrizia Valturri as their 16-year old daughter, Angela. Kruger is excellent too as the German commander, avoiding the cliches of the brutal German officer. He's a soldier, not a blood-crazy Nazi...but yeah, he's still got an intimidating edge. Also look for Virna Lisi as Caterina, a beautiful widow who's come back to her hometown, Sergio Franchi as a wounded Italian soldier and deserter who's come back to Santa Vittoria to heal (and hide), Renato Rascel as Babbaluche, Italo's best friend who's always ready with a criticism, and a young Giancarlo Giannini as Fabio, Italo's young friend, a college student and possible suitor for Angela.

Watching this WWII comedy-drama for a second time, I was reminded of some similarities with another classic war film, 1964's The Train. War is horrific in terms of lives loss, but at what point do other things become something worth risking lives? In 'Train,' it was priceless works of art. In 'Vittoria,' it's wine. It is handled in subtle fashion, but the question definitely makes you think. When push comes to shove, with a gun to your head, do you reveal a secret about hidden wine? It's an interesting question, one that definitely forces you to contemplate the lunacy of war.

Just an excellent movie. It was filmed on location in Anticoli Corrado and Capranica, Lazio in Italy. The town setting for Santa Vittoria is stunningly beautiful, as is the Italian countryside surrounding the town on all sides. It adds an additional layer to the film, a feeling of authenticity as if we've been transported to 1940s Italy. A tad slow at times at 140 minutes, the movie is at its strongest in the final hour-plus. The ending especially is highly memorable, Quinn stealing the scene and the show in general. Highly recommended. A forgotten gem.