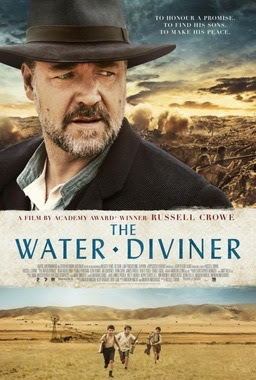 Russell Crowe has been working consistently in films since the 1990s. He's picked up three Oscar nominations for his acting, winning for 2000's Gladiator while earning nominations but not winning for 1999's The Inside and 2001's A Beautiful Mind. Like many actors though, Crowe isn't working just in front of the camera. He just happened to get behind the camera as a director. His directorial debut is getting some solid reviews while also making some decent box office. Here's 2014's The Water Diviner.

It's 1919 and the world is still moving on and recovering from the horrors and losses of World War I. At their remote ranch and home in the Australian Outback, a father and husband, Joshua Connor (Crowe) is especially dealing with those losses. He lost all three of his sons to the war, all three of his boys killed during the fighting at Gallipoli. Years later, his wife is finally undone by the loss of her boys and takes her own life, leaving Joshua alone and looking for answers. Where does he look? Both for his own sanity and for the memory of his family, Joshua decides to go find his boys, or at least their bodies buried somewhere in the hell that was no man's land. Bodies were often buried where they fell and a huge effort has been made to identity the corpses but what a daunting task. Connor figures he has no better alternative and leaves Australia, traveling to Turkey and the scarred battle sites, looking for some sort, any sort of closure.

Come on now, it's Russell Crowe! This is a throwback type of star who you could see starring in any number of big screen epics, biblical stories and large scale westerns. He's got the on-screen persona and the acting chops to carry the load so it's appropriate that Crowe cuts his directing teeth on a large-scale period piece with the aftermath of World War I as its backdrop. This is the guy behind Gladiator, Master and Commander, Robin Hood, even a western like 3:10 to Yuma. He knows what he's doing, and that's pretty clear from the get-go!

The premise is a little bit like a quixotic venture straight out of Don Quijote. It is a man searching for something, for answers, for closure, like a needle in a haystack. That father looking for answers has been explored with a whole unintentional sub-genre of films, anything from In the Valley of Elah to Shenandoah. 'Diviner' works in those heavy, emotional father son moments, most of that relationship shown through three or four quick flashbacks. We never get to learn much about Joshua's boys so all we have to rely on is that always important relationship between a father and his sons. Who will he meet along the way? What will he find? That's the beauty of the road story like this, albeit with some tweaks here and there. The post-WWI backdrop is fascinating, unsettling and uncomfortable. I know little about the history in Turkey in the late 1910s/early 1920s, but it was clearly an incredibly turbulent time. In other words, how do you find what happened to three young men in a war that took millions, four years later, and that country is still at war? Let the search begin.

Russell Crowe is the Man. He's one of my favorites, a star who's struggled over recent years to find those great roles that turned him into a star, Gladiator, A Beautiful Mind, The Insider. Like John Wayne in a western, Crowe looks and feels comfortable in these historical period pieces. It is a strong, emotional, sympathetic part for Crowe as he plays Australian rancher/father/husband trying to find some answers, any answers, to bring some closure to a hellish situation. The acting and the character provide the heart and crux of the story. It's hard not to sympathize with a father who at least partially blames himself for the deaths of his sons. The quiet moments resonate, especially as he continues to read to his boys long after their death....because that's what fathers do. The most gut-wrenching scenes have Joshua out on the still war-torn battlefields, trying to find some clue or evidence of his boys.

Who else to look for? The most familiar face is Olga Kurylenko as a Turkish woman and single mother who owns a hotel in Turkey and gives a room to Connor in his search. Yeah, the developing love story isn't the greatest, but it isn't awful either, two struggling people finding a bond and potentially more. Dylan Georgiades is solid too as her young son who clicks immediately with Connor. I thought the best supporting parts were Yilmaz Erdogan and Cem Yilmaz as two Turkish officers who get involved with Connor as he searches, all the men working through some hatred, prejudices and biases. Also look for Jai Courtney (Unbroken, Starz's Spartacus), a budding young actor who seems destined for big things. He plays a British officer tasked on the burial detail of finding, identifying and re-burying the dead soldiers from the fighting years before. The Connor boys are played by Ryan Corr, James Fraser, and Ben O'Toole.

Making his directorial debut, Crowe set out to do something daunting in directing a big, sprawling and emotional epic set against a family backdrop in a world still torn apart by war. For the most part, I think he succeeded. There are moments where maybe a bigger budget would have helped, but nothing crippling. The battle scenes are violent and uncomfortable but not graphic. It is a beautiful-looking movie with Australia and Turkey both serving as filming locations. The musical score is big and booming without being overbearing as well. 'Diviner' is at its strongest moments with Crowe's Connor out on the trail, in offices, traveling, doing anything he can to find his sons. It slows down at times when the love story develops, but things definitely pick up in the finale. A tad slow at times in general, but overall? A successful debut for Mr. Crowe. An easy movie to recommend!