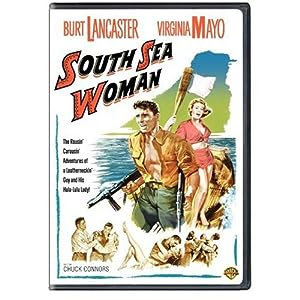 Working with stars like James Cagney, Gregory Peck and Burt Lancaster among others, it would have been easy for Virginia Mayo to get lost in the shuffle of the casts in her movies. She could have been a pretty background piece that didn't distract from the movie, letting her male co-stars do the heavy lifting.  Mayo started her career as a dancer and singer but transitioned into film. Not in many classic movies, she never achieved huge stardom but through the 1940s and 1950s, Mayo was almost always a good choice to play a strong female character without getting overwhelmed by her co-stars.

Released in 1953, South Sea Woman is a good indication of Mayo's talent.  Working alongside Lancaster for a second time after their pairing in The Flame and the Arrow with Chuck Connors playing the other lead role, she always remains at the forefront of this oddity of a movie.  The TCM description read 'A Marine sergeant battles Nazi agents to help a showgirl escape war torn China.' Having watched the movie now, I can say that is one of the most inaccurate plot descriptions I've ever read. Did the person who write that even see the movie? Regardless of its inaccuracy, the premise -- however wrong -- seems fairly serious, but this is a WWII comedy. Confused much? I certainly was in the first 15 minutes or so.

Brought up on a variety of charges at a court martial trail, Marine Corps. Sergeant James O'Hearn (Lancaster) faces over 100 years in jail and even possible execution if he is found guilty.  The veteran sergeant though remains completely quiet at his trial, prepared to face any and all charges which include everything from destruction of countless robberies, theft, and the most severe, desertion from his post.  Nothing rattles O'Hearn even as the trial begins, the story revealing itself how he got into this spot. One of his Marines, Pfc. Davey White (Connors) was trying to marry a camera girl in a bar in Shanghai, Ginger (Mayo), who O'Hearn thinks is into the young Marine for all the wrong reasons.  In hopes of helping White, O'Hearn ends up getting left behind when his unit sails, setting off a chain of events that no court is seemingly going to believe.

So for starters we've got a courtroom drama done in flashback mode with more comedic moments than you could ever count on concerning a story about two Marines and one beautiful woman all set around December 7th, 1941 when Japan attacked Pearl Harbor. It all seems like a natural fit for a story, doesn't it? I was skeptical when TCM host Robert Osborne explained that this seemingly WWII drama was in fact a comedy, but I went along for the ride. It is an uneven movie, and the humor isn't physical or slapstick thankfully. It's the natural humor that can arise out of perilous situations that ends up working the best. It never gets too heavy-handed, and when the time comes there's a sharp turn back to the dramatic.  Fun while it lasted though.

Throw all these different elements together, and you're certainly going to get your money's worth.  The movie is only 99 minutes, but director Arthur Lubin certainly packs a lot into that running time. The courtroom testimony -- including witnesses Mayo, Leon Askin, and Veola Vonn among others -- serve as a set-up for the flashbacks which tend to be episodic in nature. Lancaster, Mayo, and Connors certainly cover a lot of ground, running from gangsters, stowing away on a Chinese sailboat, getting shipwrecked on a remote island paradise, and then getting back into the war effort around Guadalacanal.  As crazy as it sounds though, 'Woman' never feels disjointed. The story just keeps flowing along with that nice balance of drama and comedy.

If you're going to make a dramatic comedy or a funny drama, you can do a whole lot worse than Burt Lancaster, one of those few actors who can handle both genres within the same movie. He's a genuinely funny performer, whether it's a subtle line delivery (like wooing Vonn's Madame's three non-English speaking nieces) or physical movement like masquerading as a hula dancer while still wearing his Marine-issued boots and a grass skirt. Mayo is similarly able to handle being really sexy while still being funny. So often, it's one or the other.  She has a great chemistry with both of her male co-stars.  This was Connors' first major role, and he more than handles his own with Lancaster. They play off each other well, rivals always willing to fight who are also close friends.

The courtroom drama and its flashbacks (which dominate the movie, the trial is only a jumping off point) develop and head toward that drama in the finale which surprised me.  The ending though -- and a key revelation about one character -- did provide a twist I didn't see coming as O'Hearn and White get back into the war effort in a big way.  Other performances include Barry Kelley, Paul Burke, and Raymond Greenleaf  as officers of the court, Bob Sweeney as the defense and Hayden Rorke as the prosecuting lawyer, and Arthur Shields, William O'Leary and John Alderson as members of O'Hearn's makeshift crew he assembles when stealing a yacht. Even a young Strother Martin has an uncredited part as a Marine at the trial.

Odd little movie, but one that works surprisingly well when considering all the different elements assembled here.  Through drama or comedy though, the reason to see it is the cast, especially Burt Lancaster, Virginia Mayo and a very young Chuck Connors.