Every Which Way But Loose 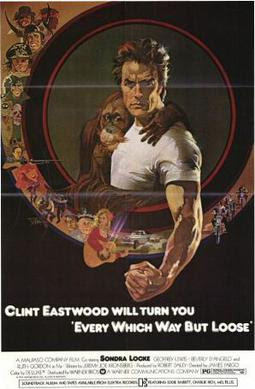 Clint Eastwood is one of the few people around in the movie business who deserves the honor and title 'screen legend.' Starting off as a TV star in the 1950s and 1960s, he made the jump to films with Sergio Leone's Dollars trilogy and then became a huge star back in America with the Dirty Harry series among many others. Not content with just starring in movies, he's made a name for himself as one of the best director/storytellers out there behind the camera. Read through his filmography, and you'll see countless classics and near-classics.  By all accounts, 1978's Every Which Way But Loose is not one of them.

As a huge Eastwood fan, I've done my best to try and view all his movies -- directing and/or starring.  This one just sounded too weird, too off the beaten track.  I'll go into more detail about this flick, but take away everything and anything else, and this movie is about one thing that can be summed up in one simple sentence...Clint Eastwood takes a road trip with an orangutan named Clyde. There you go, that's it. Yes, there is more to this movie, but that's the gist of it.  If just reading that sentence doesn't amuse you even a little bit, I'd wager you probably would not like this movie. For that reason -- among others -- I liked it as a prime example of what a quality 1970s movie can be.

A trucker and a bare-knuckle boxer, Philo Beddoe (Eastwood) is an all-around pretty easy-going guy. He works, he drinks, he hangs out with his best friend and promoter, Orville (Geoffrey Lewis), and lives at home with his aging mother (Ruth Gordon) and his orangutan, Clyde, who he won in a fight. He meets aspiring country singer Lynn Halsey-Taylor (Sondra Locke) and falls for her quickly, only to find a note one day that she's left. Packing up his things, Philo jumps in his truck and goes after her with Clyde, Orville and a woman named Echo (Beverly D'Angelo) along for the ride. He doesn't know where Lynn went, but he intends to find her. Also on his trail is a biker gang called the Black Widows and two police officers looking to exact some revenge on him.

By 1978, Eastwood had created a name for himself as quite the tough guy actor, one of the best around at the action and adventure flick. So a movie where he drives around with an orangutan seems natural, doesn't it? The script was originally intended for Burt Reynolds, but Eastwood read it, liked it and brushed aside studio concerns that it wasn't an appropriate movie for him. It was a movie that was panned critically, but audiences loved the movie as it grossed over $100 million in theaters. It is easy to see why moviegoers were drawn to this movie. It is an easy-going, fun story that as many IMDB reviewers point out is a good late night guilty pleasure or a rainy Sunday afternoon flick.

This is the type of movie that could only be made in the 1970s, and at that with the backing of one of the most bankable stars in Hollywood in Eastwood.  There isn't a plot as much as a series of bits and vignettes that keep things moving along. The soundtrack is mostly country -- with Eddie Rabbitt singing the theme 'Every Which Way But Loose,' listen HERE -- but also featuring performances from Charlie Rich, Cliff Crofford and even Locke singing a couple songs. The villains -- the Black Widows biker gang and two vengeful cops -- are there more for comedic relief than anything, and never really seem too intimidating or much of a challenge. The humor is pretty low-brow (at one point Eastwood seeks out a zoo to get Clyde some action), the boxing and fighting as brutal as they get, and through it all you can't help but enjoy it. Okay, I enjoyed it. I can't speak for you.

Playing against type, Eastwood looks to be having some fun with his part as Philo Beddoe. Yes, he's a fighter and tough guy, but this has to be one of his most human roles. He thinks he's found something with Locke's Lynn and doesn't know why she left. Philo just wants to be happy. Frequent co-star Locke has the chemistry she always had with Eastwood, delivering a solid twist at the end of the movie I didn't see coming. Lewis and D'Angelo similarly have a good chemistry together. Lewis is one of those faces you love to see in 1970s movies, a character actor who starred in countless classics, and Gordon is a scene-stealer as foul-mouthed Ma. The bikers include John Quade, Roy Jenson, Bill McKinney, Dan Vadis and William O'Connell while Gregory Walcott and James McEachin play the dimwitted cops.

Now onto the unquestioned star of the movie...Clyde the orangutan! The formula sounds so simple; throw Eastwood into a movie with a monkey and have him interact. It's criminally stupid, but somehow it works.  We're not talking intelligent humor here, but Clyde ends up being probably the most memorable character from the movie. You end up thinking of him as a person by the end of the movie. And come on, a monkey flipping off a bunch of angry bikers is hilarious however you cut it. This movie has a lot going for it when it really shouldn't, but Clyde the orangutan is maybe the best character ever. A guilty pleasure if there ever was one, but a good one...even if I'm not proud of how much I liked it.