A Bullet is Waiting 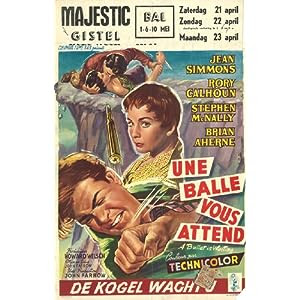 The plot description at Turner Classic Movie's website sounded promising enough for 1954's A Bullet is Waiting, aired as part of star of the month Jean Simmons' movie marathon. It read 'A plane crash strands a policeman and his prisoner in the wilderness' so I went in anticipating a film noir set in the west somewhere with a tense battle of nerves as policeman goes mano-a-mano with his prisoner. I was sorely disappointed then when I actually watched it, finding that while the description was accurate, it wasn't completely accurate.

Transporting his prisoner wanted for murder, Ed Stone (Rory Calhoun), back to Los Angeles, Sheriff Munson (Stephen McNally) is instead dealt a new problem when the plane they're flying in crashes somewhere in the mountains and hills of Utah. The pilot is killed, but both sheriff and prisoner survive and are met soon after by a young woman, Cally (Simmons), armed with a rifle who lives on an isolated sheep farm deep in the hills. With Munson's ankle possibly broken, the trio hole up at the small farm, waiting for Cally's father, David (Brian Aherne), to return from a lengthy trip to town while the ankle heals. Seeing the beautiful young Cally, Ed goes to work, wooing her in hopes of somehow escaping. Munson though is not telling the whole story, and it is only a matter of time before his secret comes out in the wash.

My first thought was that this story sounded similar to an Anthony Mann western, The Naked Spur, released a year before in 1953. The basic premise is similar; prisoner being transported to jail/trial, starts to play mind games. Even the small cast seemed alike. Instead of getting that in the form of a film noir though, this movie delves quickly into some philosophical metaphor for something bigger. Cally's father is a former Oxford professor writing a book about philosophy which at one point she reads to the two men. The characters go in depth of their own personal philosophy, beliefs and principles, at one point Calhoun's Ed alluding to the story of the Garden of Eden.

Now bear with me because I can overthink a movie like nobody's business. The Garden of Eden, you say, hhmm? We've got Adam -- that'd be Calhoun -- and Eve (Simmons, that one's easy), the devil/snake (McNally's suspicious Sheriff), and God (the father), all out in this isolated world where no outside contact is easily or readily made.  Director John Farrow uses long, slow shots of nature to set scenes up; the sun poking up over the horizon, sheep running around the farm, storm clouds unleashing torrents of rain, drops of water dripping off the roof of the house. It all seems to point -- to my mind at least -- to be some metaphor to the story of the Garden of Eden. Thrown in with far too much philosophizing and delivering of a message, and the seemingly simple story gets over complicated quickly.

None of this is aided by some casting that just doesn't work. Jean Simmons was Turner Classic Movies June star of the month with this movie aired as part of the festival. One of the most classically beautiful actresses to ever hit the silver screen, she was also one of the best actresses around in the 1940s, 1950s and 1960s. She will be eternally watchable with an easy-going way about her, and while it isn't her performance that cripples the movie, she is miscast. Simmons has the look of a delicate flower out in the wilderness that just doesn't belong. Hair cut short but styled nonetheless, make-up always immaculate, she looks out of place.  It doesn't help that her character has the potential to be a strong-willed, intelligent woman, only to be a defenseless, crying little girl by the end worried about the man she's fallen in love with.

As for the three male members of the cast, I'm thinking a batting average of .333 overall.  Calhoun works to a point, but McNally and Aherne are a swing and a miss.  Playing a prisoner supposedly wanted for murder, Calhoun is his typical smooth rogue who will prove validated in the end. He doesn't have the greatest chemistry with Simmons though, towering over the diminutive actress in their scenes. McNally is just a bizarre character, especially as we find out more about his Sheriff Munson and his motivations.  Aherne does not make an appearance until very late in the movie just in time to iron everything out and put all the pieces where they belong.

It is the little things that throw me off as is so often the case. Simmons hides the rifle, and McNally somehow can't find it even though it's not that well-hidden. Calhoun carries a knife in his belt at all times, but nothing comes of it, the Sheriff never even demanding he give it back. If anything, McNally's Munson just sits around moping much of the movie. The best is saved for last though in one of those really bizarre moments that I really don't want to spoil here.  I sat the movie out thinking there might be some redeeming quality in the end, but I was wrong again. The movie ends on a laugh -- okay, an attempted laugh -- as the characters literally ride off into the sunset. Pass on this one.