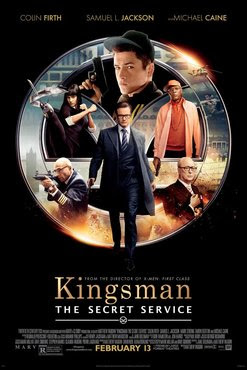 Does the name Matthew Vaughn ring a bell? Well, it's not necessarily a household name...yet. A director, producer and writer extraordinaire, Vaughn has been behind such movies as Layer Cake, Kick-Ass, X-Men: First Class, The Debt, and even the upcoming Fantastic Four reboot. His most recent flick, 2014's Kingsman: The Secret Service, is pulling in the dough. Who knows? It might not be too long before Vaughn is definitely a household name.

Part of a secret spy organization working in England with a history dating back to the early 20th century, the Kingsmen, gentleman spy Harry Hart (Colin Firth), codename: Galahad, is on a mission in the Middle East, when a fellow young agent is killed saving his life. Back in England, Harry meets the agent's young son and some 17 years later saves him from a nasty encounter with the police. Why the encounter so many years later? Harry recruits young Gary 'Eggsy' Unwin (Taron Egerton) to become the newest agent, the newest Kingsman. Having grown up on the streets, Eggsy is intelligent, tough and quick-thinking, but he hasn't always lived up to his potential. Now, Harry needs him to live up to it if he hopes to beat the other candidates. Trouble is on the horizon in the form of Richmond Valentine (Samuel L. Jackson), an internet billionaire with a horrific plan to alter Earth's future. The key to it all, that could be feisty, stubborn Eggsy.

Let's give Mr. Vaughn credit where it's due. This is a guy who knows what kind of movie he wants to make, sets out to do it, and screw anyone who gets in his way. No, I'm not saying he's some sort of movie studio bully. It's just that Vaughn makes movies unlike just about any other movie currently in theaters. Helter-skelter, schizophrenic, stylish, smart and equal parts stupid, this is just a ridiculously fun and entertaining movie. It most assuredly is NOT for everyone. The violence is cartoonishly over the top and stylized, the humor a little low-brow at times, but my goodness, what a fun movie.

The British spy movie has a long and rich history, starting obviously with the James Bond/007 franchise. It's the rare movie that is able to put a new spin on the spy genre, but 'Kingsman' does it with violent glee and fun. This is a smart movie, poking fun at the genre without venturing into spoof territory (thankfully). The script from Vaughn and Jane Goldman is self-conscious, some great dialogue scenes between Firth's Harry and Jackson's Valentine discussing the backgrounds of the gentleman spy and the maniacal villain trying to take over the world. Fans of the genre will get a kick out those moments, the quieter, smarter and lower key moments that balance out the general craziness of the rest of the movie.

Reviews were generally pretty mixed about star Taron Egerton, but I came away impressed with the young British actor. He definitely holds his own in the dramatic scenes with quite the cast surrounding him of dramatic star power. When it comes to the action scenes, Egerton shows off his physical prowess, blending in seamlessly. It doesn't hurt that he's got that cocky smirk ready with a snap to disarm a scene with ease. How about some star power though? Constantly wearing the layered look and showing off a flat-brim hat and rocking a lisp, Samuel L. Jackson is clearly having a ball as Valentine, the villain with a plan to save the world by some horrifying means. This isn't a nutso villain. His plan is certainly...interesting, but he's also squeamish around blood, a bit of a goof and loves a good McDonald's cheeseburger. Also look for Sofia Boutella as Gazelle, Valentine's foot-less hench-woman who uses bladed prosthetic legs as deadly weapons.

The casting of three British actors was what originally caught my eye and kept me interested as a release date drew closer. Enter Colin Firth, Michael Caine and Mark Strong. One of the most talented actors currently working in film and the prototypical British gentleman (on screen at least, he may be a wild man in his personal life), Firth absolutely nails the movie. Let's call it Liam Neeson Mode, a highly respected actor taking on a more fun role. He plays the straight man to all the shenanigans, but man, is he having fun. The same for Strong as Merlin, a fellow Kinsgman and a drill sergeant of sorts, barking out orders with a bit of a Scottish brogue as his potential agents navigate training. Oh, and that Michael Caine guy. Have you heard of him? It's a smaller part, but an essential one. How can you go wrong with that trio? I submit that you CANNOT. Also look for Mark Hamill and Jack Davenport in supporting parts.

The history of the Kingsman would be an interesting prequel in itself, a group of agents and spies with code names from the legend of King Arthur, all criss-crossing the world to stop all sorts of diabolical plots. A highly recommended movie with some ridiculously stylized violence, some great one-liners, style in general to burn, and a 'Screw you' type of attitude. It's the type of movie that doesn't care if you like it. It's just interested in being a ton of fun.