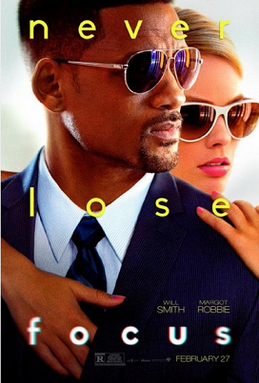 I'm a 90s child. I grew up watching Will Smith in movies like Men in Black, Independence Day, Enemy of the State, even Wild Wild West which isn't good but man, I like it a lot. His movies in the 21st Century have been fewer and far between, some really good and some really bad. When I saw the previews for 2015's Focus, it looked like Smith was getting back to basics, audience-pleasing turns that will rake in the money at the box office. What's the verdict then?

Nicky Spurgeon (Smith) is a con man, a world-class con man. He specializes in big but not huge cons, usually working with a team of like-minded crooks. Their targets? Big events, especially sporting events like the Super Bowl. Nicky has years of experience under his belt, and he knows just about every trick in the book. Well, he may have met his match. A beautiful, inexperienced con woman with some untapped potential, Jess (Margot Robbie), approaches him about joining his crew as they prep for a week of cons, thieving and stealing at the upcoming Super Bowl. Against his better judgment, Nicky takes her on and teaches her some of the tricks of the trade, all of which she takes to quickly. Talent is one thing though, money a whole other thing, and a mutual attraction the most prickly situation to arise. With so much on the line, what's in store for the experienced Nicky?

First things first. I wanted to like this movie. I really like Will Smith and Margot Robbie is one of the biggest rising stars in movies these days. Oh, and she's halfway decent looking. I love movies about cons and heists and impossible robberies. That's the movie I thought I was getting. It wasn't. This isn't a heist movie with a will they, won't they subplot. Unfortunately, things are flipped in that sense.

'Focus' could have been pretty good. The opening 45 minutes are pretty cool as director/screenplay-writing combo Glenn Ficarra and John Requa dive in headfirst to the high-class world of con men and their business. When Nicky introduces Jess to all the schemes they can pull with an extensive team of crooks in a public setting, it's that perfect kind of introduction. Fast, stylish and smart, it all blends together in seamless fashion. That's just the introduction though. It's only a jumping off point unfortunately. From there on in, 'Focus' becomes more about the relationship between Smith's Nicky and Robbie's Jess. That's not a bad thing because the duo has a believable, likable chemistry, but...

That wasn't the movie I thought I was getting into. The trailer, the previews on TV, the posters, it all looked like a smooth, darkly funny look into this criminal world. Maybe a little familiar, but who knows? I avoided reviews for the most part -- no spoilers for this guy -- so I could go in with a fresh slate. No matter how good Smith and Robbie are (and they are pretty good), the story still remains that 'Will they? Won't they?' angle that seems more suited to a bad 1990's TV sitcom. As the story jumps in time from New Orleans Buenos Aires, it always comes back to that angle. Charming star power is rarely a bad thing, but 'Focus' relies almost solely on it with a story that had a lot more potential. I never even thought of it as a 'dark comedy' but that's what it is listed as. Even those attempts at humor -- many of them pretty low-brow sex jokes -- fall short or feel forced or both.

So pretty people with chemistry? Yeah, it works. This is the kind of part Smith is cut out for. He can act as he's shown in Ali and Pursuit of Happyness, but I like these parts more. Smith's Nicky is smooth, confident and always seems to be a step ahead. Nothing seems to rattle him...except when Robbie's Jess arrives on the scene. Their chemistry is excellent, but the screenplay simply relies on it too much. It isn't a con movie with a love interest. It's more of a love story with a con angle. Too bad. Also look for Rodrigo Santoro, Adrian Martinez, Gerald McRaney, BD Wong and Brennan Brown in supporting parts. I don't want to explain too much about these parts and ruin any possible surprises. Go in with a clean slate like I tried.

Two things. One, I think 'Focus' is just trying too hard. It so desperately wants to be cool and smooth and uber-suave, but it never quite gets there. The screenplay had a ton of potential but gets weighed down under bad sex jokes, forced jokes and a wandering story. Two, the twists. Movies have become obsessed with delivering a mind-blowing twist(s). The finale here is one twist on top of another, burying the one potential good twist in a sea of other efforts that fall far short. The ending itself is pretty ridiculous, one long exposition after another explaining what just happened, and then, oh yeah, the movie is over. I really wanted to like this one, and I just couldn't get on-board.