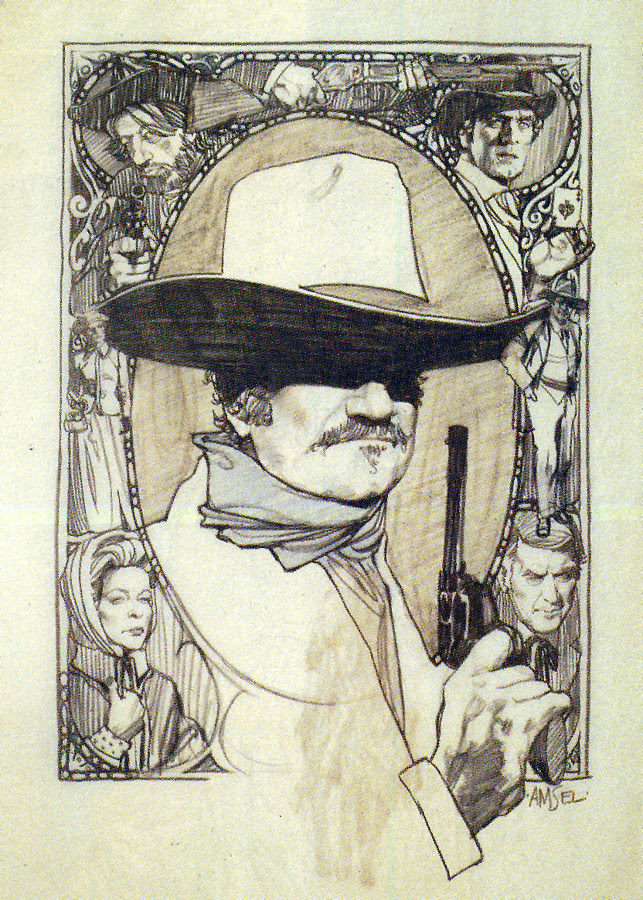 As a movie star, you don't always pick how you get to ride into the sunset on the horizon.  For many, their days as a star are long past.  Others just never get that right role that allows you to end on a high note.  Well, there is an exception to every role, and that's John Wayne, one of the most iconic stars to come out of Hollywood's first 50 years with sound films. A star whose popularity went up and down some over a long career, Wayne was always in the public eye with his movies, his last part being one of his best all-time parts, 1976's The Shootist.

During the mid 1970s when Wayne was in the process of making his last few movies, The Duke was struggling with stomach cancer that would ultimately end up killing him in 1979.  More than any other time in his career, Wayne resorted to playing a version, a caricature of himself in the late 1960s and into the 1970s.  There was a comfort factor involved for both the actor and the audiences who still loved seeing him on-screen.  With an exception here and there, none of these later movies are classics, but they're all entertaining.  The Shootist is one of those few exceptions, a classic thanks almost exclusively to Wayne's performance in the title role.

It's 1901 and infamous gunfighter J.B. Books (Wayne) rides into Carson City to see an old friend of his, Doc Hostetler (James Stewart). Books has been feeling poorly, and the Doc confirms the bad news; he has cancer and only has a few months to live. The gunfighter takes a room at a boarding house run by a recent widow, Mrs. Rogers (Lauren Bacall) and her troublemaker son, Gillom (Ron Howard).  Books goes about wrapping certain things up with his life as he prepares to die, putting things in place and tying up some loose ends.  But the Doc warned him, letting the cancer kill him will be a long, drawn out and incredibly painful process.  If there was a way to quicken that death, he recommends Books do it.  So knowing what awaits him, the older, worn-out gunfighter puts together one last moment of glory.

Seven years earlier, Wayne won his first and only Academy Award for his performance as Rooster Cogburn in True Grit.  In a sense, it was a lifetime achievement award for all he had accomplished in his career.  But just on performance alone, his John Bernard Books ranks up there as one of his all-time top five.  It is a part that Wayne was born to play, plain and simple.  His Books is a dignified man with a reputation as a killer, a man who lives by certain principles and expects others to do the same.  He doesn't apologize for his past and to a certain point, is frustrated with the life he has led where every young punk with a gun wants to kill him to prove how good they are.  Easily one of the Duke's best parts, and a fitting end to a great career.

Directed by Don Siegel, 'Shootist' brings together an excellent cast, almost like a going away party for the Duke.  Having worked together 20 years before in 'Blood Alley,' Bacall and Wayne are perfect together with some of the best on-screen chemistry Wayne ever had with a female co-star.  Their scenes flow so easily, and it's just fun watching two pros show what they can do with good material.  The same for young Ron Howard who plays a different character than the viewer is used to considering his Andy Griffith and Happy Days roots.  Books becomes a bit of a father figure to Howard's Gillom and tries to teach him the lessons of how to be a man.  Along with Stewart as the doctor, there's Harry Morgan as the town sheriff, John Carradine as the undertaker, Sheree North as a lost love of Books, and Scatman Crothers as the livery stable owner.

The story builds to a certain point, and you dread where it is going -- even knowing it is where it has to go.  Books takes the Doc's advice and arranges a way so three men who would love nothing more than to put a bullet in him meet him at the same place.  If all goes well, he'll go out in one last blaze of glory, avoiding whatever the cancer can throw at him.  The trio include Richard Boone, Hugh O'Brian and Bill McKinney, all three waiting for him in a saloon. The ending is foreshadowed in a line delivered midway through the movie, but it still comes as a bit of a shock.  Of his 170 or so movies, John Wayne actually died in just eight movies, and few are as moving as this one. You can watch it HERE, obvious SPOILERS.

Beyond the sets, background and lack of gunplay, this is a movie entirely devoted to character, specifically John Bernard Books and the last few days of his life.  It is a western focusing on the changing times as the old west becomes a thing of the past, the U.S. advancing forward into a new time.  In that way, it's appropriate that the Wayne character wants no part of it.  As some characters point out, he is a relic from the previous times.  His exit then is only appropriate, going out as he came in.  One of Wayne's best and an underrated western overall.