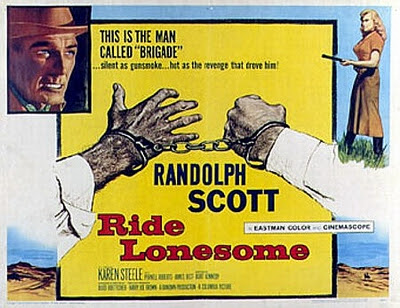 Last fall I reviewed a western from director Budd Boetticher, Buchanan Rides Alone, one of seven pairings with star Randolph Scott.  'Buchanan' was one of the two I hadn't seen prior, and I enjoyed it, if not as much as the other pairings.  Everyone has their favorites, but one always stood out from the others for me, 1959's Ride Lonesome, a western typical of the Boetticher/Scott pairings.

These were B-westerns, but in the most positive sense of what a B-movie can be when handled the right way.  Almost criminal in their simplicity, these are must-see westerns for fans of the genre.  'Ride' has all the necessary elements; a tough, veteran cast, scenic Western locations, and a solid if unspectacular story that almost always features a twist or two.  I won't say the films are a romantic portrayal of the old west, but at times it sure feels like it.  Instead they followed a trend in the 1950s of more adult westerns, including a string of Anthony Mann and James Stewart westerns that are some of the best the genre has ever produced.

A former lawman turned bounty hunter, Ben Brigade (Scott) captures young outlaw Billy Joe (James Best), wanted for murder in Santa Cruz.  Stopping over at a stagecoach station, Brigade runs into two men who tread that fine line on either side of the law, Boone (Pernell Roberts) and Whit (James Coburn). Anyone who brings Billy in earns an amnesty for past actions, and Boone and Whit intend to collect.  Along for the ride is Carrie Lane (Karen Steele), the recent widow of the stagecoach station's owner. Brigade doesn't plan on giving his prisoner over to Boone and Whit, but he knows trouble is following them and he'll need their help.  Wearing out horses behind them, Billy's brother Frank (Lee Van Cleef) and his gang are hot on their trail.

There are typically three different variations of characters in a Boetticher western -- four if you count the damsel in distress.  There's the good, the bad and the yet to be determined.  Scott always play the good, if a somewhat tortured good.  The bad is the straight villain with no basically no chance of survival (sorry Lee).  And third and the most fun is the yet to be determined, played here by Roberts and Coburn.  These are the characters you're not quite sure which way they'll go.  Will they turn on the good guy Scott or stay on the righteous path?  It depends on the movie which way they turn, but there's always that sense of mystery.  It's also the meatier, more showy character to have, but more on that later.

As the steely-eyed, tortured good guy, Scott has about 20 lines to say in the whole movie.  The thing is? He doesn't need to say more than that.  He's a man of few words with principles and beliefs he lives by, end result be damned.  Scott is going to do the right thing no matter the cost.  His Brigade has a past incident haunting him -- as most of his characters did in the Boetticher westerns -- and he will right a wrong whether you want him to or not.  The more showy character is Roberts playing Boone, an outlaw looking for a second chance.  He has this easy way about him that you can't help but like him, even if you're curious what he's really up to.  A real scene-stealing part.  Coburn in his first movie also shows some of the talent that would make him such a big star in the coming years.

On to the other elements, this one has the good and bad.  Karen Steele plays the eye of everyone's affection, the babely widowed station owner's wife.  Her platinum blonde hair and bras that could take an eye out look out of place, but her character is a whole lot tougher than most female characters in a western. Her looks sure don't hurt though.  Best isn't given much to do other than negotiate for his release, and Van Cleef only has two scenes where he actually talks.  For filming, Boetticher chose the California deserts and mountains, and along with cinematographer Charles Lawton Jr. turns in a gorgeous looking western that rivals some of John Ford's best in Monument Valley. The score by Heinz Roemheld is nothing special, but that's a minor complaint.

At just 73 minutes, there isn't a wasted moment or unnecessary scene anywhere to be found.  Some reviews call it a dull or slow-moving story, but the time flies by.  It isn't heavy on action if that's what you're looking for, instead building up to these quick outbursts of gunfire after long scenes of quiet.  The dialogue from screenwriter Burt Kennedy is top-notch and features some quotable western lines while also giving some inspirations for Sergio Leone and the Dollars trilogy.  It is available to watch through Youtube (here's Part 1), but it's in pan-n-scan.  If you can find a widescreen version, I'd recommend watching that one.