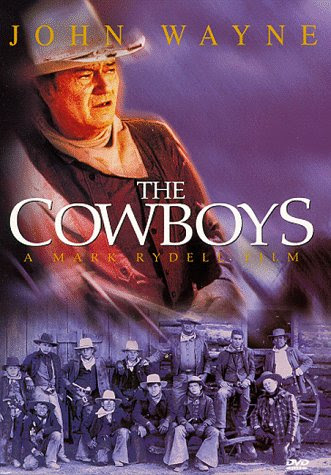 At a certain point in his career, John Wayne started taking flak for playing himself in all of his movies instead of playing a different character each time around.  This criticism typically applies to Wayne's movies from the late 1960s and early 1970s, and in a lot of cases the criticisms were valid.  But lost in the shuffle sometimes is that the huge star turned in three of his all-time best performances during this span, including his Oscar-winning turn in True Grit, his last performance in The Shootist, and in 1972's The Cowboys.

It is a western that has taken its fair share of abuse over the years, especially for the message given late in the movie.  But where so many American westerns had become so blah in the 1960s, 'Cowboys' tries for something different instead of the same old worn down story.  By now Wayne had been a star in movies for over 30 years and many moviegoers had grown up watching him on-screen.  So playing the starring roles in this Mark Rydell-directed western, why not take that notion on a bigger level?  The Duke steps into a starring role that has him as a surrogate father for a dozen cowboys, make that 'half-cowboys,' for now that is.

Looking to drive his 1,200 cattle to market, rancher Wil Andersen (Wayne) is in trouble.  A recent gold strike has brought every man in the territory and left the rancher with no cowboys to drive the cattle.  Andersen turns to the only people available, 11 boys ranging from 9 to 15 from the local schoolhouse, who get a crash course in being a cowboy.  With only one other man, black cook Jebediah Nightlinger (Roscoe Lee Browne), along for help, Andersen sets off with his herd.  The cowboys learn driving a herd of cattle isn't as glamorous as it sounds with long hours in the saddle and little chance for rest.  But slowly but surely, the cattle moves along as Andersen's crew begin to figure the job out.  When it seems nothing can stop them though, Andersen realizes a gang led by a rustler (Bruce Dern) is tracking them with eyes set on stealing the herd.

SPOILERS STOP READING SPOILERS In a career that spanned five decades, John Wayne is legendary for any number of things, but one thing more than most makes for that sort of trivia movie buffs (myself included) love.  The question is how many movies did he die in on-screen?  The answer is 8 -- if you can name more than two, kudos to you -- and The Cowboys is one of them.  Making it more shocking is not the fact that he does die, but how he dies.  Wayne's Wil Anderson beats the bejesus out of Dern's character and walks away from him like he couldn't be bothered with this excuse for a man.  Dern proceeds to shoot him in the back/arm/legs/stomach four times.  This all leads to an ending many have an objection to.  END OF SPOILERS

Along the trail, Andersen teaches these young cowboys how to do their job, for their benefit and for his.  That's the part that sets this role apart from the average Wayne movie.  He teaches these boys how to act like men, how to grow up, and how to handle yourself in situations where it would be easier to turn tail and run than stand your ground.  As the special features on the DVD discuss, Wayne both on-screen and off took a fatherly role to these kids.  It's a great performance as he acts with several young actors with experience and others with none who had a rodeo background.  They range from Robert Carradine (in his film debut) and A. Martinez as the oldest cowboys at the ripe old age of 15 all the way down to the youngest like 11-year old Clay O'Brien. All of the cowboys have a natural, easy way about them when acting, and it's a shame many of them didn't continue in the acting department because there's some talent there.

To film the movie, Rydell teams with cinematographer Robert Surtees, filming all over California, New Mexico and Colorado, the end result being a gorgeous-looking western with a wide variety of locations that help give the impression of the cattle drive actually moving south.  Also worth mentioning is John Williams' score that you will be whistling along, humming in your head for days afterward. Listen HERE if curious. There's two main tracks, the cowboys theme and Dern's theme, sounding like a rattlesnake about to strike.

Two supporting parts help anchor the movie, those being Lee Browne as Nightlinger and Dern as Asa Watts, dubbed 'Long Hair' in the credits.  Both were classically trained actors, but they fit in as smoothly as possible here (also look for Slim Pickens in a small part).  Wayne famously told Dern before they shot his death scene "Oh, people are going to hate you" and he was right.  Who shoots John Wayne in the back?  His villain is perfect because in other movies Wayne dies in, it's a nameless soldier doing it, but here we get a pure evil bad guy.  It all produces an ending many objected to; the cowboys getting revenge on Watts and his rustlers -- watch it HERE -- and in a sense becoming men.  I think it's a ridiculous notion because the ending makes sense.  They're not killing Watts because they have a bloodlust, they're doing it because there's right and wrong. But still, some audiences objected, but I'll leave it up to you to decide. The movie's a good one, and that's all that matters to me.