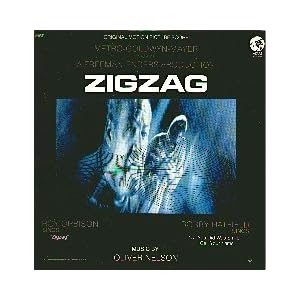 No VHS, no DVD, no Netflix or Amazon Instant. I had never seen a second of 1970s's Zigzag much less heard of it. It has been almost completely forgotten over the last 40 years so when it appeared on TCM's schedule I took my chance. How many chances do you get to see certain movies? Not a ton. Here though it's fairly obvious why this flick has been pushed to the side.

Working for an insurance company, Paul Cameron (George Kennedy) is diagnosed with a malignant brain tumor, his doctor estimating he has anywhere from a few months to a year to live. Cameron has a wife (Anne Jackson) and young daughter who he does not want to leave with a burden following his death, but what can he do to help them out? He goes through the files of an unsolved kidnapping/murder and knowing many of the facts, frames himself for the murder. Through a series of twists and turns, his wife will receive a reward for "solving" the murder. Somehow and some way, Cameron's plan works...to a point. Doctors discover he isn't going to die. Now Cameron has to prove he made the whole thing up, but can he?

A convoluted murder/thriller starring George Kennedy? My curiosity got the best of me. I had heard or read NOTHING about this flick. Movie nerd that I am, I've read through filmographies of many actors looking for hidden gems among the more well known movies. I didn't understand why Zigzag was a forgotten movie. It does have some positives if not many. The early 1970s style is fun to watch regardless of the tone of the movie, and Roy Orbison singing the theme song (listen HERE) is a guilty pleasure. As for the story, well.....

I'm all for convoluted and twisting stories that basically force you to stay glued to the screen the length of the movie. I enjoy a story that challenges you, defying you to figure out where it's going before the secret is revealed. That said, there is typical convoluted, and then there's Zigzag convoluted. There are plot holes and jumps you could drive a semi-truck through. Kennedy's Cameron implicates himself so perfectly that he's tried and found guilty of a kidnapping and murder? Are the police that fundamentally stupid? And how quick is this trial? I thought he had a few months to live, but the film judicial system is apparently pretty speedy. Some of the efforts are appreciated, especially the non-linear opening sequence and the use of scenes cut into other scenes, some flashbacks.  Overall though, I got the feeling of trying too hard.

What kept me going through the film was the review I read prior to watching that ripped Zigzag and its ending to shreds. I'm a sucker for a stupid ending, mostly to see if I can see it coming. The "twist" is one thing, but director Richard A. Colla handles it in such a heavy-handed manner it loses all effectiveness. His use of slow motion is so ridiculously slowed down that the effort becomes laughable when we're supposed to be blown away by what we're seeing on-screen. A downer ending in the 1960s and 1970s is nothing new, but this one just ends. Game over, no other explanation provided. It is a surprise in a sense, but the techniques used to reveal that surprise ruin any chance it had of working.

Still, still....there were parts of the movie I liked. I've always been a fan of George Kennedy, and seeing him playing a leading role is an obvious bonus. In a ridiculous story, he manages to create an interesting character who even though he's doing something beyond stupid remains remarkably grounded. Eli Wallach plays his lawyer, Mario, with Steve Ihnat playing Gates, the prosecuting district attorney and William Marshall as Morris, an old friend of Cameron's and a bar owner. Mostly worth watching because of its rare availability, it certainly qualifies as a guilty 'so bad its good' pleasure.