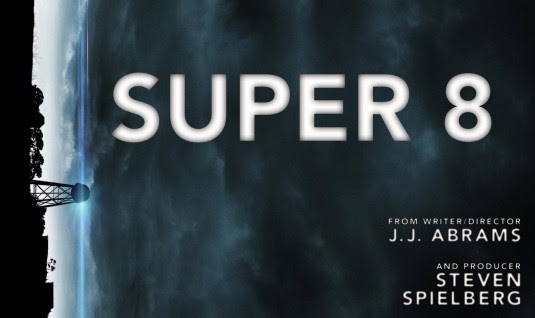 With his involvement in one of my all-time favorite TV shows in Lost, director/writer/producer extraordinaire J.J. Abrams cemented himself as a must-watch sort of guy in the movies. That was the case for his most recent movie, 2011's Super 8, when it was released last summer. Even hearing negative reviews, I was definitely intrigued by this sci-fi throwback, a movie that looked like a modern Close Encounters and E.T.

It's the summer of 1979 in Lilian, Ohio, and 14-year old Joe Lamb (Joel Courtney) is still dealing with the sudden death of his mother several months prior. He lives with his dad, Jackson (Kyle Chandler), a deputy sheriff in town. Mostly though, Joe spends his free time helping his friend Charles (Riley Griffiths) make a zombie movie with his Super 8 camera. One night while filming a scene with Charles and four other friends, they accidentally film a train derailment, and within minutes the Air Force and Army are on the scene. Weird, unexplainable things start to happen all over town. What was on the train? And more importantly can it be caught and stopped?

Like Abrams' 2008 film Cloverfield, I was sucked into Super 8 because of a teaser trailer. Check it out HERE. Mostly it's the 'what if?' factor that works so well. As was the case with some of the best episodes of Lost, Abrams' sci-fi flicks are at their best with that sense of mystery. He keeps you guessing, letting your own imagination fill in all the blanks as needed. Your imagination will almost always be scarier than what you actually ends up seeing. Super 8 isn't nearly as dark as Cloverfield in tone or depiction of an alien visitor, and the comparisons to both Close Encounters and E.T. are very, very fair. Steven Spielberg even worked with Abrams as a producer here so there's clearly a ton of talent working here.

When was the last time a movie with a big twist, a huge surprise lived up to that building anticipation? It doesn't have to be a sci-fi thriller. It can be anything. I'm guessing 9 times out of 10 I end up being disappointed with the reveal. Super 8 is one of the nine unfortunately. The fun of the movie (and the main reason I'll give an above average, positive rating) is because of the build-up, the first 80 minutes of a 110-minute movie. Those last 30 minutes? Like Cloverfield, Abrams hides the creature for the most part, only revealing him in glimpses and shadows. The full reveal just isn't as good. The unknown is always creepier than the known/visible. The whole sugary sweet tone of the last half hour just doesn't work. The creature has been tortured and abused and just wants to go home....oh yeah, he rips people's heads off too. Are we supposed to feel pity or see him get killed? The resolution is disappointing to say the least.

Drawing the comparisons to Close Encounters and E.T. is a huge positive. Setting the story 1979 serves as a great throwback addition to the story. Super 8 is a little slice of Americana in the 1970s. Lilian, Ohio is a close-knit town built around a mill where much of the population lives. It's a little town, but not too little. And in that town are a group of kids making the jump from being kids to teenagers. The performances from the younger actors are great, starting with Courtney as Joe, the quiet but well-meaning kid coping with the death of his mother. He has a crush on the seemingly unattainable Alice (Elle Fanning in an excellent, moving part) Griffiths is especially good as Joe's best friend Charles with Ryan Lee, Gabriel Basso and Zach Mills representing themselves well as the rest of the group of friends. A coming of age story in the midst of a possible alien invasion? Who would have figured that would work?

That's the main reason I can give this movie a positive recommendation in spite of the disappointing ending. It is a personal story, the story of a kid growing up in the most chaotic of situations. So even through all the craziness, there is that personal attachment and involvement with the story. Chandler does a good job as Joe's dad and Noah Emmerich is appropriately mysterious as Nelec, the Air Force commander leading the investigation, but this is a movie about the kids. Does a different ending drastically alter the overall rating? Maybe, but probably not without altering the tone of the entire movie. I'm not a fan, but I can see what Abrams is going for. Still very much worth seeing.