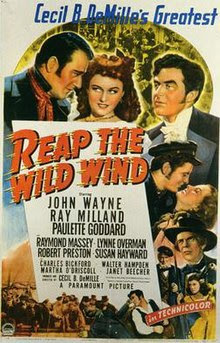 As a fan of John Wayne and just about every one of his movies in one way or another, I can appreciate that by a certain point in his career (say 1960 or so) he was basically playing variations on the same character.  Some would say he was playing himself, but I won't go quite that far.  Early in his career even after the success of 1939's Stagecoach, Wayne had not yet been pigeon-holed into one type of role so in the early 1940s, he played some roles that are different from the norm in generally forgotten movies, like 1942's Reap the Wild Wind.

Still finding his niche as an actor, Wayne gets lost in the shuffle here some with an impressive cast.  It's an impressive movie on a lot of different levels, but that doesn't mean it's a particularly good movie though. Directed by the legendary epic moviemaker Cecil B. DeMille, 'Wild Wind' feels like his answer to the classic movie released three years before, 1939's Gone With the Wind. It's lavish and extravagant with a sweeping story full of action, intrigue and romance. It plays too much like a soap opera though ripped right off a stage somewhere. Rarely bored but never truly invested in this movie, it falls short in the end.

After his ship is wrecked on the reefs near Key West, Captain Jack Stuart (Wayne) is nursed back to health by lovely Southern belle, Loxi Claiborne (Paulette Goddard), who instantly falls for him. Stuart has come under fire though, the blame being placed on his shoulders for the wreck. He is set to go on a cruise that will eventually end up in Charleston where he'll face a ruling from the company's board of directors. Looking to help the man she loves, Loxi heads to Charleston by land, looking to woo the lawyer who will look to crucify Jack, Stephen Tolliver (Ray Milland). Stephen falls for her too, and she can't help but have feelings back toward him. The situation will come to a halt though when a salvaging pirate, King Cutler (Raymond Massey), puts them all on a course to meet on the high seas on the company's new steam ship, the Southern Cross, as it heads toward the dangerous Key West reefs.

The story ends up playing out like an average, even at times bad, soap opera. Overacting is around every corner, the love triangle is always tumultuous with all sides swearing they're right, and no one is going to give in easily. It's a big movie, living up to an epic status, with gigantic sets adorned with detail, costuming period accurate, and extras filling the screen. DeMille's film had the biggest budget of any film made since Gone with the Wind, and he spends it well.  Visually (even with some bad green screen shots), it is a great movie to watch. The story doesn't keep up though, and you're left waiting for everything to resolve itself.  I was willing the movie to move along a little quicker as the 123-minute run time dragged on endlessly.

So even if the story is too ridiculously over the top to take seriously, the cast is nothing to shake your head at.  Ray Milland is the real star here, dominating the movie with Goddard. He's painted as the upper class businessman, but that's quickly thrown out the window.  It's built up as this great rivalry with Wayne's Capt. Jack, but nothing develops there. Wayne's character is window dressing which is disappointing for me as a fan.  Massey is perfectly cast as Massey, I mean King Cutler, the villain who sneers and glares his way through line deliveries.  As if those three names weren't enough, Robert Preston is along for the ride (and given little to do) as Dan Cutler, King's little brother and business partner. Lynne Overman gets to ham it up too as Capt. Phil Pillpott, a veteran of the seas always ready with a dig or a barb.

While the male characters aren't developed much and are probably the better for it, the female characters are not so lucky.  It's interesting that the two main female roles -- Goddard and Susan Hayward -- were both passed over for the role of Scarlett O'Hara for GwtW. I've never seen Goddard in another role (that I remember at least), but based on this part, I won't be seeking her out too much more. God bless her, she's a pretty girl, but she's an awful actress. She chews the scenery in each and every scene, pulling off both her acting faces, the sly, sweet Southern belle and the screaming terrified woman gone batty.  There's little middle ground either, it's one or the other. I felt bad for Hayward who's character has nothing to do but fall for Preston's Dan in a wasted subplot and then serve a purpose late. It's a wasted part for a talented actress.

Trying to save the best for last, 'Wild Wind' surely gets points for effort in the finale. A sizable portion of the budget was used to construct a giant squid that attacks Wayne and Milland as they go diving for the wreck of a ship. The underwater sequences -- giant squid attack included -- are impressive for 1942 considering all those things actually had to be filmed.  It is an ending that obviously left an impression as it was almost exactly reused several years later in another John Wayne flick, Wake of the Red Witch. Reap the Wild Wind also belongs to a rare club of John Wayne movies, but I can't give too much away here. I didn't like this movie much, but it does try and almost lives up to its own high expectations.