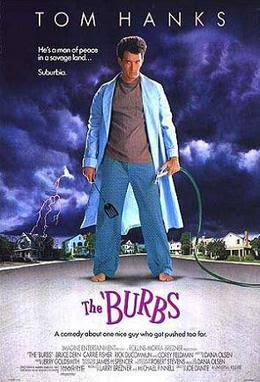 Before he was one of the most bankable and most well-respected stars in Hollywood, Tom Hanks was just another actor in the 1980s with a handful of comedies and a TV sitcom under his belt. Seeing what a huge star he is now, it can be interesting to look back on some of those 80s comedies, one of which never fails to make me laugh, 1989's The 'burbs.

More of a dark comedy with a fair share of silly touches, The 'burbs explores the basic idea that no one knows their neighbors too well. Who knows what's going on in their basement in the middle of the night? Then add to the setting the normal weirdness of living in the suburbs, and you've got something going there. Movies like Rear Window and Disturbia used similar storylines, but both of those movies were played seriously. 'burbs puts your average suburbanite in an odd situation and lets the story play out with sometimes hysterical results.

Taking a week off from work, Ray Peterson (Hanks) plans to sit around the house and be lazy with his wife Carol (Carrie Fisher) and 'get back to normal.' But next door, the neighbors, the Klopeks, seem to be up to something crazy, with blinding lights and odd sounds coming from their basement. Ray's neighbor Art (Rick Ducommun) is convinced that the Klopeks are part of some sort of satanic cult, killing people and burning their bodies in the basement and then burying the bones in the backyard. Ray is more than a little skeptical, but the clues continue to come up. Even then, it's only when one elderly neighbor disappears that Ray starts to believe something fishy is going on.

With some help from across the street neighbor, Mark Rumsfield (Bruce Dern), a Vietnam vet, Ray and Art plan to investigate the Klopeks house and see exactly what's going on. The fun and mystery of it all is that you're never quite sure what's going on at the Klopek's house. Sure, there are clues that there's something funny transpiring, but Art and Rumsfield are more than ready to jump to conclusions. The movie is set entirely on this one cul-de-sac and never leaves this stretch of houses. It's self-contained in the suburbs, and overall gives a good sense of the general weirdness of a suburban neighborhood.

What works so well when it comes to the laughs is that no one tries too hard. Most of the laugh out loud humor comes from the dialogue, little throwaway lines here and there that you almost miss. Here's IMDB's memorable quotes with some semi-SPOILERS. The story waits until the last 30 minutes to really ratchet up the craziness as Ray and Art jump over the fence to investigate while the Klopeks are away on a day trip. The comedy goes from dialogue to physical, including one bit with Art trying to knock out the Klopeks' alarm system among several other winners.

With Hanks playing straight man to all these suburban shenanigans, it's the rest of the ensemble cast that makes the movie memorable. Hanks is good as the everyman trying to lead his life, but he leaves most of the laughs to Ducommun and especially Dern. Playing a Vietnam vet, Dern is hysterical, not afraid to ask questions or do things the rest of his neighbors are not. With his trophy wife Bonnie (Wendy Schaal), Rumsfield is my favorite of the Mayfield Place neighbors. A vet of '18 months in the bush,' he still wears the uniform and is outfitted with all sorts of weapons. Setting up an observation post late in the movie, Rumsfield quietly sits on his roof, drinking some coffee and eating animal crackers. He doesn't say a word, but it's priceless regardless. Here's another of my favorites, Dern 'directing the operation' with some pitch-perfect delivery.

While Ducommun and Dern steal the show, the rest of the cast doesn't disappoint. Fisher plays the worrying wife who along with Schaal's Bonnie is convinced nothing is going on. Corey Feldman provides some good laughs as Ricky Butler, the street's resident stoner who loves nothing more than watching his neighbors' crazy antics. Then, there's the Klopeks, who I've debated revealing. So if you don't want to know who they are, skip ahead to the next paragraph. Henry Gibson is Dr. Werner Klopeck with a great entrance about halfway through the movie with Brother Theodore as his brother Reuben and Courtney Gains as Hans, the red-headed youngster with the gnarly-looking sideburns.

So is this the movie for everyone? Probably not. The humor can be kind of off the wall, but if you have a dark sense of humor The 'burbs is probably right up your alley. Great cast especially Hanks, Ducommun and Dern with some truly laugh out loud moments.