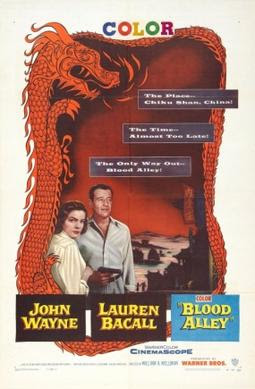 As a huge fan of John Wayne, I can still say that I didn't always agree with the man's politics.  He was a staunch Republican who didn't really care who he pissed off with his beliefs, and often enough these beliefs made their way into his films.  Some were good movies unaffected by a message delivered, like Rio Bravo, but others fall short partially because of these rather odd insertions.  In one of the more tumultuous times in American history in the 20th Century as the U.S. dealt with McCarthyism, Communists, and the Cold War, Wayne used his stardom in a handful of movies that now seem incredibly dated as they attempt to demonize Russia and Communists.

The movies range from straight propaganda like Big Jim McClain -- a movie so bad that it is good -- to others that were slightly...slightly...more subtle.  A not so thinly veiled at Communism and everything negative about it, 1955's Blood Alley isn't completely done in by the attempt, but it sure doesn't help. Lack of subtlety aside, it's just not a very good movie.  Through the 1950s maybe more than any other decade he worked in, Wayne was very much so a hit or miss star.  For every 'The Searchers' or 'Rio Bravo' there was The Conqueror where he played Genghis Khan or Jet Pilot, another dig at Russia and those clever Commies.  'Alley' certainly is a change of pace, but not a good one.

After two years in a Chinese Communist prison, ship captain Tom Wilder (Wayne) escapes with some unknown, outside help only to find he's being recruited.  A village under Communist control is seeking to escape from its life of misery, and all they can come up with is one desperate plan.  Wilder will hijack a ferry that travels up and down the rivers, transporting all 300 villagers to Hong Kong where they will be out of the grasp of the Commies.  The plan is basically suicidal, but Wilder for some reason agrees to help, maybe because of the pretty daughter (Lauren Bacall) of an American doctor working nearby.  The odds are against any sort of success on the mission, but given a crack at doing something right, Wilder takes his chance, odds be damned.

A story set in 1920s China is nothing new to movies, but one example -- a much better example -- kept coming to mind, 1966's The Sand Pebbles.  There was an epic scope, a huge cast, a worthwhile message, all working toward the same goal.  Here with Blood Alley, director William Wellman just never puts it all together although I question if all the composite elements were every really there to be molded.  There isn't so much a story as a series of scenes with Wayne and Bacall talking, followed by some efforts to obtain the ragged-looking ferry, and then an hour or so of said ferry going down the river to safety.  There's no conflict, no bad guys pursuing them, no real threat of danger so what's the point of it all?

In another case of the odd casting department, Wellman goes all out both in terms of actual casting but then how the Chinese are portrayed.  White actors Paul Fix, Mike Mazurki, and Swedish cutie Anita Ekberg all play...you guessed it, Asian characters, awful eye makeup and horrific accents included. I've asked before, and I'll probably ask again, but there weren't any Asian actors available for these laughably bad parts?  The few Asian actors actually cast, like Joy Kim as Susu, Bacall's maid, and Henry Nakamura as Tack, the ferry engineer, are definitions of what playing an Asian stereotype is in older movies.  These portrayals aren't offensive or anything of the sort, but you just feel embarrassed watching them just the same.

Wayne and Bacall would reunite a little over 20 years later in The Shootist for Wayne's last movie.  The duo showed off a perfect chemistry as the two pros played off each other like peanut butter and jelly.  Their scenes carried the movie, and it was a treat watching them do their thing.  Some 20 years earlier, that same chemistry just ain't there yet.  Wayne seems to be sleepwalking here and just doesn't deliver one of his better performances.  Bacall was as sexy as ever and is a great actress, but a poorly written part has her doing nothing but looking worried or distressed.  In The Shootist, their almost 15 year age difference wasn't an issue, but here Wayne looks much too old for the 31-yard old Bacall. There's also Wayne's address to the villagers, imploring them to think for themselves and not listen to "the old man"....cough Communism cough.  Subtle it is not, more like a sledgehammer landing.

As for winding this bad boy up, one more complaint.  With a story set in 1920s China, a fair amount of Chinese is spoken.  Makes sense to me.  No subtitles are there as the "bad Chinese navy" mumbles and screams through their lines (comic relief maybe?) or as any of the Chinese characters interact.  So on top of the long, unedited sequences of a ferry going down a river, there's also long shots of characters speaking in a language where no explanation is offered.  This is one of the few Wayne movies I'd never seen before, and I'm kinda glad it's out of the way now.  Pass on this stinker.