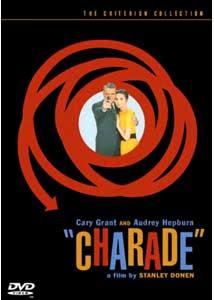 Cary Grant was as cool and smooth as any Hollywood actor. Audrey Hepburn was an iconic actress known for her style and she's adorable. Do we really need a reason to put these two stars in a movie together? Not really. Any movie with the duo has an appeal right off the bat, and it doesn't hurt that their only pairing together -- 1963's Charade -- did not just settle for their charm bringing in the audiences.

A blend of comedy, romance and spy thriller, Charade has the distinct feel of a Hitchcock movie, even the opening credits have the look of a Hitchcock.. With all that genre blending going on, a movie has the potential to overload. That's not the case here as the plot weaves in and out from romance to comedy to oh so ghastly murders. But hey, it's in Paris so who cares? There's so many switches and betrayals and misdirections, it can be difficult to follow at times but it is never enough to distract from what is an otherwise highly entertaining, stylish, well-made movie.

On a ski vacation in Switzerland, Regina Palmer (Hepburn) debates whether she should leave her husband, Charles, who always seems to be away on work. She meets Peter Joshua (Grant) and strikes up a conversation with him, telling the mysterious stranger to look her up if he's ever in Paris. But returning home, Regina finds out from French police (Jacques Marin) that Charles has been murdered. At her husband's funeral, three complete strangers show up to 'pay their respects.' There's Tex (James Coburn), a drawling cowboy, Scobie (George Kennedy), a bear of a man with a hook for a right hand, and Gideon (Ned Glass) a nerdy-looking fellow.

Not sure what is going on, Regina visits a CIA agent at the American embassy, Hamilton Bartholemew (Walter Matthau), to try and figure out what is going on. Bartholemew tells Regina a story that makes her think she never really knew her husband. Late in WWII, Charles, Tex, Scobie, Gideon and a fifth man, Carson Dyle, were guarding a gold shipment -- $250,000 -- to the French resistance but they buried it and says the Nazis took it. Now, it looks like Charles was going after the gold, and the other three think Regina has it now. She turns to the only person she thinks she can trust, Peter Joshua.

Handled by director Stanley Donen with a tongue-in-cheek feel, Charade is a stylish 60s thriller that highlights the onscreen charisma of its two leads, Grant and Hepburn. Grant was 59 when the movie was made, a little older than your typical romantic lead, but it's hardly noticeable whether it's the action scenes or the love scenes with Hepburn. As the damsel in distress, Hepburn gets to show off some of her comedic chops (I was surprised by how funny she was) while also handling the chase scenes well. The movie's success hinges on the chemistry between the two, and surprise, surprise, Grant and Hepburn pull it off with some great dialogue exchanges throughout.

With the whudunnit story though, there's one pretty major flaw that is hard to avoid. As the bodies start mounting in the search for a quarter million in gold, the clues and evidence point to Grant's Joshua as the culprit. The problem is this...Cary Grant just can't be a murderer. I'm usually pretty slow when it comes to figuring twists out, but this one was easy. I might not have known the 'why' but I figured the 'who' pretty easily. That doesn't take away from the fun though as two twists in the last act don't come across as forced like some twisting storylines tend to do. The final scene is particularly good because there are no hints/clues at all that would have led to this revelation. Sometimes it is fun just to let a movie pull you along, so sit back and enjoy.

This is a movie that's fallen into the public domain so beware of those cheap, low quality DVDs that pop up. I saw one of the lesser quality prints on TV and was still able to enjoy it, but if you're looking for the most watchable version look for the Criterion Collection DVD which is a little pricey but worth it in terms of quality. Or if you're looking to save some money, Youtube has it available to watch, starting with Part 1 of 12. This is the lower quality version so be forewarned.