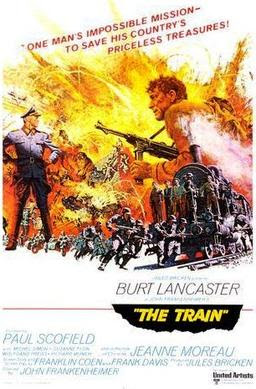 It's rare that you find a movie that's just the perfect blend of action, drama, story and character. And to find it in a war movie which usually concentrates on one or two of those things? Even better. Director John Frankenheimer accomplished that, making maybe the perfect war movie, 1964's The Train, a tale of French resistance fighters in WWII in the days leading up to the fall of Paris.

In another casting choice that might seem odd, Burt Lancaster stars as Paul Labiche, a French railroad supervisor who is also a member of a small group of resistance that started the war with 18 members, but is now down to just three. An art museum curator, Mademoiselle Villard (Suzanne Flon) comes to him with a plea. The retreating Germans have boxed hundreds of famous paintings, Renoirs, Gaugins, Picassos, Van Goghs, and are putting them on a train heading deep into the Third Reich. Villard desperately requests Labiche and his men, Didont (Albert Remy) and Pesquet (Charles Millot), slow the train up enough that the advancing Allies can overtake it before it gets into Germany. Going up against a driven German colonel, Von Waldheim (Paul Schofield), who appreciates the beauty of the art, can the Resistance pull the job off?

I'm struggling to come up with many examples of war movies that so seamlessly blend a message with so many incredible action sequences, but The Train does it beautifully. Labiche and his men unwillingly join in on the plan to halt the train, all the while questioning if it's worth it. They're told the paintings are the 'heritage of France' but is the collection worth their lives? It's this question that haunts Labiche as the bodies start to pile up. What makes it more effective for these characters? They believe in the idea of the paintings. Didont admits never seeing any of them previously and tells Labiche when they complete their mission, 'we should have a look at the paintings.' He believes their mission is a necessary one, even if he and the others might not understand why.

As hundreds of Frenchmen along the rail line help the cause and the Germans begin to retaliate, Labiche meets Christine (Jeanne Moreau), a hotel owner still struggling with the loss of her husband. It's Christine who helps him realize the futility of what they're doing. Is it worth it to die for a painting? Some think so. But I found myself asking is Labiche continuing with his effort because he believes in his mission, or because he has to continue for the cost that's already been paid? It's that question that drives Lancaster's character, one of his best performances from a distinguished career.

Now onto the ridiculously good action sequences, and remember no CGI in 1964 for Frankenheimer. So many movies can be good, but that doesn't mean they're entertaining to watch. As a director, Frankenheimer has a flair for shooting action, even making tracking shots of characters walking through a trainyard or a busy German HQ memorable. SPOILERS if you're going to watch this clip, but imagine this scene made today in 2009. I'm thinking cheesey, ridiculous looking CGI trains. Frankenheimer crashes 3 trains at some pretty good speeds! But that's just the start, check these out too, a Spitfire chases Labiche in a locomotive, and an Allied bombing mission on Labiche's rail yard, in Spanish but it's for the visual.

Leading an otherwise mostly French cast, Lancaster does double duty for his part. He's the one who wavers in his decision to help the effort to stop the train. It seems ridiculous to him to work to save art when he could be doing any number of things to help the war effort. Looking at the action aspect of the movie, Lancaster, a stunt man before he was an actor, goes back to his roots as you could see in the bombing mission clip, 1:14-1:32. No cuts where a stunt man jumps in, Lancaster slides down that 25-foot ladder, lands smoothly, and boards a fast-moving train. I don't know what else to say. That's just badass.

As his opposite in the cat and mouse game to save the train, Schofield as von Waldheim matches Lancaster, no easy feat, in every scene. Expected to think of the paintings as degenerate art, Waldheim sees what a treasure the collection really is. But even then, he has to convince the High Command that the paintings are worth something, not just on a cultural level. He becomes obsessed with getting his train into Germany and meets his match in perseverance in Labiche.

The supporting cast is equally strong, especially Moreau as Christine and Remy and Millot as Lancaster's resistance partners. Michel Simon gives a memorable if short turn as Papa Boule, a veteran engineer who's convinced by others the importance of the train and starts the slowing-up effort. Regulard contributor to WWII movies as the requisite tough German officer Wolfgang Preiss plays Major Herren, an officer trying to help Waldheim even if he may think his superior has lost it.

Well, I've done my fair share of rambling about this movie, but it's really one of my favorites. The Train does everything right from beginning to end with a great story, developed characters that change over the course of the movie, impressively staged action, and some great French shooting locations. If you've missed this in the past, definitely check it out.
Posted by Tim at 11:03 AM