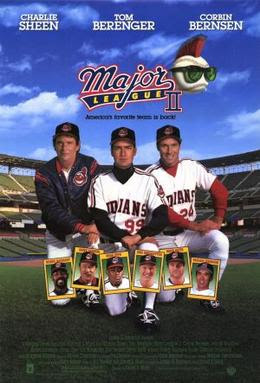 I love 1989's Major League. It's one of my all-time favorite sports movies, a great story of a bunch of screwball underdogs working together to overcome an owner trying to move the franchise. A baseball movie that's very funny with a ton of great characters and one-liners. Naturally, a sequel came along some five years later, 1994's Major League II, and it's nowhere near as good. On the other hand....it's still a baseball movie, a funny one, most of the characters are back, and though it is bad, I still love it.

Having won the division the year before, the screwball Cleveland Indians are back and ready to take another run at the World Series. The Indians came up short in the playoffs the previous season -- swept at the hands of the Chicago White Sox -- but retired third baseman turned owner Roger Dorn (Corbin Bernsen) has brought back the core of the team, including fireballing pitcher Rick "Wild Thing" Vaughn (Charlie Sheen), veteran catcher Jake Taylor (Tom Berenger), fleet-footed outfield Willie Mays Hayes (Omar Epps) and slugging outfielder Pedro Cerrano (Dennis Haysbert). Dorn even signed a slugging, free agent catcher, Jack Parkman (David Keith), to bolster the lineup. Everyone and everything seems posed for a great season and hopefully a big postseason run, but have the Indians become complacent? Manager Lou Brown (James Gammon) certainly has his work cut out for him with this bunch.

Did you like 1989's Major League? No? What the hell is wrong with you? I'm guessing you hate America and/or baseball. Maybe both. If you answered 'yes,' then you're going to enjoy this movie too. Director David S. Ward returns from the original to direct this sequel which will appease and entertain a lot of fans because....well....it's the same movie. Yeah, yeah, some things are tweaked, but it's basically the exact movie. This season the Indians start off as front-runners, hit an epically rough streak, and then have to turn things around to get back into the playoffs. It should feel familiar -- even a little phoned-in at times -- and while it isn't on the same level as its predecessor, it is funny, entertaining and a solid if unspectacular sports movie.

A big reason it's worth putting up with some of the stupid laughs is because the characters are back. Amidst all the laughs and baseball goofiness of the original, the characters were likable (sometimes in spite of themselves). The success of the previous season has gone to the Indians' heads though, starting with Wild Thing who's now trying to clean up his image with the help of girlfriend-agent Flannery (Alison Doody). Oh, and he's lost some heat off his fastball. Veteran catcher Jake Taylor finds himself on the bench as a coach when the Indians decide to bring up a young talented catcher to backup Parkman. Replacing Wesley Snipes, Epps is solid as Willie Mays Hayes, base-stealing outfielder who's turned himself into a power hitter....and B-movie action star. Haysbert's Cerrano has forsaken his voodoo ways, turning to Buddhism and losing his ability to hit in the process. As cantankerous manager Lou Brown, Gammon is hilarious -- not surprising -- as he progressively loses his mind with his underachieving players. Playing owner-third baseman Dorn, Bernsen makes the most of a smaller supporting part.

What would a Major League sequel be without the triumphant return of Milwaukee Brewers radio man Bob Uecker as Harry Doyle, the Indians radio play-by-play guy who lives and dies with how the team does. His brutally honest banter is beyond perfect, usually questioning what the hell is going on out on the field. He has some great scenes with virtually silent partner, Monty (Skip Griparis). There aren't as many ridiculously funny, memorable lines as the original, but that's a relative complaint. How could you not love 'And the Indians have a base runner.....I think I'll wet my pants" or "He'll need a rocket up his ass to catch that one." It's his perfectly subtle, underplayed deliveries that work, and seeing him drink on-air more and more as the Indians go under is beyond perfect.

How about some additions to the team though? David Keith is the ideal egotistical star player as Parkman, the star free agent catcher. He's interested in himself and his stats, and he isn't going to be long for the Indians. Eric Bruskotter is a scene-stealer as Rube Baker, the young minor league catcher trying to make it with the big league team. He has a problem though....he can't throw back to the pitcher. Baker also just loves the game, and it rubs off on his teammates. Takaaki Ishibashi plays Kamikaze Tanaka, a Japanese outfielder trying to get his teammates, especially peaceful Cerrano, to embrace "their marbles." Think about it, you'll get it. Also with his fair share of memorable scenes is Randy Quaid as Johnny, a superfan who goes up and down with each game the Indians played. Rene Russo makes a quick, blink and you'll miss it appearance as Lynn, Jake's wife, while Margaret Whitton plays Rachel Phelps, the Indians former owner who reappears at the worst possible time.

Does it all work? No, especially Wild Thing trying to reinvent himself as a clean-cut salesman. His scenes with Flannery and former fling, Nikki (Michelle Burke), drag down the story to a snail's pace, especially because Nikki works with underprivileged kids. Yeah, a message! And with a 105-minute movie and so many characters, things feel rushed at times. Characters get brushed aside too often for long stretches, and there's never really a doubt where the story's heading. That said, it's a bad good movie. You know it's bad, but it's enjoyable from beginning to end.