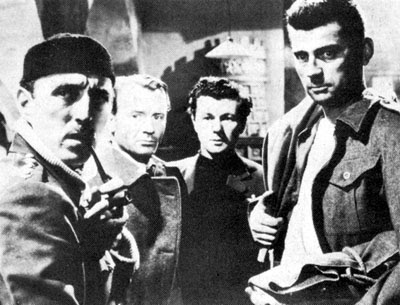 I started reading about history pretty early in grammar school and never really stopped.  I was introduced early to The Great Escape -- the book and the movie -- and 40 or 50 viewings later, it is still one of my two favorite movies.  The story of Allied prisoners of war during WWII has translated well to both book form and movies in the 60-plus years since the end of the war, some more well known than others.  I've seen a fair share -- Bridge on the River Kwai, Stalag 17, King Rat -- among others, but I always keep an eye out for ones I've missed, including 1955's The Colditz Story.

Like The Great Escape, this WWII P.O.W story is based on the actual escape attempts of the prisoners from their German captors.  The start of the WWII brought up the question for both sides; what to do with captured prisoners? The Geneva Convention provided for the treatment of prisoners, but there was still the matter of housing and feeding the thousands of prisoners on either side.  A prisoner's right and responsibility was to try and escape so the German Luftwaffe was forced to improvise.  One of the most infamous prison camps was in the town of Colditz in the Colditz Castle, a medieval building reserved for only those prisoners dubbed the most dangerous, those most likely to escape. A recipe for a successful POW movie if there ever was.

It's summer 1940 and two British officers, Captain Pat Reid (John Mills) and Mac McGill (Christopher Rhodes), have been captured by the Germans and sent to the prison camp at Colditz Castle deep in Germany. There they find only two other British officers, Pat Tyler (Lionel Jeffries) and Jimmy Winslow (Bryan Forbes), who they quickly hit it off with.  It's not long before truckloads of new prisoners arrive, including a senior British officer, Colonel Richmond (Eric Portman), who doesn't seem interested in escaping. In the crowded supposedly inescapable prison, the Brits go to work on their escape attempts, but coupled with the efforts of the French, Poles, and Dutch, end up stepping on each others toes.  With help from Richmond, the diverse group of prisoners begin to work together in their escape plans, all with the hopes of someone hitting a "home run" and making it all the way to Switzerland.

Mostly known and respected for some of the earliest and best James Bond movies, director Guy Hamilton makes an entertaining, somewhat atypical war movie here. For being supposedly an inescapable prison, Colditz actually had its fair share of successful escapes over the course of WWII so right off the start Hamilton is working with a story that maybe -- just maybe -- could end on a positive note.  The movie was filmed on location in Colditz (a nice touch), but I'm not sure how much and where.  Regardless, it gives the story an air of authenticity as we're seeing the actual buildings these events took place in.  Mills' character Pat Reid was an actual escapee from Colditz and wrote several books about his time in the prison so the story feels truthful and authentic in dealing with the facts.

Like other POW movies focusing on escape, the story isn't the most linear thing around.  It tends to bounce from escape attempt to escape attempt rather than focusing on one specific plan devised by the prisoners.  This could have ended with a bloated, overlong movie, but at just 97 minutes, Hamilton picked an appropriate run time.  He wastes little time early on, introducing his characters and the setting and moves on to what viewers want to see; the Allied prisoners cleverly trying to escape from their German captors.  Just the sheer audacity in which these prisoners make their attempts is impressive.  They had no fear, no worries about consequences and repercussions.  Watch one stupidly brave attempt HERE. These prisoners would try anything to escape, and that's maybe the most amazing thing about the story of this movie. These things actually happened.

Telling the story of a multinational group of Allied prisoners allows Hamilton to assemble a cast of multinational talent to fill out his ranks.  Mills leads the heavily British cast as Pat Reid, a prisoner who becomes "escape officer," basically a coordinator of escapes who by taking the position agrees not to attempt an escape on his own.  I like Mills as an actor on-screen because he has a knack for making his characters likable with little effort, and his Reid definitely is a prisoner you're rooting for.  Portman as Colonel Richmond too is a scene-stealer, the stiff upper lip British officer who'd like nothing more than to break out as many prisoners as possible.  Rhodes, Jeffries and Forbes are all solid as fellow British prisoners, especially Rhodes as a prisoner who may be too tall to escape.  Frederick Valk plays the German commandant at Colditz and Denis Shaw plays Priem, a German ferret assigned with rooting out any and all escape attempts.

Because of my love for The Great Escape, I'm a sucker for like-minded movies like this one.  It was a British production so it is not well known outside of England, but because it deals with the facts of being a WWII prisoner, it's easy to see the blueprint it laid out for prisoner of war movies yet to come.  Filmed in a stark black and white on location in Colditz, this flick doesn't do anything great and isn't as flashy as The Great Escape or epic as River Kwai.  But it is the truth in the story it tells that makes this movie worthwhile.