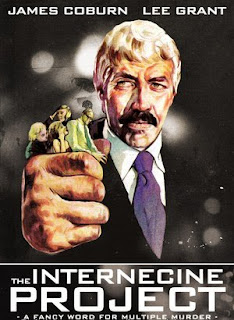 If a movie has a gimmick, is that a bad thing?  3-D filming comes to mind, an actor/actress playing against type in a major way, a twist that no one sees coming, and many more I'm probably missing.  Sometimes that gimmick can hold an otherwise dull or average movie together and make it worth watching.  These gimmicks tend to gravitate toward thrillers, horror and action movies, but that's a general blanket statement.  They can be in any type of movie.  Generally forgotten since its release, 1974's The Internecine Project has a gimmick, and a good one at that.

This British production is interesting in that it presents a unique idea and executes it in one of the most ridiculously boring sounding sequences.  I won't spoil what it is yet, but does a man sitting in his office waiting for a phone to ring at a preordained time over the course of several hours sound interesting at all?  You wouldn't think so, but that's part of why 'Project' works so surprisingly well.  It's not groundbreaking or anything that new, but the murder mystery thriller keeps you guessing until the end when an appropriate twist ending is delivered.

About to receive a government advisor position after years of working in economic theory as a Harvard professor, Dr. Robert Elliott (James Coburn) is approached by a highly powerful and high ranking government official who also seems to have some ties in big business, E.J. Farnsworth (Keenan Wynn).  Elliott has a bit of a shadowy past during his years as an operative for the government, and these people would stand to take him down if he gains this position of power.  The only solution? Kill them.  But how can he do it without arising suspicion that he did it?  Elliott comes up with an ingenious plan that has these four people unknowingly killing each other.  The deadline is approaching though, and Elliott has little time to accomplish his task when an ex-girlfriend, a respected journalist (Lee Grant) shows up on his doorstep.

This is the type of story that keeps you guessing as to where exactly it is going through the first 30 minutes.  You know something's coming down the highway right at you, but what exactly?  When it is revealed, the simplicity of it is what makes it work.  Elliott needs these four dead and in a great handful of scenes goes to each of them (including Harry Andrews, Ian Hendry, Michael Jayston, and Christiane Kruger) explaining what they have to do to remain safe.  All of the murders will take place in one night in a 3-4 hour window with Elliott telling each of his dupes/victims to call him at a certain time and let the phone ring a specified amount of times.

And that's where the gimmicky scene of Coburn sitting in his office waiting for his private line to ring begins.  It's a scene that goes on almost 30 minutes as the four go about their business, sneaking into an apartment or office while another person is doing the same in their apartment.  All the while, Coburn's Elliott sits in his office with a checklist, crossing them off as the quartet calls him with updates.  The plan is simple but depends almost completely on timing so when the phone rings more or less than expected, Coburn of course gets nervous.  The scene is incredibly high on tension in a way I would have never thought possible.

This is the type of thriller though where you're fulling expecting a twist.  Sometimes the best twist can be not seeing it coming at all, but others just beg to reveal something or surprise the audience at the end.  'Project' from the get-go feels like a movie that is going to pull the carpet out from under you at the last possible second, and in the last five minutes it certainly does not disappoint.  I debated even making this comparison, but it reminded me a lot of 1972's The Mechanic.  Both endings caught me by surprise in their execution, but that last twist, that last surprise works beautifully here.

With a twisty story like this, the cast can tend to be replaceable whether it be the star or one of the supporting players.  I like the choice of Coburn in the lead because he always showed an ability to play the charming hero or the villainous bad guy.  As Elliott, he's a bit of an evil mastermind, but he's so smooth doing it you find yourself rooting for him -- or I did at least.  You need someone leading the way in a story similar to this, and Coburn does it well.  The movie is available on a good transfer on a recently released DVD if curious.